There was a Visi-Lad who was in the Legion Academy and part of the new Legion of Substitute Heroes! 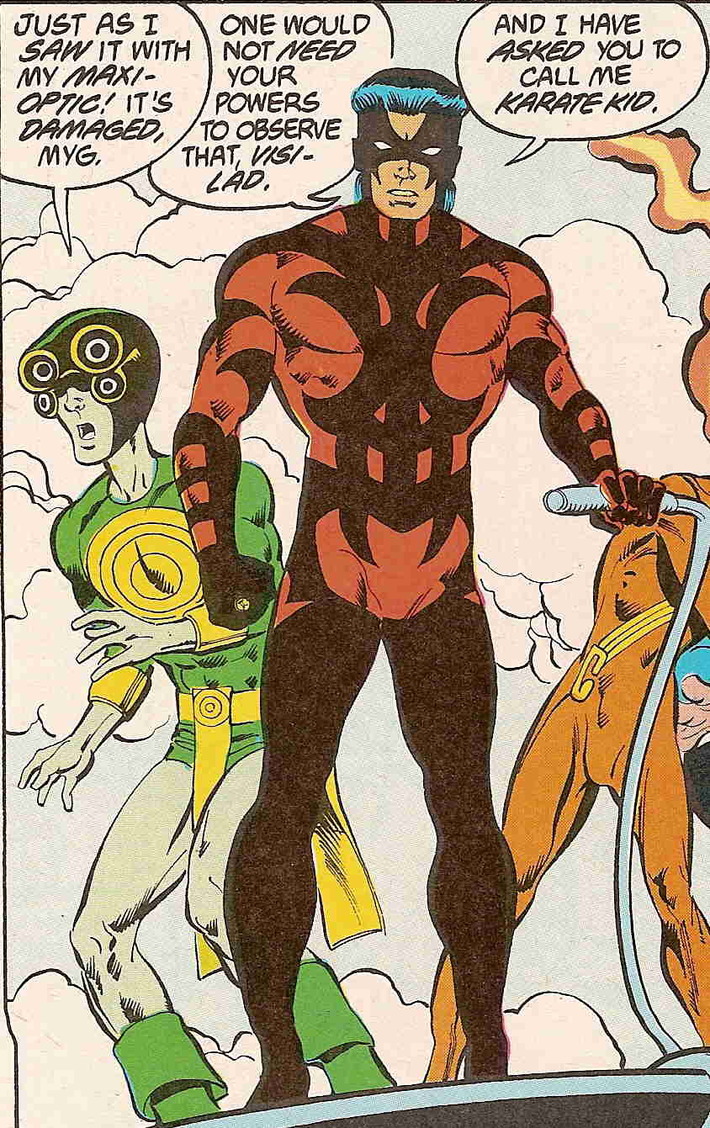 Yeah, I haven't been able to find anything either. It may be my imagination. Maybe I was thinking of Sensor Girl?

And didn't Lori turn out to be Glorith? Or was that only in the 5YL version?

Visor Girl rings a bell... but I haven't been able to find anything by googling.

Nice catch, Philip! I'd forgotten about that guy!

And I think you're right that Lori eventually became Glorith, or the Time Trapper. Her wikipedia entry lists the Time Trapper as one of her identities. But who knows what the new one would be like!

A new picture of the Legion was released last night on Late Night with Seth Meyers. Looks like Visor Girl is Luornu! 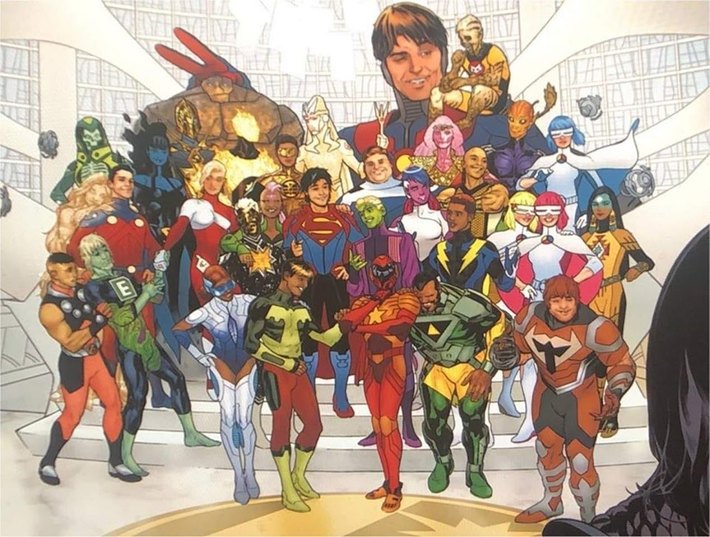 And aren't there various versions of the Time Trapper? I remember one story -- it might have been a miniseries -- where Cosmic Boy turned out to be the Time Trapper. There have been others, but I tuned out after the second or third reboot.

Will it ever all make sense?

Forget it, Jake. It's Time-a-town.

Ha ha! Too many Trappers on the dance floor!

Lightning Lad and Bouncing Boy seem to have changed race.  And is that Dr Fate in front of Blok??

Ultra Boy and Element Lad have changed color, too. Maybe some others. Several formerly white dudes are now non-human, too, like the fire guy I'm guessing is Sun Boy.

I don't mind a bit. The Legion was created in 1958, and back then white was the default. They had occasional variations -- green (Brainiac 5), orange (Chameleon Boy) and blue (Shadow Lass), but no black Legionnaires until Tyroc. If the Legion were created today it would look like the above. And since this has to sell to today's audience, it has to reflect what readers want.

Oddly, when I think about what a Legion would really look like in the 32nd century (assuming 1,100 years of expansion into space), what I come up with is the Shi'Ar Imperial Guard. Too bad Cockrum took all those over to Marvel!

Oh yeah... I'm ok with the diversity. And I'm glad Bendis has been focusing on so many female characters.  I just mean that those character's races are different from the earlier promo image that we saw.

A few other things:

Mon-El is being snuggled by ... Dream Girl?!?? With Shadow Lass standing right there, so I guess that couple is retconned away.

Both M-E Lad and Timber Wolf are considerably chunkier than before. Well, kids today ...

I don't see any reason Dr. Fate -- well, the Helmet of Nabu -- wouldn't make it to the 32nd century. It's already been around for four or five centuries.

That does raise the issue of other long-lived/immortal characters from our time. Some stories posit Martian Manhunter as essentially immortal, the mental repository of the entire race, so he could be there, but isn't. What about Andrew Bennett? Red Tornado? Amazo? Robotman? Negative Man? That angel that was part of Morrison's Justice League? What about some Hawks from Thanagar? And did they ever explain why there's no Green Lantern Corps in the future?

There's probably more I'm not thinking of. Of course, Wolverine is there, only they call him "Timber Wolf."

I wonder if the guy behind Superboy to the left could be some type of Lantern.  And who is the odd fellow on Colossal Boy's shoulder? He looks like some sort of animal hybrid (maybe a cheetah) and there appears to be an animal symbol on his chest.

Also, I wonder if the woman between Superboy and Star Boy could be Glorith.  One of the more recent versions of the Legion included a Glorith with similar markings on her forehead.