Oct. 21, 2021 — DC FanDome, the DC Comics/Warner Bros. online convention, streamed Oct. 16. It was three-and-a-half hours of TV and movie stars, trailers, announcements and more — and I watched it all, so you don’t have to!

Seriously, it was a lot of fun. It was a bit short on serious announcements, but chockablock with star commentary, teasers, songs and previews. Here are the lasting impressions it made. (Or as many as I can squeeze in.)

AQUAMAN AND THE LOST KINGDOM

An action-packed trailer shows that both villains from the first movie — Orm (Patrick Wilson) and Black Manta (Yahya Abdul-Mateen II) — return. But Orm seems to be Team Aquaman now.

FanDome showed a clip of episode 2 that includes the song “Talking to the Fish.” It’s no “Agatha All Along,” but you can check it out on Spotify.

Favorite lines (from the clip):

Aquaman (Cooper Andrews): “I’ll have to talk to the only people who don’t think I’m a total joke. People who are not people. People who ...”

Favorite line: “One of my elevator pitch versions of this show is that’s more Batman: The Animated Series than Batman: The Animated Series. It kinda goes back to the original principles of the show that we originally came up with back in the early ‘90s. There were certain limitations on what we could in terms of adult content, in terms of violence and adult themes. And my idea is that it’s 1990 again, and I get to do what I wanted to do this time.” — Timm

Robert Pattinson stars in The Batman, but he doesn’t say “I’m Batman.” He says “I’m vengeance,” while he’s beating up a crook. (Courtesy of Warner Bros. Pictures/ ™ & © DC Comics)

If you haven’t seen the trailer yet, I’m sure you will soon — and you should, because it’s awesome. We meet a brutal, nihilistic Batman (Robert Pattinson), a tricksy Catwoman (Zoë Kravitz), Commissioner Gordon (Jeffrey Wright), Alfred (Andy Serkis), Oswald Cobblepot/Penguin (Colin Farrell) and a serial killer named Riddler (Paul Dano).

Favorite line: “Fear is a tool. When that light hits the sky, it’s not just a call. It’s a warning.” — The Batman

The most informative FanDome segment showed a clip featuring two archaeologists, a male and female, in a hidden tomb or temple, where they find a floating crown. It’s probably in Kuraq (think “Iraq”), where Black Adam lives in DC Comics. The woman reads aloud from an archaic petroglyph, and we understand one word: “Shazam.” Magic lightning strikes, and a man in a hood (it’s Black Adam, natch, played by Dwayne Johnson) appears. He wipes out the archaeologists’ guards.

The woman is likely Adrianna Tomaz (Sarah Shahi), who becomes Isis, and we may have just witnessed her origin, what with the magic lighting and all. Isis, who most people only remember from the ‘70s TV show, has an important part in the Black Adam saga in the comics, which may play out on screen as well.

I made note of Adam’s powers: He demonstrated flight, invulnerability, super-strength, super-speed and magic lightning.

“He’s more brutal, uncompromising. Fueled by the depths of his pain.” — Hodge, about Black Adam

“I’ve never seen the like.” — Brosnan, on the movie’s scale

The weirdness is grandly epic in the mid-Season 3 trailer.

Laura DeMille (Michelle Gomez): “When one expels a parasite, there is only one reasonable response.”

Larry Trainor (Matt Bomer): “Give it a name?” 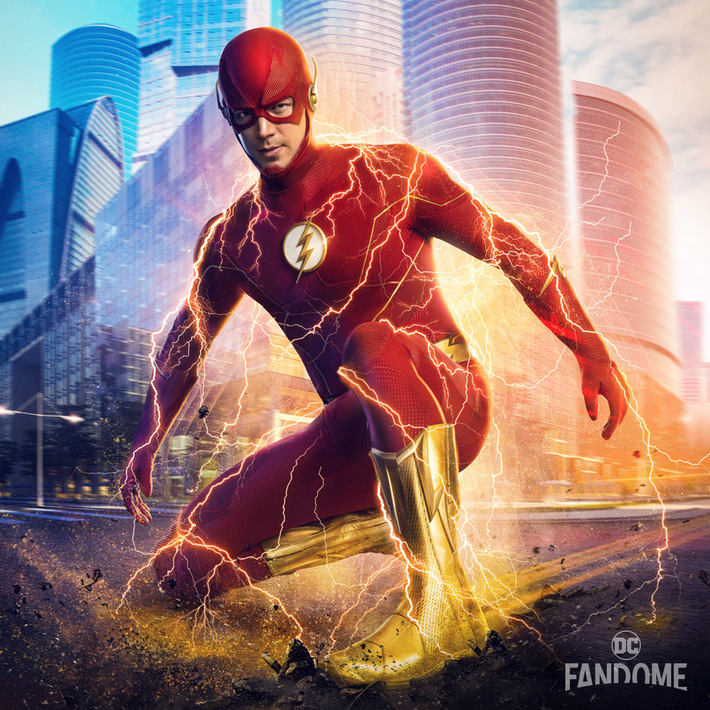 There’s more to talk about than Barry Allen’s new gold boots when it comes to TV’s Flash, but hey, the boots really are pretty spiffy. (Courtesy FanDome)

The news: Television’s Barry Allen/Flash (Grant Gustin) will soon get his most comics-accurate uniform yet, with the addition of yellow boots. Gustin seems almost glum during the announcement, which I attribute to him not talking about the exciting five-part “Armageddon” crossover that launches “Flash” Season 8, and is instead discussing … footwear.

A teaser shows two Flashes (both played by star Ezra Miller), a new Supergirl (Sasha Calle) asking an apparently retired Batman (Michael Keaton) “Are you in?” Presumably they are all from different Earths in the multiverse, which Barry Allen probably screwed up with time-traveling hijinks. Ben Affleck is also confirmed as another Batman, but doesn’t appear in the teaser.

Every time I’m exposed to Injustice, whether video game, comics and now animated movie, I just get very sad.

Favorite line: “I’m pulling the best joke ever. It’ll be my masterpiece” — The Joker (Kevin Pollak), on what he’s done to Superman (Justin Hartley)

Welling, about Cassidy Freeman (Tess Mercer): “Such a mild-mannered person, but when the camera rolled, she was a force. There was a scene where she had to like turn on that Luthor blood in a sense, and I was like ‘Ooh, this girl’s gonna be all right. She’s got it.’”

Rosenbaum: “It was fun killing her in Season 10.”

A Season 2 finale clip features Jennifer-Lynn Hayden/Jade (Ysa Penarejo) battling Eclipso (Nick Tarabay), and Stargirl (Brec Bassinger) being sent to the Shadowlands. Guess who she meets there? (If you’re watching the show, you probably already guessed.)

A clip from the upcoming video game shows playable characters Captain Boomerang, Deadshot, Harley Quinn and King Shark being sent into Metropolis to take down a Justice League brainwashed by Brainiac.

Cast members past and present tell anecdotes about the six-season CW series. I laughed when Chris Wood (Mon-El) describes dislocating his jaw trying to eat nine pancakes. I learned that when Kevin Smith directed an episode, he ordered a bacon truck. I choked up when Katie McGrath (Lena Luthor) says girls write her to say her character inspired them to pursue careers in science.

Best part: All of it.

Bitsie Tulloch (Lois Lane) and Alex Garfin (Jordan Kent) give a tour of the Kent farmhouse. It turns out the staircase doesn’t go anywhere.

Favorite line: “It goes to ‘The Great Beyond!’” — Garfin describing the stairwell 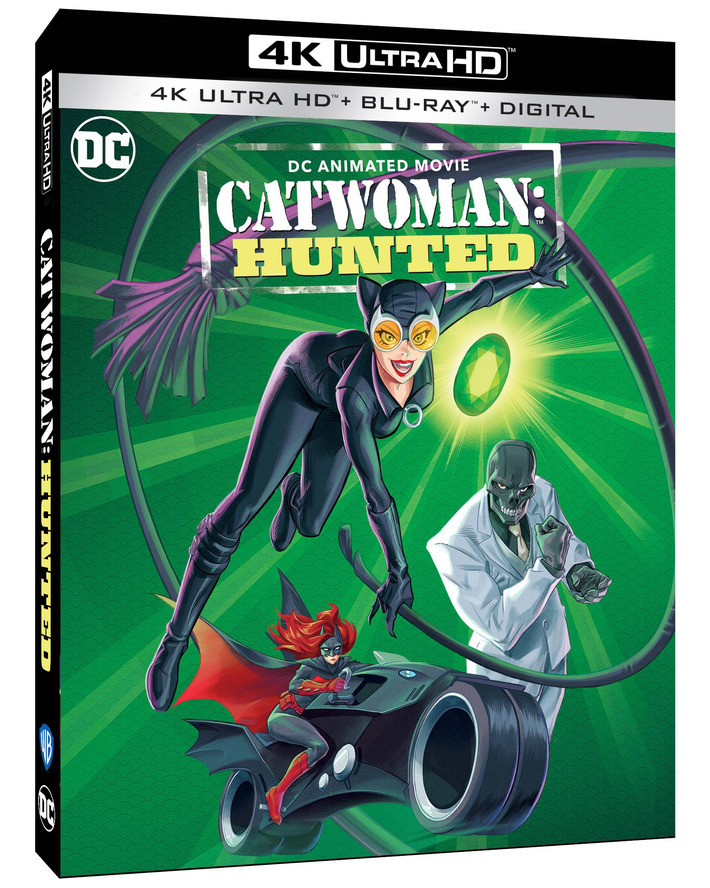 Warner Animated announced its slate for 2022. It begins with Catwoman: Hunted, a new, anime-inspired movie, wherein the Feline Fatale (Elizabeth Gillies) is on the run from just about everybody. Batwoman (Stephanie Beatriz) co-stars.

Catwoman: “A cat always lands on her …”

Batwoman: “Yeah, yeah, lands on her feet. I’ve heard the same. Don’t you ever get tired of that cat schtick?”

Best line: “What’s the one that got away?” — The security question on the Wayne Manor security system. I won’t spoil the answer.

Favorite line: "Wonder Woman 3 is coming. And even if I do know (anything), you’d have to kill me to talk about it.” — Carter

FanDome can be seen in its entirety at dcfandome.com. I’ve aggregated teasers, trailers and clips at the Captain Comics Round Table or they can be found individually on YouTube.