DC Comics skipped the online San Diego Comic-Con this year, and launched one of its own, “DC FanDome.” Part One ran Aug. 22, and boy howdy, they didn’t skimp on the big announcements. Here are the ones that got my fanboy blood racing:

What it’s about: This 2021 movie is set in the Dark Knight’s second year, so thankfully it’s not another origin story. 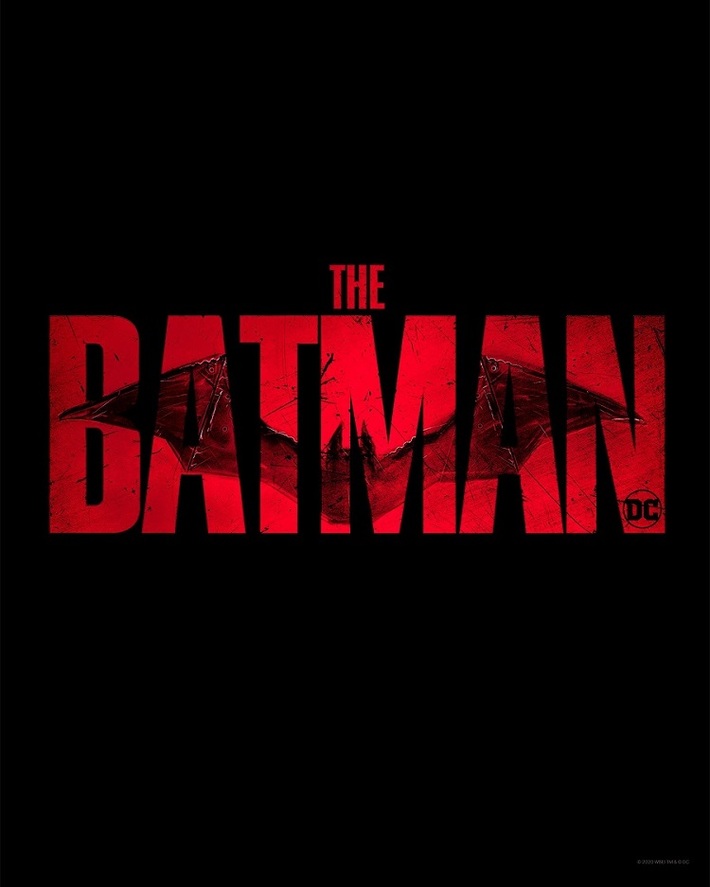 Why I’m excited: The movie promises to be a noir murder thriller which emphasizes Batman’s long-neglected detective skills. And oy, the cast! Robert Pattinson (Twilight) is Bruce Wayne, and Jeffrey Wright (Westworld) is Commissioner Gordon, which is enough. But The Batman also stars Zoë Kravitz as Catwoman and Colin Farrell as Oswald “Penguin” Cobblepot as well!

Finally, Paul  Dano stars as a Riddler more terrifying than any we’ve seen before. Hint: He does not wear a green jacket and derby.

What it’s about: Black Adam began as an original recipe Captain Marvel villain in the 1940s, an Ancient Egyptian who was the first to receive the Shazam powers. However he used them for evil and was exiled for 5,000 years, returning in 1945 to fight his successor, Billy Batson. In recent years, as Captain Marvel has been re-named “Shazam,” Adam’s land of origin has been changed to “Kahndaq” (read: Iraq), a country he has taken over, where he fancies himself a just ruler and attacks any superhero that dares enter. Adam will be played by Dwayne Johnson, who is visually perfect for the role, and the movie arrives in 2021.

Why I’m excited: Adam’s opponents will be the original superhero team, the Justice Society of America.

If you read this column regularly you know I’m a big fan of the JSA. They’ve already appeared on TV in bits and pieces, notably on Smallville, Legends of Tomorrow and, most recently, Stargirl. To see them on the big screen will be a thrill.

Only four JSA members were mentioned. Two are “legacy” characters, Atom-Smasher (godson of the original Atom) and Cyclone (grand-daughter of the original Red Tornado). The other two are Dr. Fate and Hawkman, who are not only originals, but have connections to Ancient Egypt, which is probably no coincidence.

What it’s about: The on-again, off-again Flash movie, starring Ezra Miller (Fantastic  Beasts and Where to Find Them), is on again for 2022. 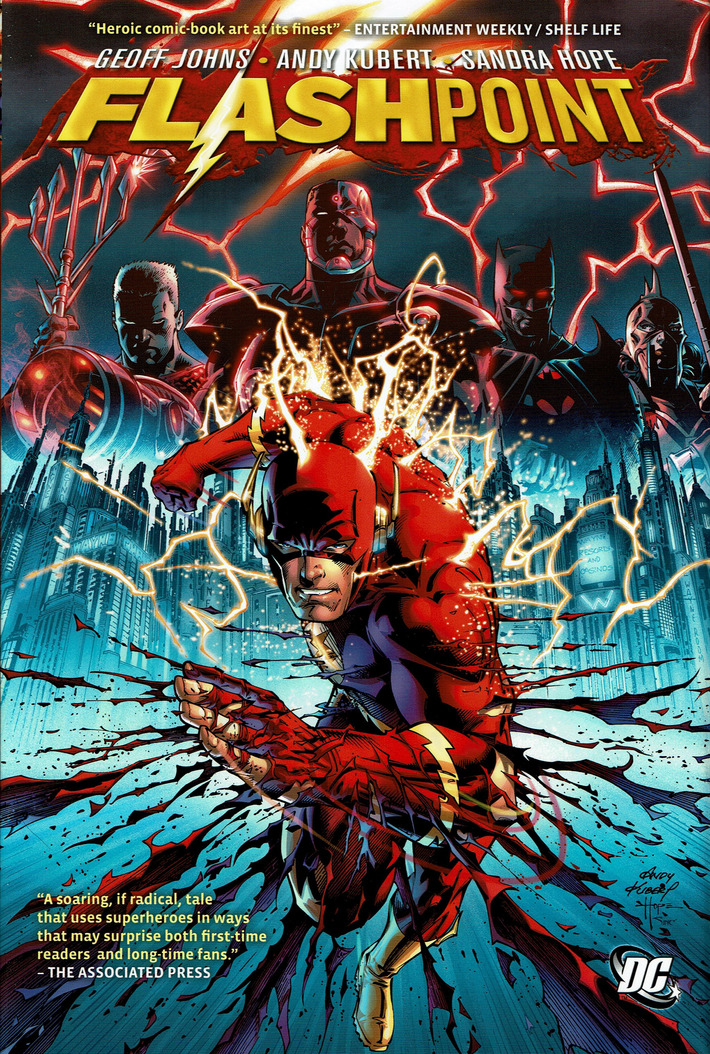 In Flashpoint, a 2011 crossover event, Barry “Flash” Allen altered the timeline by going into the past. Even after he fixed his mistake, the DC Universe was still rebooted as “The New 52.” (Cover art by Andy Kubert, copyright DC Comics)

Why I’m excited: FanDome confirmed that the movie will be based on 2011’s “Flashpoint,” a story where Barry Allen goes back in time to stop Reverse-Flash from killing his mother, which changes history. When he returns to the present, half of Europe is underwater, Thomas Wayne is Batman, Aquaman’s Atlantis and Wonder Woman’s Themyscira are at war and Superman is a helpless government guinea pig.

The Flash probably won’t be that ambitious, but it will introduce the Multiverse to DC’s movies. which explains different versions of the same character (See: The Joker). In this movie alone, we’re promised both the Ben Affleck Batman and the Michael Keaton Batman.

Also: Flash will have a new uniform, replacing that homemade atrocity he wore in Justice League. 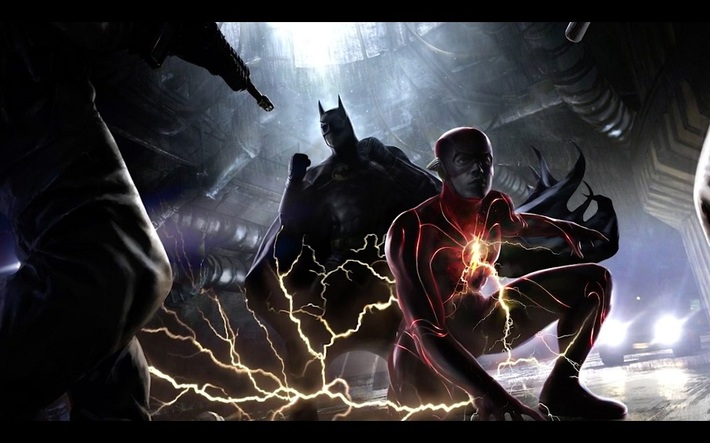 What it’s about: The premise of this 2021 video game  is that Batman and Commissioner Gordon are dead, the Gotham police are hopelessly corrupt and the remaining Bat-people have to step up. It features Batgirl (Barbara Gordon), Nightwing (Dick Grayson, the first Robin), Red Hood (Jason Todd, the second Robin) and, uh, Robin (Tim Drake, the third Robin), each with their own unique fighting style. The Big Bad is the Court of Owls, Gotham’s shadowy oligarchy, but players will face other Bat-foes, like Mr. Freeze (and almost certainly the rest of Batman’s rogues gallery).

Why I’m excited: The game is open-world and Robin has access to the Justice League teleporter, so virtually any DC character could appear, from other superheroes to the fourth Robin, Damian Wayne. Also, Dick Grayson was once brainwashed into being one of the Talons, the Court’s enforcers, which could be introduced to complicate play.

What it’s about: Milestone is a line of titles featuring super-people of color, including the Blood Syndicate, Icon and Static. DC is planning to re-launch the line in February 2021.

Why I’m excited: It’s been too long since we’ve heard from Virgil Hawkins and the rest, and I’d love to see them in print again. One caveat: DC just fired much of its staff, DC Universe is about to be canned and the DC merchandise arm is already gone. Is this expansion really happening? 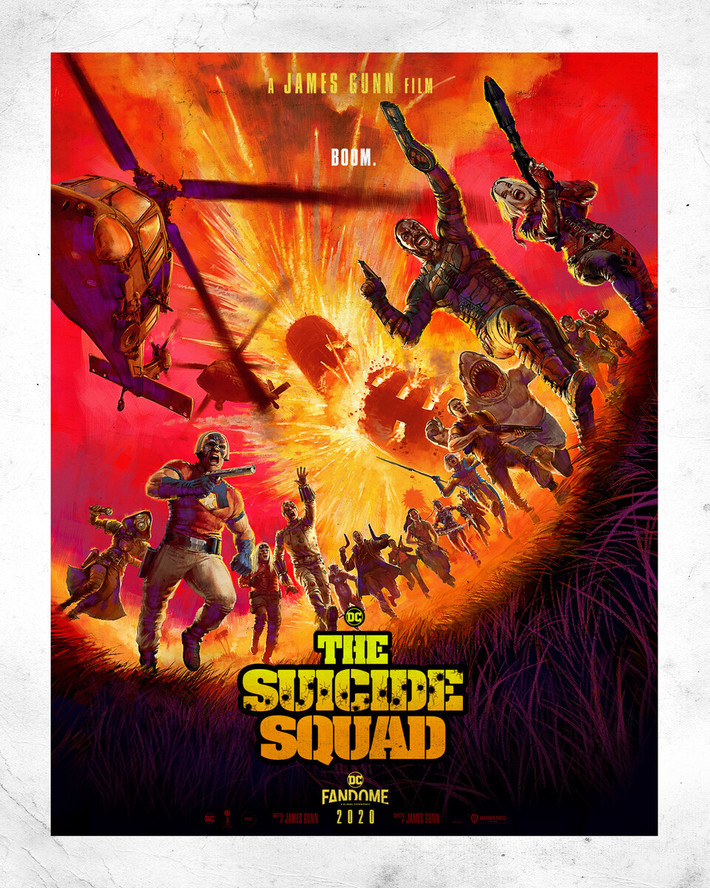 What it’s about:  This sequel-cum-reboot returns Amanda Waller (Viola Davis), Rick Flag (Joel Kinnaman), Captain Boomerang (Jai Courtney) and Harley Quinn (Margot Robbie) for a 2021 premiere. But it also introduces a grab-bag of C- and D-list characters that is utterly bizarre. They include, for example, Javelin (Flula Borg), an Olympic athlete who decided to commit crimes with a javelin, and fought Green Lantern. (It worked out about as well as you expect).  The rest of the team consists of utterly forgettable characters such as Blackguard, Bloodsport, Mongal (Mongul’s daughter), Peacemaker, Polka-Dot Man (you heard me right), Ratcatcher 2, Savant, T.D.K. (a surprise I won’t spoil here), Thinker and Weasel.

Harley Quinn (Margot Robbie), the breakout star of Suicide Squad, is one of the few characters returning to the sequel, The Suicide Squad. (© 2016 Warner Bros. Entertainment Inc.)

Why I’m excited: Peacemaker (John Cena) is one of the characters that DC bought from Charlton Comics years ago, and hasn’t used much. He was the inspiration for “Watchmen’s” Comedian, and his tagline is “a man who loves peace so much he’s willing to fight for it!” Obviously, he is not well. 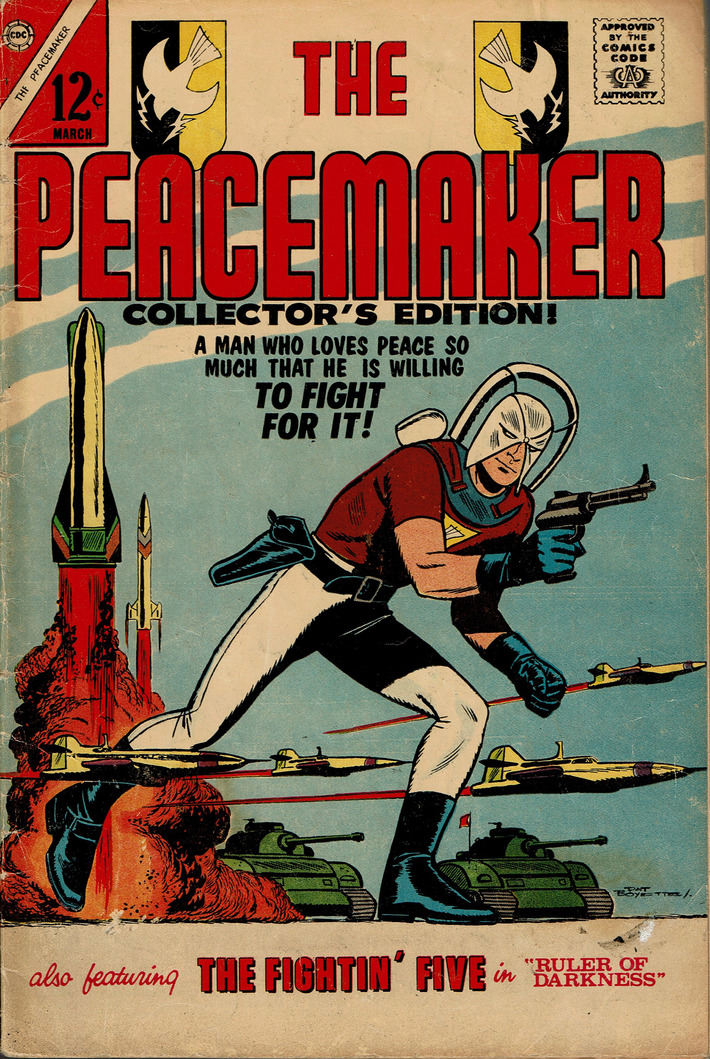 Appearing in The Suicide Squad is Peacemaker (Paul Cena), an obscure character who first appeared in Charlton Comics in 1967. (Art by Pat Boyette, copyright Charlton Comics)

“Within each of our characters there’s a certain beauty,” Gunn said. “Within most of them. Some of them are just pretty crappy through and through.”

What it’s about: Currently scheduled for Oct. 2, 2020 (cross your fingers), the second Amazing Amazon movie returns director Patty Jenkins and star Gal Gadot in a battle with one of Wonder Woman’s most persistent foes, The Cheetah (Kristin Wiig). Also, Steve Trevor (Chris Pine), who died in the first movie, mysteriously returns.

Why I’m excited: We finally get to see Wiig in her fully feline form, and thankfully it does not bring to mind Cats. Chris Pine wears parachute pants (badly). Also, the trailer appears to show Wonder Woman racing across the sky by catching lightning with her magic lasso. Whatever’s going on there, I want to see it!

What it’s about: WarnerMedia threw a ton of money at Zack Snyder to re-shoot and re-cut the Justice League movie. It’s supposed to air on HBO Max in 2021 in four one-hour parts, then as one four-hour event.

Why I’m excited: One word: Darkseid.

There was plenty more, including presentations about Aquaman 2, The Flash TV show, Shazam 2: Fury of the Gods, the Suicide Squad: Kill the Justice League video game, Titans and more. And it’s not over: DC FanDome Part II arrives Sept. 12, focusing on fans. Even so, there will be more panels, and more announcements.

What we need now is for The Flash to travel forward in time, and bring back the news. Come on, Barry, would it really destroy the timeline that much?

(All videos released as part of FanDome are available in the Videos section.)

I hear you. But DC Comics just fired 1/3 of its staff, so it's not like they have a lot to talk about. I'm still wondering if the Milestone announcement is for real, or will just end up being a Static revival.