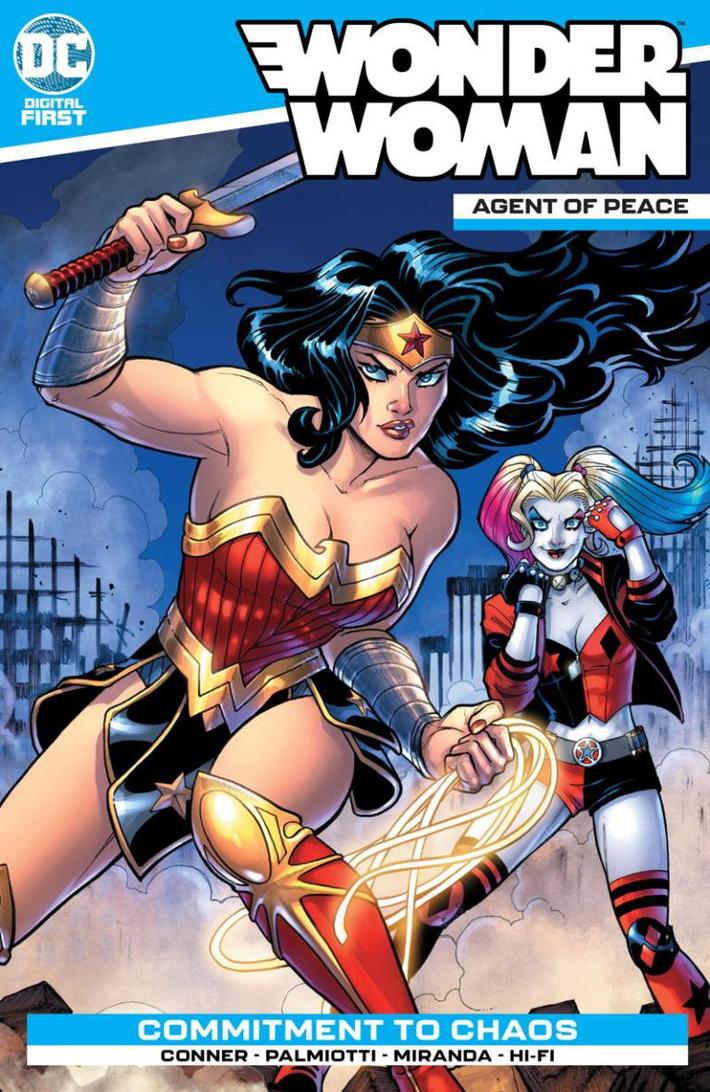 Looks like these are continuing! Here's what I can find that's coming up:

Wonder Woman: Agent of Peace 14: Oct. 27 (or thereabouts: got this one from DC's site, which puts everything on Tuesdays)

Does anyone know if Batman: The Adventure Continues (based on the animated series) plans to continue past the recently released issue 14?

It takes 2 digital issues to make 1 print, which DC solicited issue 7 as its last although I bought the digital version at 99 cents each and saved myself some money versus $3.99 per print issue.

In any event, both formats end with the conclusion of the Jason Todd Returns story (sorry, no spoilers) but I would love to see Bruce Timm, Allan Burnett, and Ty Templeton produce more in this continuity.

And Rob, et al: FYI—Amazon is advertising a 20th issue for both Superman: Man of Tomorrow and Batman: Gotham Knights.

I think there's more Batman: The Adventures Continue comics on the way, Lee. It might be a little while before we get them, but with the way issue 14 ended, it looks like they're setting up a sequel. Harley Quinn: Black White and Red wrapped up too, in September.

Interestingly enough, the Superman and Batman digital comics seem to be alternating weeks, but the Wonder Woman digital title is coming out weekly. Maybe they're fast-tracking her to have another trade on the stands when the movie comes out? In any event, I'm happy to see more Wonder Woman stories being made.

DCeased: Hope at World's End wraps up with issue 15; #14 came out this week. I'm not sure when Injustice: Year Zero concludes, but it looks like it's got a little further to go.

There's a new book, Truth and Justice, that's scheduled for January. The first storyline is a teamup between Vixen, Dr. Mist, and Impala. The digital issues will appear first, with a print follow-up in February.

Batman: The Adventures Continue resumes  with issue 15 on Dec. 17 with a Harley & Ivy Christmas story! Subsequent issues look weekly, but issue 16 is currently scheduled for the next day, Dec. 18; I'm betting that's an input error.

Also weekly is the new Challenge of the Super Sons, starring Robin and Superboy, set before Jon aged up. It's written by Peter Tomasi, and drawn (so far, anyway) by Max Raynor.

The Superman, Batman, and Wonder Woman digital first titles are still ongoing, with Wonder Woman being weekly while Superman and Batman alternate weeks.

Thanks for the heads up on B:TAC Rob!

All the other main hero titles started out reprinting the new material from the 100 page giants—a format I seriously miss—but Shazam's "series" only lasted 2 issues, to date. Wonder what's up with that?

I still think DC might have been planning something for the good Captain before the change but if I'm right, then does that leave a 16 page story unaccounted for? Issue 1 was a 16 page story with issue 2 a pair of eight page tales when each giant issue featured a 16 page lead and a 8 page back up.

Would love to have seen at least From Beyond the Unknown and World's Finest with Supergirl and Batwoman graduate to regular series too.

Noticed Flash, Aquaman, DC Superhero Girls, Titans and Swamp Thing haven't had an issue since they used up their 100 page giant material.

Good eye, Lee! That does leave a 16-page Shazam story unaccounted for! That is, assuming it was completed before the Walmart Giants hit the skids.

And that's my impression, too. I can't remember who said it, but I remember someone on a podcast mentioning both a new Shazam Giant and also one for Harley Quinn, I think. But somewhere along the line, that went kablooie.

Of the stories that are still getting published through Comixology, I'm enjoying most of the ones I've read. I tend to not buy them all, but if I see either a creator I like, and art style that I find appealing, or a premise that grabs me, I'll give it a shot.

This first issue of Challenge is pretty good, but it's mostly character work and setup. Next issue the kids start traveling through time and space -- with their first stop being a teamup with the Flash! From the synopses of the upcoming books, the comic looks pretty episodic that way -- a new time, and new teamup. Should be fun!

Batman: The Adventures Continue 15 and 16 being released within 24 hours of each other is NOT a mistake because they complete a two part Christmas adventure! Personally, I doubt they'll be collected in print before NEXT December.

I liked the first installment of Challenge too, but maybe the other Shazam story has yet to be made public because it starts an unfinished serial?

Thanks, Lee! And good point about that Shazam story! It certainly might have.

Okay folks! Hopefully everyone is having a Merry Christmas.

There are further holiday hijinks in store for Batman: The Adventures Continue.

Issues 15 and 16 were released within 24 hours of each other as a 2 part Christmas adventure, but now 17 and 18 will be released soon to conclude the tale starting on New Year's Eve.

The Ventriloquist is (allegedly) cured but the Joker—after not being invited to Harley and Ivy's Christmas party, among other things—wants to reunite him with "The Boss" for {SPOILERS!}.

Kindle is apparently having a Marvel Masterworks sale!

At least as of Christmas Eve—for certain titles—the first volume is 99 cents, with subsequent volumes $1.99 until you approach a certain point in the release history, usually somewhere in the 1980s of the original issues.

I picked up the collected Killraven (the entire Amazing Adventures run plus the graphic novel), the very first Black Panther volume (all the Jungle Action stories when he was in that anthology) and the very first volume of the Silver Surfer (his original, super sized issues 1-6 from the late 1960s plus a couple of bonus tales). All for $2.97, plus tax.

Whatever you may read, or however you plan to spend this holiday weekend, take care and stay safe!

Just dropping in to note that it looks like the revived Superman, Batman, and Wonder Woman "Digital First" titles have stopped again. For good, or just for now? Who knows. But Superman: Man of Tomorrow and Batman: Gotham Nights last published an issue in November. Wonder Woman: Agent of Peace continued through December, and has now been replaced with Sensational Wonder Woman, a weekly title with the horizontal formatting, like most of DC's digital output.

Truth and Justice also just debuted, with a Vixen story. Again, weekly; it looks like the first 3 issues focus n Vixen, and the next one is a Superman story. From there, who knows?

Plus, there's still Challenge of the Super Sons, and  Batman: The Adventures Continue (although it looks like the recent Christmas story is all they've got for now, I'd expect more soon.)

Actually, now that I've read Truth & Justice 1, it looks like it was originally drawn for full-page layouts, and then broken up -- sometimes awkwardly -- for horizontal digital presentation. It's a fun story so far, though, a team-up in Africa between Vixen, Dr. Mist, and Impala. Nothing earth-shattering by any means -- possessed artifact, yadda yadda -- but fun to see these characters interact, and a plausible reason why Vixen is the hero best equipped to handle the threat, rather than calling in the full JLA.

Mine was fine Rob. Hope yours and everyone else's was too.

I am man enough to admit when I was wrong. For some reason(s) there has yet to be an issue 18 of Batman: The Adventures Continues and the holiday adventure concluded with 17. Guess whenever this tale sees print, it will be longer than an average issue but less than an annual or special.

Am enjoying Challenge of the Super Sons, but wondering if the story might be presented out of order, considering events of issues 1, 4, and 5 (to date) compared to issues 2 and 3.

Haven't seen any Amazon Kindle listings for Truth and Justice or Sensational Wonder Woman yet, but Harley Quinn: Black, White, and Red seems to still be going strong along with a couple of titles I have no personal interest in: Injustice: Year Zero and DCeased: Hope At World's End.

On a side note, I was surprised that it spanned six Masterworks volumes, but during the Christmas sale I also acquired Steve Englehart's entire Avengers run and bought the other Silver Surfer volume to complete that series. All  $1.99 each.