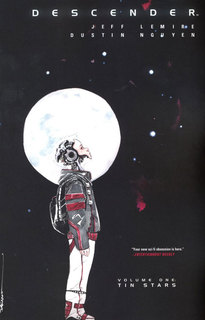 A young android named Tim-21 is the unlikely hero of this science fiction tale. He returns to consciousness ten years after a catastrophic attack by giant robots called Harvesters has nearly obliterated the human race. Before he can begin to process what has happened he finds himself on the run from a disreputable looking group of Scrappers, who have picked up his signal when he reactivated and connected to the Net. At the same time a group from what is left of the United Galactic Council is coming to collect him, because his android matrix has been identified as the same one the Harvesters operate under.

Things are looking up until the UGC group--headed back to the home world with Tim and two other androids--gets intercepted by a warship from the planet Gnish, leaders of the anti-robot, anti-technology movement that sprang up after the Harvester attack. It's just one problem after another. In the course of telling the main story Lemire and Nguyen fill in both history and background on current politics, so after a bit of initial confusion I was able to easily follow the narrative thread.

Nguyen's painted art is beautiful, and provides a real old-school Vertigo vibe to the project. For me it strongly recalls Jon J Muth's work on Moonshadow and other 1990s comics. There's an "Atlas of the Core Planets of the United Galactic Council" included in the back of the collection. Several of the nine planets have not even been mentioned yet, let alone visited: several interesting locations for future action.