Did the Avengers v1 really end with issue 202?

It might be a bit presumptive of me to 'start' a discussion on only my first full day as a member here...but.... here goes...

Avengers 202 saw the end of Perez style 'clean' art and the beginning of a dull period before the big shake-ups of 211 and in my mind was never the same again....anyone any thoughts? 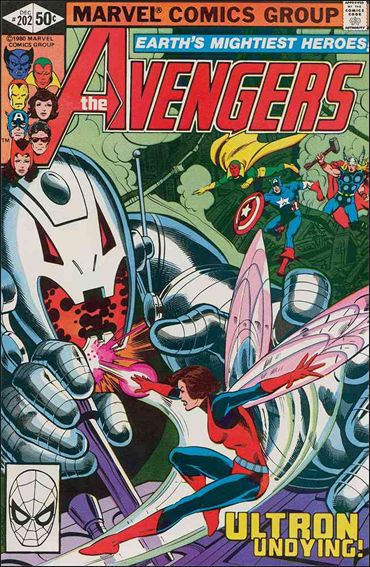 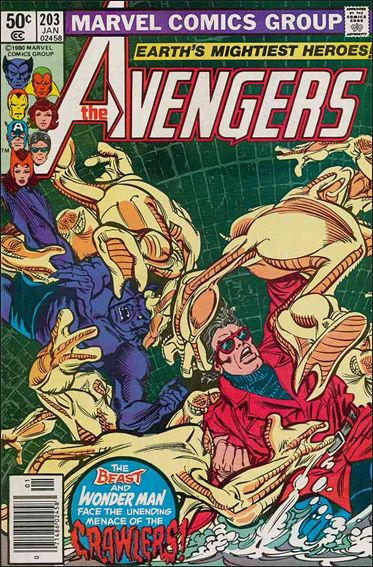 Wow! That's quite a demarcation point you picked there!  As a kid I loved the Avengers and got as many as I could from issue 165, which, as one of the first superhero stories I read, and certainly the first Avengers story I read, blew my little socks off.  I got the stories partly in US monthlies, and partly in UK reprints. I kinda grew out of Marvel comics (DC were v difficult to get anyway) at about 12 years old.  Perhaps I could sense that there wasn't real forward development in the stories, just the illusion of change.

In any case, the issue I stopped getting the series was #201.  Somehow everything after that just didn't strike me as 'my' Avengers.  I guess the artists changed. After Byrne in his prime and Perez anyone else seemed a come-down.  Also the team changed shortly after that. The Monica Cap Marvel and a Black Knight who was anything other than a statue just didn't mean anytihng to me.

Exactly my point. 202 finished off the Ultron tale of 201 (the part that wasn't a Jarvis solo tale!) which even seemed a bit dull and 'done-before' and I just can't remember anything else about the Avengers issues until the 211 shake-up - (other than some villains called 'the Weathermen'??) and that shake up cleared all my favourite heroes and brought in the first 'never-worthy-of-the-name-Avengers' in Tigra and I longed for the glory years prior to 202...!

It wasn't even George Perez in his prime.  Dan Green had been MURDERING the art (which isn't easy to do with Perez) for so many issues, then they were jumping around with Gene Day, Mike Esposito...  and then there were those utterly, out-of-left-field, off-the-wall Carmine Infantino fill-ins (#178, 197, 203).  Not to mention the huge number of issues by other fill-in artists (including Dave Wenzel, Don Newton, Arvell Jones, Alan Kupperberg... and of course rotating writers as well at one point...   I suppose in his arrogance Jim Shooter felt the book needed a firmer hand, but HE didn't stick around long either, once he'd totally screwed over some of the characters.

Things didn't finally settle until Roger Stern came onboard, over 2 years after Perez left.  That's a long time for such an "important" book to be drifting without a rudder.

Avengers #202 was the end of an amazing run where it was one of the best comics around. It began with Steve Englehart in #109 and he greatly added concepts, themes and characters that made The Avengers a must-read for much of the 70s.

It improved with Al Milgrom as editor then the Stern/Buscema/Palmer era brought it back to prominence!

Ah, Philip, that sets me up to ask what was wrong about those issues pre #109?. Personally, I loved the stuff from and including #101 (Leonard Tippet!?) then the Sentinels stuff and one of my favourite runs in the Grim Reaper- Space Phantom Capatin America and Rick Jones as Captain Marvel tales too!. Credit to Englehart but - surely you can't count those issues out?

Of course not, those were good comics but Englehart raised The Avengers to a higher level with epic stories and raw emotions: The Avengers/Defenders War, Mantis, the Vision and the Scarlet Witch, ZODIAC, the Celestial Madonna, the Vision's origin, the Legion of the Unliving, the Marriages, Kang War, the Beast, the Cowboys, the Squadron Supreme, Nelson Rockefeller and the Hellcat! All in, like 45 issues!

True - and I read a/your thread recently (?) about the Zodiac
issues - but I really didn't rate them - and at the time I absolutly hated Mantis! I remember a stupified look on Thor's face when she kissed him once - and it annoyed me that she was NOT an Avenger for all those issues - including the Avengers/Defenders War issues - just a guest!

...but my starting point here was - however poor any of the issues were before 202 - anything that came afterwards just was not of the same caliber - and that 'feeling' of those first 202 issues never quite felt the same again. AND - Anyone who joined the team after that point - never felt like a 'proper' member...?

Hey, Richard; you have full rights to start a discussion, first day or no.

Permalink Reply by Richard Mantle on June 24, 2013 at 4:10am
Thankyou. Everyone has been great. I feel tailor made here literally thousands of comics, hundreds of trades......and an opinion about every one!!!

#203-210 was a lull, no doubt, but I can’t see it as the end of an era. I had a bit of a problem with Tigra as an Avenger, too, until Shooter explained his reason for including her in the first place (to illustrate that not every hero is Avengers material). I was also reluctant to accept Captain Marvel and Starfox at first, but there’s no way I don’t consider the Stern/Buscema issues (#255-300) to be among the best of the decade.

The series had fewer highlights for me after that, and I found the while “Crossing/Timeslide/Heroes Reborn” era truly execrable, but I don’t consider even that to be the point at which the Avengers were “never the same again.” (That would discount the Busiek/Perez run, which trumps even Perez’s original run IMO.) That’s not to say I don’t have such a point. Although I believe Busiek’s run began to peter out somewhat toward the end, I would draw my demarcation point at V2 #57 (or V1 #472, if you prefer), the first post-Busiek issue.

That’s the point at which, for me, Avengers began it’s long slow slide to “unreadable.”

My Avengers ended there.

Peter Wrexham replied to Steve W's discussion A Cover a Day
"I think a Carnivale is similar enough to a Carnival that it should count."
7 minutes ago

Jeff of Earth-J replied to Jeff of Earth-J's discussion Ultraman Tiga
"TO THE SHINING ONES: "Tiga is defeated! As people mourn, GUTS executes a plan to save TIga who…"
2 hours ago

The Baron replied to The Baron's discussion Ultraman Manga, by Eiichi Shimizu & Tomohiro Shimoguchi (Mildy Spoiler-ish)
"Volume Sixteen After freeing Shin, Shinjiro and Dan, Edo tells them that Mefilas has been lying…"
4 hours ago

The Baron replied to Jeff of Earth-J's discussion Dark Shadows
"Ed Sullivan:  "Was it a very big shoe?""
5 hours ago

Jeff of Earth-J replied to Jeff of Earth-J's discussion Dark Shadows
"We watched 625 last night, the episode with the "wedding-that-wasn't." I know it…"
5 hours ago

JD DeLuzio replied to Steve W's discussion A Cover a Day
"We've had a number of reposts recently... Could it be we've been partying a little too…"
9 hours ago

Richard Willis replied to Captain Comics's discussion Archie in November 2022: Wouldja believe: Bob Phantom?
"This cover needs to be on the side of a building."
11 hours ago