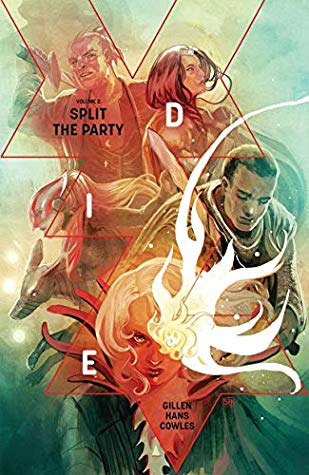 The second installment finds the group still stuck in the DIE world. As the title says, they have split up: this is never recommended in game play, so it's not a good sign. But their biggest problem is more fundamental. No one can escape DIE until everyone living agrees to go home, and the group is far from being in agreement about that.

The story reveals more and more about how this world works, as well as previously unknown character backgrounds. Before now there have been many references to classic fantasy literature, including an entire issue focused on Tolkien. The geek quotient goes way up here with references to the childhood shared fantasy world of the Brontë children (which Gillen admits to only discovering himself during his research for this series). It's not an incidental thing, either. The place names in the imaginary world turn up in DIE, and Brontës appear as characters.

I was provisionally on board with the series after the first volume. But despite the strong characterization and beautiful art, I think the story has moved past my ability to relate to it. Gillen has been developing a DIE role playing game to accompany the series, which shows real commitment, but is of no interest to me (as a non-gamer). The collection also includes variant covers, as well as the essays Gillen wrote for the individual issues.