Reports are starting to hit that Disney will pay George Lucas, the 100% owner of Lucasfilm, a bit more that $ 4 billion in cash and stock for the company and properties.  I knew this would happen eventually given the investments Disney has made in Star Wars and Indiana Jones attractions/merchandise at their parks, but I thought it would happen after George died.

Disney will now own Marvel, the Muppets, Star Wars, and Indiana Jones...in other words, my entire childhood.  It's nice that I have Disney stock so I can hold on to a bit of it.

In other news, Jack Kirby and Jim Henson will be haunting the hell out of George tomorrow night.

From the press release:

Kathleen Kennedy, current Co-Chairman of Lucasfilm, will become President of Lucasfilm, reporting to Walt Disney Studios Chairman Alan Horn. Additionally she will serve as the brand manager for Star Wars, working directly with Disney's global lines of business to build, further integrate, and maximize the value of this global franchise. Ms. Kennedy will serve as executive producer on new Star Wars feature films, with George Lucas serving as creative consultant. Star Wars Episode 7 is targeted for release in 2015, with more feature films expected to continue the Star Wars saga and grow the franchise well into the future.

I cannot comprehend why anyone would, under any circumstances, want to sell-- and therefore relinquish CONTROL-- of a company they built themselves. (But that's me.)

So, Disney will own the totality of the Star Wars properties?

If I were Dark Horse Comics, I'd start making contingency plans.

I'm OK with an Episode VII as long as Lucas is nowhere near the director's chair or producer's office.

Who's the leader of our club,
We really think is best....

Hey there Hi there Ho There
It's the cash, we must confess.....

I called Disney's Star Wars a couple of years ago! There's already a princess with no mother!

OK, here's a question: What independent entertainment franchises are next to by acquired by Disney, Warner or some other big conglomeration?

My picks for new "Star Wars" film directors: Luc Besson (The Fifth Element) or Kerry Conran (Sky Captain and the World of Tomorrow). What say you?

The producers office is actually the right place for Lucas.  He's a pretty good idea guy.  But, even on his best films, he had someone else scriptwriting or directing.  The prequels had some great things in them- amazing visuals, spectacular fight scenes- but could have used a director who knew what it took to work with actual human actors.

"I'm OK with an Episode VII as long as Lucas is nowhere near the director's chair or producer's office."

Or writing the screenplay. As Harrison Ford famously said of Lucas' dialogue: "Maybe you can write this s---, but you sure can't say it."

So, what would you do with 4 billion dollars?

Make my own Star Wars movie, and use the rest to battle the lawyers

So, what would you do with 4 billion dollars? 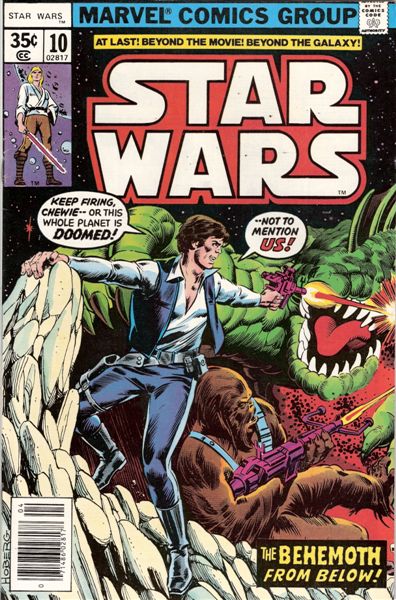 This comic series, funny enough, was the one that moved me from reading primarily Disney comics to Marvel ones.

Maybe Disney will bring back Jaxxon the Green Rabbit-Man? He can't be worse than Jar Jar Binks, meesa thinks!

Fred W. Hill replied to Jeff of Earth-J's discussion The Greatest Comic Book of All Time
"I can't really say what I'd regard at the greatest comic ever, but just going from my…"
1 hour ago

Jeff of Earth-J replied to Jeff of Earth-J's discussion The Pre-Defenders
""Funny that the editor & writer of that Tales to Astonish story, and also happened to have…"
1 hour ago

doc photo replied to Jeff of Earth-J's discussion Tales to Astonish
"The stories covered above make up my favorite Hulk run of all especially the Ditko material. We…"
1 hour ago

Lee Houston, Junior replied to Steve W's discussion A Cover a Day
"Like I said in my previous post: ALWAYS read the fine print! (Image courtesy of the Grand Comics…"
1 hour ago

Fred W. Hill replied to Jeff of Earth-J's discussion The Pre-Defenders
"Funny that the editor & writer of that Tales to Astonish story, and also happened to have been…"
2 hours ago

Jeff of Earth-J replied to Jeff of Earth-J's discussion Tales to Astonish
"As I have mentioned, my first two "Hulk" comics were Incredible Hulk #167…"
2 hours ago

Captain Comics replied to Captain Comics's discussion Bond #4: 'Diamonds Are Forever'
"I liked (Never Say Never Again), but consider it separate from the other Connery Bonds. It's a…"
2 hours ago