Doctor Who Reactions: “The Underwater Menace”

“The Underwater Menace” is 50% missing; only the second and third episodes of a four-parter exists in the BBC archives. (See link in fourth response below for more details.) Episode three is available on the “Lost in Time” DVD set, but I’ve watched it only once. (I have the paperback, too, but haven’t read it.) I’ve watched some of the Second Doctor stories from “Lost in Time” more than once, but not “The Underwater Menance” because it’s easier to get into the first episode of a mostly-missing story (“the Faceless Ones,” “The Web of Fear”) than it is a middle chapter (“The Evil of the Daleks,” “The Abominable Snowmen”).

From what I understand, “The Underwater Menace” is not particularly well-regarded by fans of the show. I remember being impressed by the one episode I did see (only once, a few years ago, remember), but perhaps I was more impressed by its ambition than its execution. Doctor Who has a long reputation of its writers overestimating its budget, and “The Underwater Menace” is probably an example of that. In terms of the show’s ability to realize alien races on the small screen in the early years, I’d say the Fish People fall somewhere between the Zarbi (at the bottom end of the scale) and the Cybermen (at the top). I actually prefer the look of the Fish People to that of the Silurians.

The story itself comes across very well on audio, leading me to believe the story’s general low estimation is based more on the costumes and sets rather than the acting, script or plot. Imagine what this same story would look like using CGI and today’s special effects. (Again, think of the Silurians.) I have one episode left to listen to and I do plan to re-watch the video version of episode three tonight, so I may have more to add later.

Maybe this story would be a good candidate for the cartoon reconstruction.

Considering what a good job they did with “The Invasion,” I think all of the missing episodes are good candidates for cartoon reconstruction! Perhaps they could start with the ones such as “The Tenth Planet” which are missing a single episode, and save the more labor intensive ones such as “Fury from the Deep” (missing all six of six episodes) for last. You reminded me of something else I wanted to say about the audio version of “The Underwater Menace,” though, and that is, for the linking narration, they “cheat” a little bit, describing the scene as envisioned by the writer, not necessarily as it would have appeared on screen.

Isn't this one of the stories where they just found another episode a week or so ago?

As a matter of fact it is, now that you mention it. Video copies of episode 3 of "Galaxy 4" and episode 2 of "The Underwater Menace" have recently turned up. (In the interest of full disclosure, Bob pointed this out to me last week but I had forgotten one of the episodes was from this story.) I've edited my initial post to reflect this recent discovery. Thanks!

I watched episode three last night and listened to episode four this morning. Perhaps the costumes of the Fish People aren’t quite as impressive as I was remembering them (I do like the masks, though), but I remain impressed by this story’s ambition. Some fans, I think, are critical of the underwater scenes, but I find them unique and daring… perhaps a little cheesy in execution, but c’mon! they were taking a risk in an effort to present something truly different.

I have heard that Anne Chaplet (from the “The Massacre of St. Bartholomew’s Eve”) was at one time considered as a possible ongoing companion, but was replaced at the last minute by Dodo, her possible descendant, because the thought at the time was that the Doctor and other companions would have to spend too much explaining things too her. That makes me wonder why they decided to make Jaime, an 18th century Highlander, a companion. Throughout “The Underwater Menace” the Doctor, Ben and Polly are continually explaining things such as radiation and who Robert Burns was to Jamie.

I think Jamie must be either very bright or very dull. By the time I first saw him (episode one of “The Faceless Ones” on the “Lost in Time” collection), I assumed he was a modern day Scottish youth (well, except for not recognizing an airplane, come to think about it). In any case, he soon passed beyond questioning everything he encountered, whether because he was bright enough to assimilate quickly or dull enough not to become nonplussed I don’t know, but I’m willing to give him the benefit of the doubt.

Cliffhanger: “I’m very sorry everybody, but I’m afraid the TARDIS is out of control!”

With regard to Jamie: that was a different production team, but I can't confirm the Anne Chaplet story is correct.

I always thought of Jamie of being sort of like an "ancestor" of Leela - the "Primitive" whom the Doctor educates over the course of his travels.  For example, I'm reasonably certain that I recall that he started out illiterate, but was later seen to read.

It tends to crack me up that Leela speaks better English than most characters The Doctor runs into. She may be proud of being a savage, but under that, she's still a lady.

Watched Episode Three of this last night.  I found it to be amusing, on account if being extremely goofy. And remember:

"Nothing in the world can stop me now!"

This was finally released on DVD, I picked up my copy yesterday. Episodes 2 and 3 currently exist, episodes 1 and 4 are represented by a combination of the soundtrack and still photos fro the episodes. A shame, but they seem to have given up on animating the missing episodes.

1)This is Jamie's first story as a companion - it's interesting how quickly he adjusts to the idea of time travel.

2)We also see that the Eleventh Doctor was not the firs tone to have a penchant for funny hats.

5)Cliffhanger:  Polly's about to be fishified!

1)What's with the comedy eyebrows on Damon?

2)"Just one small question: Why do you want to blow up the world?"  Why not?

3)We see Troughton doing a lot of dress-up in this. I gather the word came down from on high for him to knock it off.

5)Cliffhanger: Thous rats the Doctor and Ramo out to Zaroff!

1)The Atlantean costumes are as goofy as all get-out. I feel particularly bad for the actor playing Lolem.

2)The Doctor's "gypsy" outfit reminds me of something... 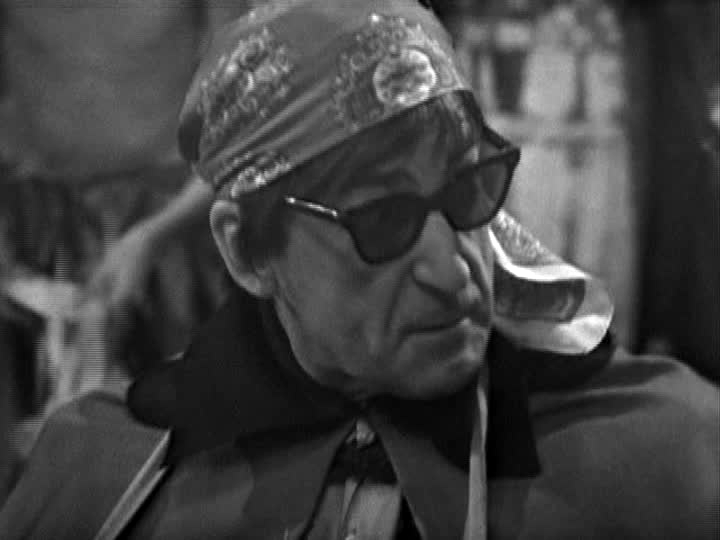 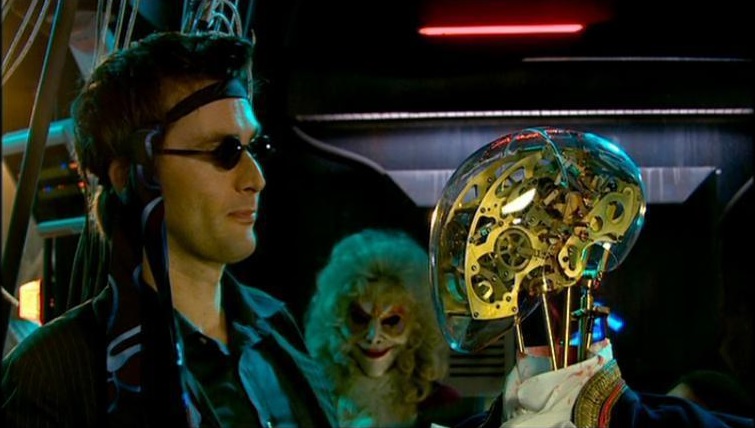 3)The Fish People are lame.

4)Jamie sees through Zaroff's "attack" and he still gets away with it!

5)The "bang" from Zaroff's gun is a little too obviously an off-stage sound effect.

6)Cliffhanger:  "Nothing in the world can stop me now!" I've realized who Zaroff reminds me of... 3)The Comedy Irishman gets a bit wearing after a while.

4)Cliffhanger: "I'm afraid the TARDIS is out of control!"

Overall:  I'm glad I finally got to see this, but it's really kind of lame. I gather Troughton was really angry when he saw the script. He was new to the part, and felt that the last thing he needed was for any of his early stories to be really bad.  Apparently, he also loathed the director as well.

I had my calendar marked that it would be available tomorrow. I'll have to swing by B&N tonight.

I've noticed you sometimes find things at B&N before their official release date.