Dutch cartoonist blinds us with science

If you read last year’s Philosophy: A Discovery in Comics, then you already know who Dutch cartoonist Margreet de Heer is. If not, you’re in for a treat.

Philosophy explored the history and status of that field via comics, with our guides being cartoon avatars of Margreet herself, and her husband and partner Yiri. Anyone who has ever taken a philosophy course knows what a minefield that particular discipline can be, yet Margreet and Yiri made it accessible, easily digested and – dare I say it? – fun. 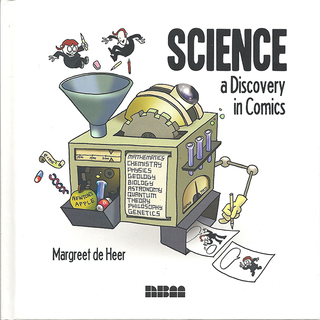 Now Margreet and Yiri have tackled another difficult subject, with equal success. Science: A Discovery in Comics (NBM, $19.99) knocks that gigantic topic down to size, allowing easy understanding of even the most complicated of subjects. And not content with just the facts, Margreet tackles some subjective topics, like the often abrasive relationship between science and religion.

My first thought when reading both Philosophy and Science was how similar the sensibility was between those works and Larry Gonick’s long-running “Cartoon History” series. But in an e-mail interview with de Heer, she acknowledged that she’d heard the comparison before – and feels “honored” – but had never actually seen Gonick’s work.

So where did all this fun come from? I asked de Heer that question and others, which she answered in such a thoughtful and complete manner that I can’t really improve on what she said. So here’s a plain, old-fashioned Q&A, starring Margreet de Heer:

Q:  How would you describe your art style? It's playful and fun, and suggestive of the Franco-Belgian school, but I don't see many influences. Maybe a little Herge in there?

“Funny you say that, because Tintin [by Herge] was actually my first crush and imaginary boyfriend, when I was five years old. But no, I am not consciously aiming for the Clear Line [style]. One comic style I have made a conscious effort to imitate is that of ‘Calvin & Hobbes.’ And there's the loose whimsical drawing style of Dutch cartoonist Michiel van de Pol that also has been a great influence, as well as the seemingly simple drawing style of my colleague Maaike Hartjes.”

Q: Who do you consider to be the natural audience for Science? Who would benefit most?

“I guess probably anyone in the school system – from high school through college to university. I hope it helps connect the dots of all the separate subjects. I'm aiming for an insight in the broad picture – something I didn't start to get until I was 22.” 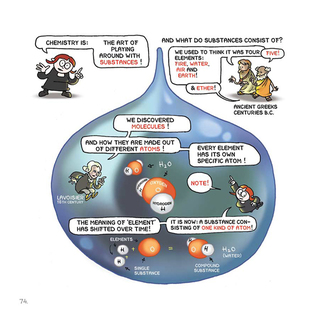 Q:  You chose to begin your history with classical Greece, and the in-story reason was that the Greek peninsula in 500 B.C. is where modern science more or less began. Did you research the pre-Greece science histories? Do you have anything to say about them, for perhaps a sequel?

“I know significantly less about those periods than about what came after. My husband knows more about this, that's why I put our discussion in the book, where we argue about where science began. We had a lot of discussions like that, and I loved drawing them. (I made them a lot more like fights than they were in reality though, a bit of heated controversy just makes for really nice visual back-and-forths.) I hope they also give a sense of history not being a fixed thing, but dependent on the point of view people chose.

Q: Your book makes science accessible and pleasant for all of us non-science types. What was it like from your end? Did you re-experience high school science quizzes, or was it fun for you, too?

“It was a lot more fun than school! I felt like I finally had an angle on the scientific subjects, something I never had as a student. Plus, there was no stress about examinations. I did show the book in the final stages to a team of knowledgeable people – a microbiologist, a math teacher, a physicist – and they found some minor inaccuracies (I missed one digit of pi, for example) and made some very helpful suggestions about stuff I left out or that was unclear. But this was a very welcome collaboration, not an examination at all.

“In the end, I felt like I had done a whole four-year university course in one year. I learned a lot, and enjoyed myself doing it. I hope other will people will also.”

Q: I particularly enjoyed your depiction of the science vs. religion debate as a bickering couple, but you depicted it so well I don't have any questions!

“Thanks! That scene was actually the very first chapter I drew for the book. I was asked to do a talk for a Mennonite church community about science, religion and comics, so I drew this and used it as a discussion starter.

“The relationship between science and religion is really my pet subject: I did my dissertation on it for my bachelor in Theology, in which I graduated in 1999. I have a very optimistic view about the compatibility of science and religion, probably as an antidote to the modern debate which only seems to feature the extremes on both sides: it's either/or – if you believe in God, you don't believe in scientific theories; if you're a scientist, you're supposed to feel only disdain towards anything spiritual. I think that's very wrong, and that there is a huge middle ground in which both scientists and religious people coexist, cooperate, and often even are the same person.

Q. What's next for you and Yiri?

“At the moment we're working on a historical project about King Willem I of Holland for Museum Meermanno in The Hague. It's a wonderful break from making books, and I love the opportunity to work on something educational in the setting of a museum.

“Eventually, I want to continue this series of 'Discoveries in Comics' – we have done Philosophy, Science and Religion (the latter one is not out in the U.S. yet, but maybe next year). I have ideas about a book about the Brain, Love, Death – but also World Domination. That last title will be about global politics, only from a very personal point of view: What would I do if I were boss of the world?”

After conquering science, philosophy and religion, that may not be a hypothetical question for Margreet de Heer!

I love Gonick's Cartoon History books, so I'll have to check these out. On the face of it, de Heer's books look like they have a similar sensibility, so it's interesting that she's never read any Gonick. Maybe there are some common influences between the two creators? I don't know who Gonick points to as his influences. His stuff started out as underground comix--and there's certainly a strong irreverent, anti-establishment tone to them--but there must be other visual influences.