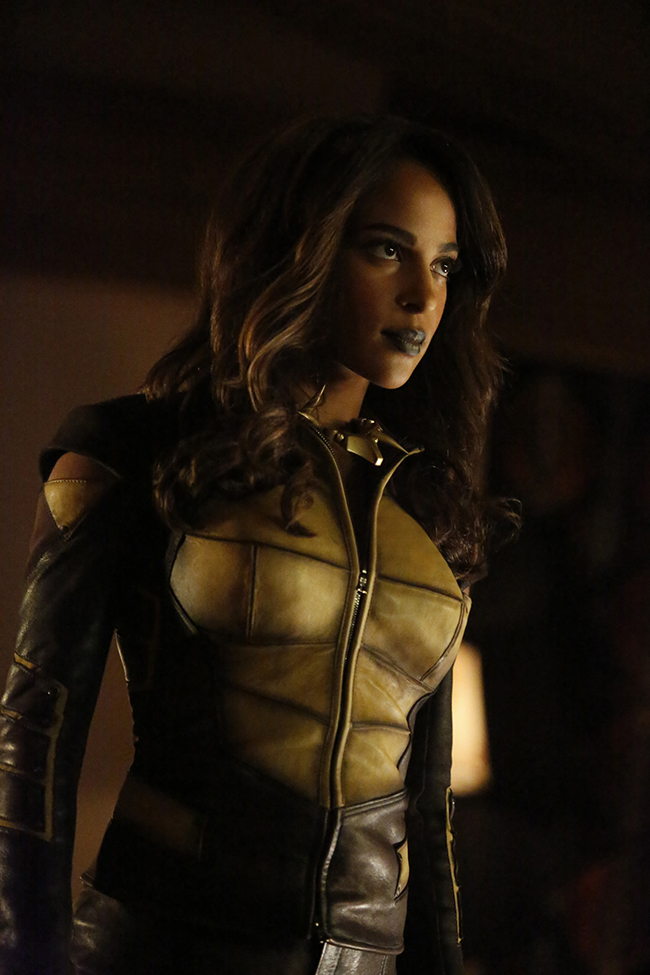 On Arrow, Megalyn Echikunwoke plays Vixen, a DC superhero who can mimic the abilities of animals. Photo: Bettina Strauss/ The CW © 2016 The CW Network, LLC. All Rights Reserved. 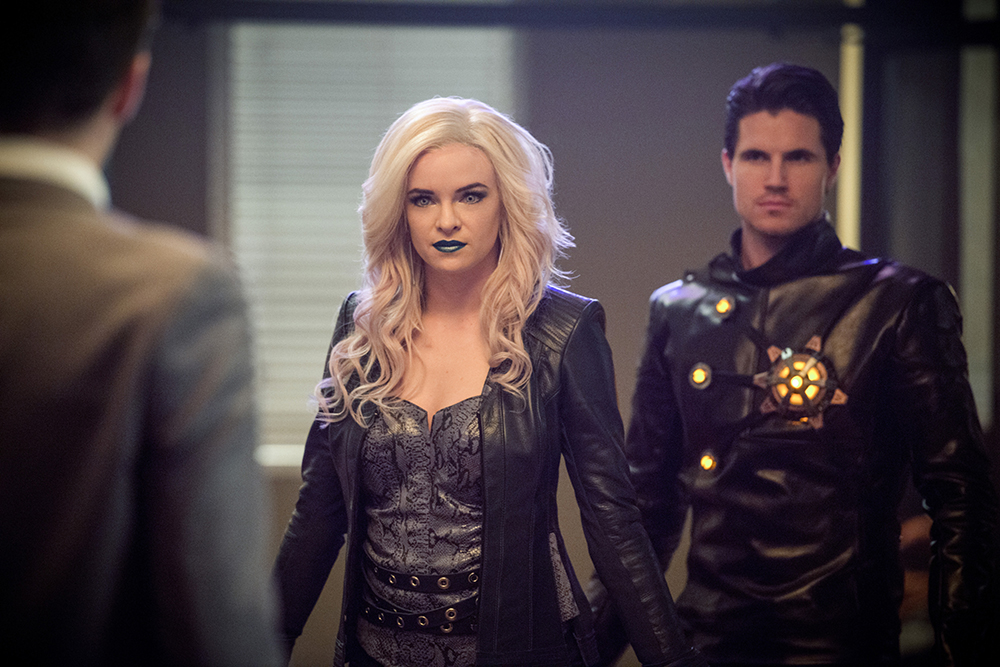 On Flash, Danielle Panabaker is Killer Frost and Robbie Amell is Deathstorm, two villains who have different backstories than their DC Universe counterparts, but are still recognizable to comics fans. Photo: Diyah Pera/The CW © 2016 The CW Network, LLC. All rights reserved. As a number of comics-related TV shows go on hiatus in early March, it’s a good time to look at some of the Easter eggs turned over easy for our viewing pleasure.

The disturbance in the Force you heard Wednesday, Feb. 24, was millions of fan voices crying out in glee as Vixen made her live-action debut on Arrow.

Vixen, who wears a magical totem allowing her to mimic any ability in the animal kingdom, has always been a woman before her time. Originally created in 1978, model Mari McCabe of the fictional country of Zambesi was destined for her own series when an unforeseen contraction at DC Comics put her on the shelf. Had the original plan succeeded, Vixen might well have been the first woman of color to headline a U.S. comic book series.

Eventually Vixen was inserted into the DC Universe in an issue of Action Comics, and a few years later joined the Justice League. She continued to appear with various teams, including the Suicide Squad, Birds of Prey and Checkmate. She had one solo miniseries in 2008, which evidently didn’t sell well enough to earn an ongoing title.

Mari has also been pretty active on television, but only the animated variety. She had numerous appearances on Justice League Unlimited as well as a team-up with B’wana Beast and the Caped Crusader on Batman: Brave and Bold.

It seems now that Vixen’s time has finally come. It probably helps that women of color are starring in a lot of TV shows these days, from Scandal to How to Get Away with Murder to Empire.

In August 2015 Vixen was awarded a six-episode animated series on CW Seed, The CW’s online streaming platform. Not only did the series guest-star the TV versions of Green Arrow and Flash, but Vixen was set in the same universe as their shows, and the previously established characters were voiced by actors Stephen Amell and Grant Gustin, respectively. Arrow returned the favor by guesting Vixen – Green Arrow knew of her, he said, because they had “an animated adventure” together – where she was played by the same actress who voiced the character on CW Seed, Megalyn Echikunwoke. And you’ll see her again: Vixen has been greenlighted for a second season.

Meanwhile, one of Arrow’s subplots involved an illegitimate son of Oliver Queen named William. Green Arrow does have at least one illegitimate son in the comics, the son of a woman named Sandra Moonday Hawke, who was of Korean and African descent. Her son, Connor Hawke, grew up idolizing his father and took on the mantle of Green Arrow for a while, beginning with his introduction in 1994.

Does that name sound familiar? If so, it’s because “Connor Hawke” is the name used by John Diggle Jr. a.k.a. Green Arrow when the Legends team is stranded in 2046 Star City for a while. That was a wink to Green Arrow fans, who doubtless explained it to whoever would listen, as I am doing now.

Connor and the Legends team battle Deathstroke II in 2046, who is Grant Wilson under the hood, the loving son of the original Deathstroke. That one, at least, is true to the comics (sorta). Grant Wilson was introduced in 1980 as the son of Slade Wilson, but went by the name Ravager. He was killed, resurrected and apparently died again. as he became an undead Black Lantern. After the 2011 reboot of the DC Universe, Grant is once again alive, only now he hates his father and hires supervillains to kill Slade. Oh, how sharper than a serpent’s tooth …

Speaking of names sprinkled into Legends, the team also battled a Soviet scientist in 1986 named Valentina Vostok. In DC lore, Vostok is a cosmonaut who inherits the mantle of Doom Patrol member Negative Man, and becomes, of course, Negative Woman. On TV, she instead has the origin (sorta) and the appearance of another DC character, Firehawk. But Firehawk is an American woman named Lorraine O’Reilly, a Firestorm ally and a white hat, so the resemblance is only superficial.

Legends of Tomorrow will take a two-week hiatus after March 10.

Since Flash is dealing with Earth 2 these days, a concept about the nature of the DC multiverse going back to 1961, the entire show is one enormous Easter omelet. I will mention that it’s fun to see such characters as Killer Frost, Deathstorm and King Shark appearing murderously on my TV screen, even if they’re not quiiiiiite the same characters as the ones on the printed page.

Oh, and the “promethium” cage they planned for King Shark? Promethium is the DC equivalent of Marvel’s adamantium, the fictional metal that makes up Wolverine’s skeleton. So it’s, you know, pretty tough.

Oh, the fun we’ve had on Supergirl! Bizarro, Toyman, Master Jailer, Indigo – the DC villains are coming fast and furious, and are (mostly) recognizable from the comics.

But there’s also some throwaways that are just as fun, when you know the code. DEO Agent Danvers mentions Starhaven, which is the home of superhero Dawnstar in the 31st century Legion of Super-Heroes. A conversation between Danvers and DEO chief Hank Henshaw slyly references the obnoxious, unkillable, cosmic bounty hunter Lobo (“If he were in town, we’d know about it.”).

Plus, one alien planet the DEO gang mentions is Trombus. Never heard of it? That’s because it’s appeared exactly one time, in Superboy (first series) #144 in 1968.  Trombus is the home of the Hyper-Family, which despite the name, is not a group of kids with ADHD. They are instead a sort of funhouse version of the Superman family. The backstory is that Hyperman, Hyperwoman, Hyperboy and Klypso the Hyperdog escaped their exploding planet to land on Trombus, under whose red sun they gained Kryptonian-like super-powers. Hyperboy was about the same age as 1968’s Superboy, and they had an adventure that is just too silly to go into here. Which, of course, is awesome.

But most importantly, Supergirl recently had an adventure titled “For the Girl Who Has Everything,” lifted directly from a famous story by Alan Moore named “For the Man Who Has Everything.” Yes, that Alan Moore, the one who wrote Watchmen, V for Vendetta, From Hell and League of Extraordinary Gentlemen, all of which were better in print than on screen, but are justly legendary nonetheless.

Anyway, in Moore’s version (first printed in Superman Annual #11, 1985), Batman, Robin and Wonder Woman join Superman at his Fortress of Solitude for his birthday. Unfortunately, so does intergalactic tyrant Mongul, who gives Superman a gift as well: the Black Mercy, a parasitic plant that puts you in a dream state where you imagine your perfect world while it slowly devours you, like a sarlacc. As Superman dreams of life on a Krypton that never explodes, Wonder Woman and Mongul engage in an epic battle where the overmatched Amazon uses her wits and cunning to stay alive while Superman eventually rejects the dream world … because he’s Superman.

And when he comes out of it, he is not a happy camper (if Kryptonians actually go camping, which I doubt). His first words, spoken in a spooky, quiet way, are: “Who did this to me?” That results in another epic battle between a smirking Mongul and a vengeful Man of Steel that ends too deliciously for me to spoil here. (“For the Man Who Has Everything” has been reprinted a lot, so a collection including it should be easy to find at any comics shop.)

The Supergirl episode might not have been able to include Mongul, Wonder Woman, Batman and Robin, but the heart of the story is still there. And that terrific line is there as well, as the Maid of Steel intones menacingly: “Who did this to me?” Great stuff!

Being a longtime DC comics fan, but not being a viewer of Arrow -- although I am a viewer of The Flash and Supergirl and Legends of Tomorrow -- I was pleased that a recent episode of the latter introduced a "Connor Hawke." However, the guy on TV made a point of saying he was using that name because he didn't want to use his father's name. So why did he use the name "Connor Hawke"?

Is there a simple answer to this question, or should I just take the headache medicine now?

Not that I know of. It's a pretty weird alias to pull out of the blue, but then, it was obviously a nod to comics fans (especially since Diggle Jr. wasn't white).

Action Lad and I just read this article together ... and he got the sarlacc reference before I did (and just corrected my misspelling of "sarlacc).

I've been outgeeked by the Lad!

Randy Jackson replied to Captain Comics's discussion Bond #5: 'From Russia, with Love'
"Regarding the book ending, perhaps the idea was that there wasn't just one James Bond, but…"
22 minutes ago

Randy Jackson replied to Captain Comics's discussion Bond #5: 'From Russia, with Love'
"My thoughts on the movie: This is a rarity for me, one where I actually read the novel --…"
32 minutes ago

Jeff of Earth-J replied to The Baron's discussion Movies I Have Seen Lately
"I liked Tripper in Meatballs. "
1 hour ago

Lee Houston, Junior replied to Steve W's discussion A Cover a Day
"I have no reason to think that this scene isn't taking place some place medical. (Image…"
1 hour ago

The Baron replied to The Baron's discussion Movies I Have Seen Lately
"I find that most characters that Bill Murray plays are thoroughly unlikeable."
1 hour ago

Jeff of Earth-J replied to Jeff of Earth-J's discussion The Abomination
"Actually, I have a theory about that (although you probably guessed that). If you were to consult…"
1 hour ago

Jeff of Earth-J replied to The Baron's discussion Movies I Have Seen Lately
"I have been trying to coax Tracy out of the house (other than work) with little success. THE ADDAMS…"
2 hours ago

Jeff of Earth-J replied to Steve W's discussion A Cover a Day
"Yes, Zachary Smith was originally a medical doctor (although they they later walked that…"
2 hours ago

Philip Portelli replied to Steve W's discussion A Cover a Day
"Correct me if I'm wrong but wasn't Doctor Zachary Smith a medical doctor, at least in the…"
3 hours ago

Eric L. Sofer replied to Steve W's discussion A Cover a Day
"No telling who's gonna be a visitor to a hospital... even in World War II!"
5 hours ago

ClarkKent_DC replied to Peter Wrexham's discussion Celebrity Mastermind - "The History of DC Comics"
"The only ones whose answers didn't come to mind immediately are 5 and 9; after a bit of…"
5 hours ago