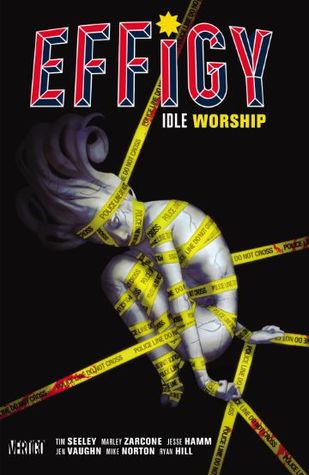 Great concept behind this series: a child star named Chondra Jackson who played a space cop on the kids' TV show Star Cops grows up and becomes a real cop in her home town of Effigy Mound, Ohio. But the show has such a rabid fan base--including conventions devoted to it--that she can't just walk away. When she catches her first real case, it's because it is intimately tied to the show and its fans. The community that has grown around the show on message boards, conventions, and cosplay is getting killed off, one by one.

Chondra's mother is a piece of work: a classic stage mother living vicariously through her daughter. She even arranged to have Chondra make a sex tape in an effort to update her image (which was humiliating, and didn't work); and now she's trying to pitch a reality show about Chondra's police work (without Chondra's knowledge).

There is also a significant mystical element in the story, in the form of a religious cult based on the writings of a science-fiction writer (must be a reference to author L. Ron Hubbard and the Scientology religion he founded, although it's probably not specific enough to garner attention from the Scientology Police). The twist is that there are real aliens involved, capable of taking over human hosts. Chondra and her partner are making progress on discovering how and why the cult is enabling the murders when the "Idle Worship" arc ends at part six.

Clearly the series was intended to go on. But instead of resolving the story line, the final issue in the collection is a stand alone. "Game Changer" (illustrated by frequent Seeley collaborator Mike Norton) tells the story of how author Larry Lauritz found himself being seen as a modern savior. Interesting, but far from a real ending. Which makes the series frustratingly incomplete. Marley Zarcone's art works for the story. Cartoony, with minimal backgrounds. But the characters are distinctive, and he does a good job on the periodic nine-panel "talking heads" pages, where the challenge is to keep the different poses dynamic enough to make a page of exposition with one character speaking to the camera visually interesting.