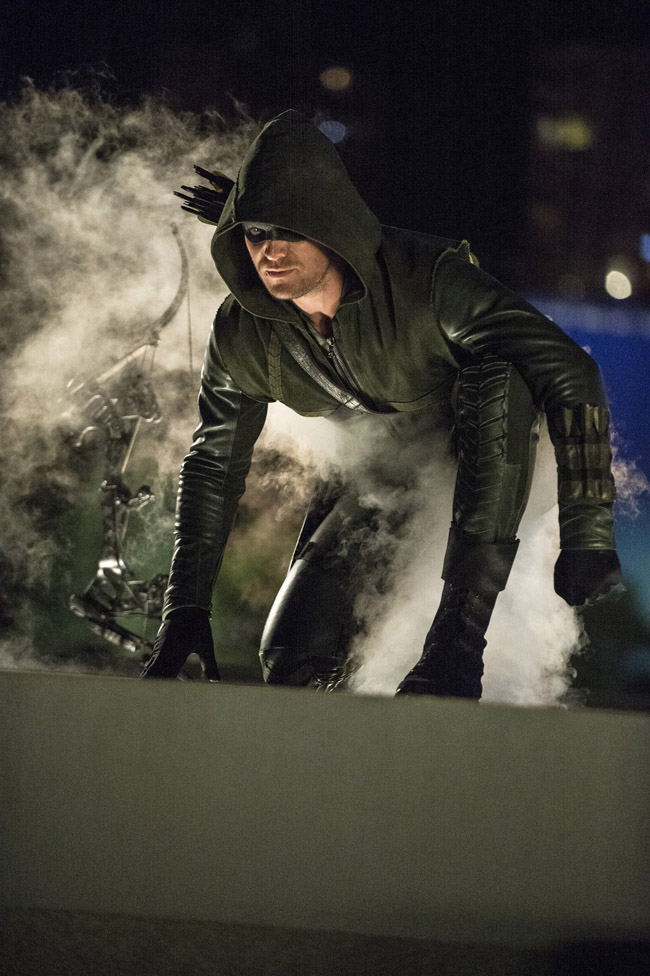 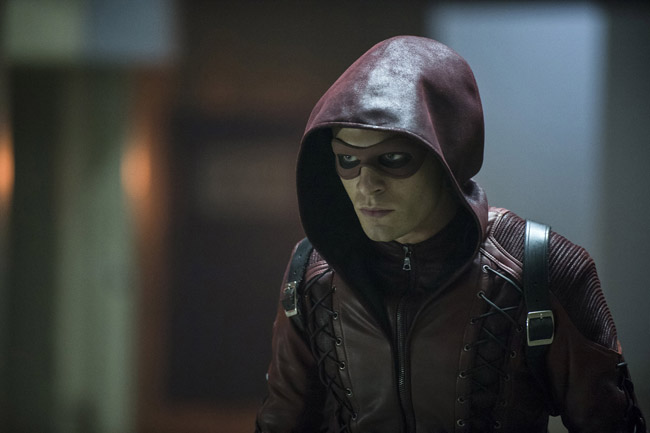 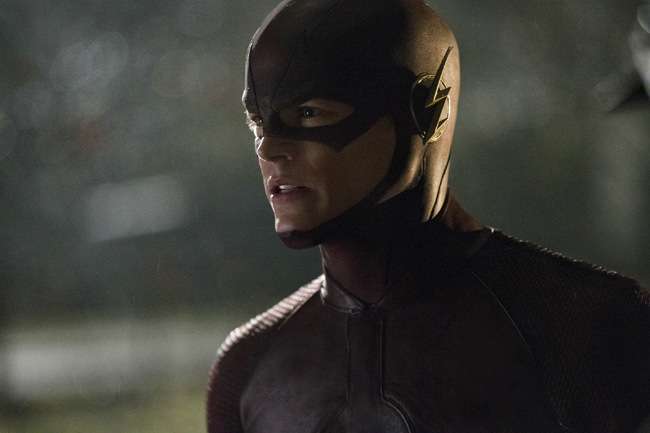 Grant Gustin plays both Barry Allen and The Flash in the new CW show premiering Oct. 7. Oct. 2, 2014 -- The super-speeding superhero from DC Comics, The Flash, is premiering in his own series on The CW this month. But like the companion series Arrow, he varies quite a bit from any other version of the superhero you’ve seen before.

Speaking of Arrow, that series begins its third season Oct. 8. And if you’re familiar with the comics character Green Arrow, you know the TV show has varied considerably from its source material. As you’ll see in a minute, it’s appropriate that we discuss that aspect of Arrow before we get to The Flash.

In Arrow, many of the familiar elements of the comics Green Arrow pertain. For example, Oliver Queen’s vigilante persona (not yet called Green Arrow, but he’s getting there) has the same origin as the comics character did in 1959, learning trick archery for survival while being stranded on an island. And later in his career he picks up a sidekick named Roy Harper, who eventually goes by the name Arsenal. And later still, his love interest is fellow superhero Black Canary (just called “Canary” so far on the show).

But everything else on Arrow goes through a funhouse mirror. For example, the island on TV isn’t deserted, and Ollie meets a lot of important folks there, like the lethal Deathstroke, who started out as a Teen Titans supervillain in the comics. Plus Black Canary in the comics is Dinah Lance, who on the TV show is a lawyer, and it is her sister Sara who is the superhero.  Here again, Arrow swipes from another DC character’s sandbox, namely Batman villains Ra’s al Ghul and the League of Assassins,  from whom the TV Canary learns her hand-to-hand combat skills. (In the comics, Canary’s origin has nothing to do with either Batman or Green Arrow.)

As for Arsenal, in the comics Roy Harper was originally called “Speedy,” and … you know what, it just doesn’t matter. The one on the TV show has a new, unique origin, and it works just fine. In fact, all of it works just fine – I think the TV Green Arrow is actually a whole lot more interesting and plausible than his comic book counterpart. And since he’s portrayed by the charming Stephen Arnell, whose abs are a special effect all on their own, even my wife likes the show.

Oh, and in the eighth episode, Arrow will have a crossover with The Flash. Yes, a genuine crossover, where one story runs through two properties, and the heroes team up (or fight, and then team up). Just like in the comics!

Which is as it should be, because just like all the characters above, the new Flash got his start on Arrow. Barry Allen, a forensics scientist with the Central City Police Department, visited Arrow’s Starling City in the second season, and soon after got hit by a bolt of lightning, turning him into the Fastest Man Alive.  And when Barry’s own series launches Oct. 7, Arrow will guest star to get him off on the right boot.

Then The Flash, just like Arrow, will start introducing bunches of characters from the comics. Look for Simon Stagg, a creepy millionaire out of the pages of Metamorpho. Then we’ll see bad guy Multiplex (he can duplicate himself) and good guy Firestorm (who can transmute objects at an atomic level). Then one of Flash’s greatest villains from the comics will debut, Captain Cold (who has mastered absolute zero, where atoms – and super-speedsters – don’t move at all). And, as mentioned, in the eighth episode we’ll see the Flash end of the crossover with Arrow, with Captain Boomerang – originally a Flash villain in the comics – as the bad guy.

Also just like its parent show, Flash will keep the basics of the comics character, but won’t be a slave to what has come before – either in comics, or on TV. (There was another Flash series in 1990, that only lasted one season. It starred John Wesley Shipp as Barry Allen, an actor who will appear on the new Flash as well.)
In the comics, the first Flash – there have been several – began in 1940, a guy named Jay Garrick who gained super-speed from a lab accident. But the show is ignoring that one altogether, so forget I mentioned him.
DC launched a second Flash in 1956, this one the familiar police scientist named Barry Allen. (The TV show will keep that part.) But that Flash was considered so boring that DC killed him off in 1985, and didn’t bring him back until 2008! To rectify the boring part, DC’s Chief Creative Officer – and Flash executive producer – Geoff Johns introduced a new wrinkle to Barry’s characterization: His mother had been murdered by a mysterious super-speed blur, and his father was convicted (erroneously) for that murder, which is why Barry became a forensics scientist. (The TV show is keeping most of that, too).
But the show is also using a group of scientists from S.T.A.R. (Scientific and Technological Advanced Research) Labs to help Barry explore and understand his powers, an element lifted from the the third Flash, Wally West, who wore the red-and-yellow suit during the time the second Flash was dead. (So far there’s no Wally West planned for the TV show, but in the comics he’s the nephew of reporter Iris West, who is in the new show, so anything’s possible.)
There’s one more critical element from the comics that is being kept for the TV show: Barry Allen is a nerd. And not just any nerd, but one who was shown reading comic books in 1961 – long before comics were considered cool enough to get their own TV shows!
And, you know, that’s pretty awesome. For one thing, it means that Barry is pretty good at the scientific part of being a superhero – and, in fact, invented a special mask for Oliver Queen over in Arrow. Further, most nerds are pretty decent guys – and as portrayed by ultra-likable actor Grant Gustin, that comes across in spades on Flash.
So I’ll be watching both Arrow and The Flash. If nothing else, they might beat the movies to creating a Justice League. And if they do, it won’t be like any other one you’ve seen before!
Reach Captain Comics by email (capncomics@aol.com), the Internet (comicsroundtable.com), Facebook (Captain Comics Round Table) or Twitter (@CaptainComics).