Fairest Vol. 3: The Return of the Maharaja 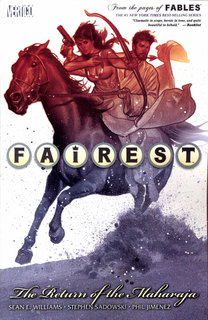 Fairest Vol. 3: The Return of the Maharaja

This is another Fairest story arc that risks being seen as about the male lead rather than the female one. The Maharaja on the throne through most of the story is none other than Prince Charming, who is his usual dashing self. The strikingly beautiful heroine is a Fable as well, but not much is made of that in-story, and few non-Indian readers would be familiar with her.

When Nalayani's village is attacked, she goes on a quest to seek help from the new Maharaja. She became the village's defender when the village was stripped of men when the Adversary's army invaded her fabled land, and she's extraordinarily good with a bow and arrow. She also represents an earlier incarnation of Draupadi, the chief female heroine in the Hindu epic Mahabharata. Williams even uses some of her legend in his plot, although I had to do a bit of research to ferret that out.

In the course of the story Prince Charming receives a curse that can only be cured by true love. Which seems like a death sentence, but he truly falls in love with Nalayani. Ironically, she is completely immune to his charms. Nice twist there. But since the reader has been familiar with Charming (and Nalayani is effectively a new character), the story becomes about his character development.

As the story ends Charming and Nalayani are returning to the Mundy together, so there may be further complications there, either in later Fairest stories or in Fables. The art starts out at a very high level, with Sadowski's pencils and Jimenez's inks. But as the story goes on six other artists contribute, often alternating pages within a single issue. They do a heroic job maintaining a level of visual consistency, but the stylistic shifts can't help but distract sometimes.

I nearly quit reading Fairest because of this storyline, because it was more about the male co-star than the ostensible female lead. I don't like bait-and-switch.