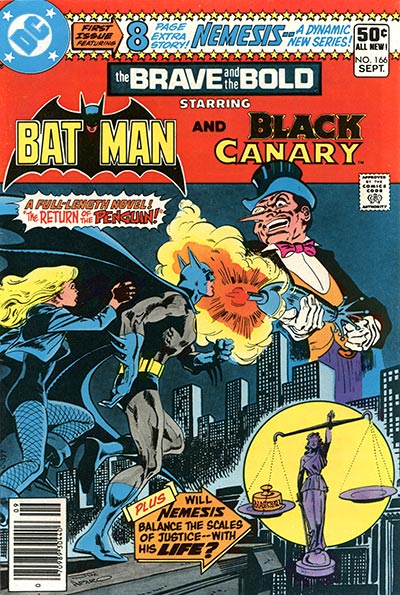 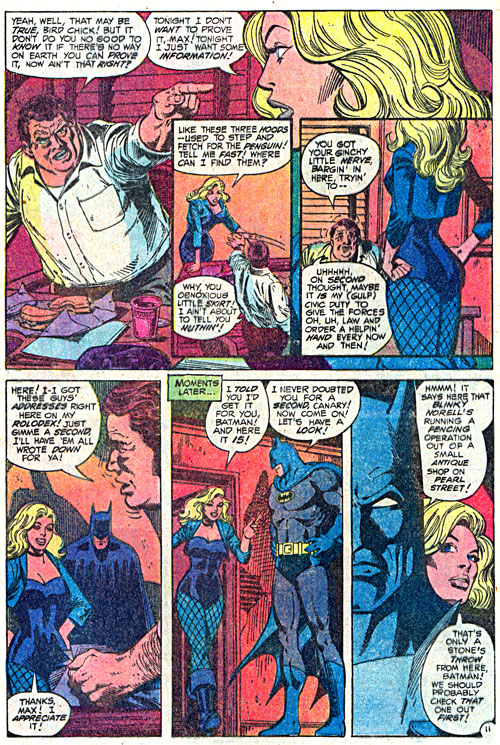 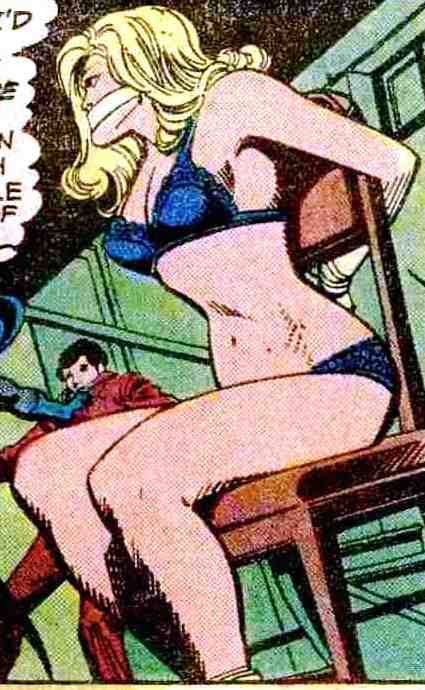 When Brave and the Bold #166 (S'80) came out, it was one of my regular DC books and it featured Batman teaming with his JLA teammate, the Black Canary. Now the Blonde Bombshell never came out well in her B&B appearances but even my fifteen year old self knew this one was wrong on so many levels!

Written by Michael Fleisher, best known for The Spectre and Jonah Hex, it portrayed a Black Canary who clearly was not qualified to help the Dark Knight against the terrifying menace of......the Penguin! She tried to interrogate a criminal who was completely unimpressed with her until, unbeknownst to her, Batman stands behind her! She is taken captured by the Penguin's men far too easily and is their helpless prisoner.

The Penguin sends an impersonator to basically seduce Batman as if that was her normal behavior. And where did they get a Black Canary outfit? They stripped it off her and left her tied up in her underwear! She doesn't escape; she waits until Batman comes to rescue her where she kisses her hero!

First Black Canary is treated like a novice compared to Batman when she started her career in 1947! She is a member of the Justice League who battled cosmic menaces and world-wide threats and she can't handle the Penguin?? To put it into context, in Justice League of America #135, it took Green Arrow FOUR panels to stop the Bold Bird of Banditry!

And she possesses a real, honest super-power!

Now Dick Giordano drew this story beautifully as usual but he was a major Black Canary contributor so making her just the fan-service of the tale is mind-boggling!

The Bronze Age didn't give Black Canary too many highlights but this is her nadir!

This story could not be published today and I'm still amazed it was out in 1980!

That's true but they didn't travel as the Black Canary usually either with Superman or Green Lantern or the JLA's matter transmitter.

The Freedom Fighters used some Earth-X scientist's device and may have had different technology!

It was the Freedom Fighters who got new powers travelling between Earths, at the start of their series.

One thing about Black Canary in Brave & Bold: She was occasionally drawn by Nick Cardy in her B&B appearances, in which case I stopped looking at the word balloons.

,,,Did Michael Fleisher (the one who sued Gary Groth) have a thing for " scantily-clad-femmes in bondage " stories ?

I remember a certain Spectre one...

In the tv show Zoo they seem to be doing that, the one with the glasses seems to know everything.

Movie and TV writers do that, too, especially with scientists. A geologist is also a physicist, and sometimes a doctor, too!

(So I suppose she shifted from being good at judo to being a good martial artist generally. I don't know if she was ever already represented that way in the 60s.)