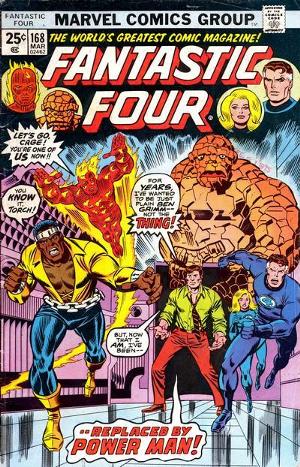 Sweet Christmas, indeed, as I got this for Christmas in December 1975 when I was 10!

The previous issues of Fantastic Four, #166-167 (Ja-F'76), had the THING revert back to his human form of Ben Grimm, due to being exposed to the Hulk's gamma ray emissions. Of course, that never happened in the first ten or twelve times these tortured titans tussled nor did it happen again the multitude of times they fought afterwards.

This issue, Fantastic Four #168 (Ma'76), came courtesy of Roy Thomas (writer/editor), Rich Buckler (penciller) and Joe Sinnott (inker) and was titled, "Where Have All the Powers Gone?"

As can be expected the FF is down a member as their charter for "Fantastic Four, Inc." clearly states that there must be four super-powered heroes on their roster! Before they can deal with Ben, Johnny wants to leave, too. He was rejected by a girl (the future Frankie Raye) and now wants to try to have a "normal" life, preferably in a flame-resistant environment!

"Normal" Ben is adjusting to his new reality with a very sexy Alicia Masters. Actually it just hit me that Ben is probably too old for her. He fought in World War II so if he was twenty-five in 1945, he'd be fifty-five in 1975! Granted Alicia had been around for about ten years now but she wasn't linked with WWII and Ben was! Still Ben is starting to regret his loss of power, fame and purpose. No one seems to want or need him anymore. At least he's no longer whining about Alicia only loving him when he's the Thing!

Shockingly, Ben still thinks that he can be part of the Fantastic Four and feels betrayed that Reed has replaced him (rather quickly, it must be noted) with LUKE CAGE, POWER MAN! Luke first appeared in Hero For Hire #1 in 1972 so he was still a relatively new character. He had fought Spider-Man in Amazing Spider-Man #123 (Au'73), held his own against Iron Man in Power Man #17 (F'74) and even traded blows with the Thing in the then-recent Marvel Two-In-One #13 (Ja'76). Luke is sympathetic to Ben's situation but Ben won't hear it. After a very brief TV interview, Ben realizes that only as the Thing was he considered "important".

Suddenly an alarm goes off and the FF monitor a bank being broken into. (They have all this set up because Reed has a safety deposit box in that bank! I wonder if the bank knew about the extra security!) The team flies off in the Fantasti-Car and Ben demands to go along. They investigate and see that the culprit is none other than The Wrecker, a longtime Thor villain who battled Power Man in The Defenders #17-19 (N'74-Ja'75). But he doesn't know why he wanted to rob that particular bank and why he was expecting to battle the FF.

Recklessly Ben tries to stop the Wrecker two times and is quickly defeated each time! But the others use teamwork to save him and stop the Wrecker. But Ben is hardly grateful and leaves depressed and dejected.

Even as a kid, I knew that Power Man was not equal to the Thing in strength as he seemed more in Spider-Man's class. But with the other powerhouses on other teams: Thor (the Avengers), the Hulk (the Defenders), Sub-Mariner (the Defenders AND the Invaders, like Reed would get him anyway!!), Hercules (the Champions), Colossus (the X-Men) and Black Bolt (the Inhumans), the choices were limited. The only one I could think of was the SILVER SURFER and he was probably too busy commiserating! And they never altered his outfit or at least put a "4" on it somewhere!

Maybe they were hoping to boost the sales of Power Man...

Ben was angry over a lot of things: being replaced, being forgotten, realizing that he could no longer be a super-hero, Cage getting paid and, most importantly, being made to feel useless.

Still I wonder why there was no interest in Ben? No offer to write his memoirs? No position in SHIELD? No speaking engagements? It wasn't that Ben needed a publicist, he needed a GOOD publicist!!

Next: You Can't Get Good Help These Days or the More Things Change...

No, it's from the (in)famous tale where Luke Cage went all the way to Latveria to collect payment for services from Dr. Doom! From Luke Cage, Hero for Hire #9 (May 1973). Details here, from Comic Book Resources: "I Love Ya But You're Strange: 'Where's My Money, Honey?'"

I know I read this issue. Don't remember the quote, but it has been 40 years.

I have both Essentials, so count me in!

I'm thinking my next reading project, once I'm finished with Howard, may well be Luke Cage: Hero For Hire.

I'm going out of town on Wednesday for about a week, but I could probably start it when I come back.

I have both Essentials, so count me in!

I'm thinking my next reading project, once I'm finished with Howard, may well be Luke Cage: Hero For Hire.

Bleah.  He can't even handle the stupidest super-villain this side of the Guardians and Odin.

Oh, and I think this is the link you meant: So is Doom a Deadbeat or What? Or not.  CBR seems to be doing something odd with redirection.

Richard Willis, if you can get through to that link, that's the sequence in reference between Luke Cage and Dr. Doom.

That's right. My guy is so tough he can handle Batman AND Superman.

I was finally able to see it by going to CBR, doing a search for Luke Cage, and paging through all of the results until I came to it. The "where's my money, honey?" line was so good they should have made it stand out in the lettering. It didn't jump out at me and I may have missed it originally. Doctor Doom didn't have any reaction to it either. 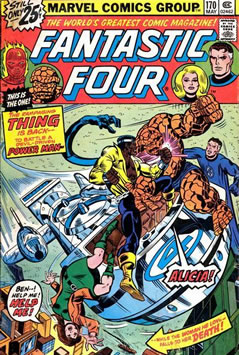 Both Ben and Johnny are shocked to see another Thing in the Baxter Building with Ben assuming that it's the Reed Richards/Thing from Counter-Earth...Earth-Two...Earth-A but Reed quickly reveals that the silent Thing is an exo-skeleton designed for Ben. It would mimic his durability and duplicate "most of the strength he used to possess".

After recapping Power Man's rampage, the Human Torch is benched with a sprained arm with the Invisible Girl staying behind as well.

Ben learns how to move in his new exo-suit and that Reed customized it so that it would only work for him. Yet Ben still feels that he is somehow cheating as a super-hero which angers Reed (finally)!

I do all the work, as always----and YOU stand around feeling sorry for yourself!

(Reed conveniently forgetting about the whole "lack of shielding" thing!)

Reed threatens to give someone else the suit but Ben fights back, saying that he doesn't want to be "just" Ben Grimm anymore.

Then they realize that Alicia is gone and who must be behind Cage's attack! Since he took the Fantasti-Car, Reed and Ben break out the original Flying Bathtub version! Reed also tells Ben that Luke Cage was donating most of his FF pay to charity!

Meanwhile (as they say), Alicia arrives at a maximum security prison, compliments of Warden Darryl Williams who owes her a favor and seems a bit smitten by her. The inmate she wants to see is, of course, her stepfather Phillip Masters, the PUPPET MASTER. She accuses him of controlling Power Man with his radioactive clay even though he's been locked up. Alicia uses her sensitive fingers to find a hidden cubby hole with a glowing Power Man figurine. The Puppet Master is outraged that Alicia has betrayed him (again). He snatches the puppet and immediately summons Luke Cage to free him and grab Alicia, but gently. We also learn that Luke is still basically himself but must obey the Puppet Master so he can be more effective.

Suddenly they are attacked mid-air by the Thing and Mister Fantastic. Cage and Ben battle aboard the Fantasti-Car with the Cay-Fueled Controller demoing revenge! Their clash rocks the aircraft, causing the Puppet Master to drop the doll and knock Alicia off the ship. He tries to save her but both fall off only to be saved by Reed. Luke is freed from Masters' contrl and the fight is over with both the Puppet Master and Alicia in tears for different reasons.

Afterwards, Luke Cage returns to his office in Times Square (and his own book) and the Thing contemplates finally proposing to Alicia!

While it's great to see George Perez's early Marvel work in a major title, Joe Sinnott's inking tends to overwhelm it at times, though obviously he's trying to keep an uniformed look. But there is the famous Perez attention to detail!

Ben's exo-suit is an update on the remote control robot Reed built in Fantastic Four #40 with better results. However I still don't know how the helmet works! Is it controlled by his facial expressions? Does the mouth need to open for Ben to speak? Is it sealed? Airtight?

And the suit is designed "only" for strength and durability. Yet it could be more like Iron Man's armor. Why doesn't Reed give it short-range jets? Or long-range blasters? Or tracking equipment? Or even a built-in "4" flare signal? Or anything that might be useful? Reed doesn't really think outside the Thing box, does he?

Also I never liked the Puppet Master. He was always drawn like a caricature and we share (somewhat) the same name! Oh the humanity!

Plus Marvel has too many mind-controlling villains: the Purple Man, the Enchantress, Mesmero, the Ringmaster, the Controller, the Corrupter, even Dracula. Not to mention, practically every major Marvel villain used mind control at some point!

And they never followed up on Ben wanting to marry Alicia!

Reed doesn't really think outside the Thing box, does he?

I don't recall, but was Ben's (latest) transformation public knowledge?  Perhaps Reed was trying to hide the fact that this was a Thing-Suit and not actually the real Thing ( (c) The Coca-Cola Company).

Ben's loss of power was public knowledge in NYC at least.

I do. I consider him more an FFer than an Avenger

They do give a reason for the brevity of Power Man's stay.

btw, I know that Marvel does but does anyone here consider Cage a former FF member? 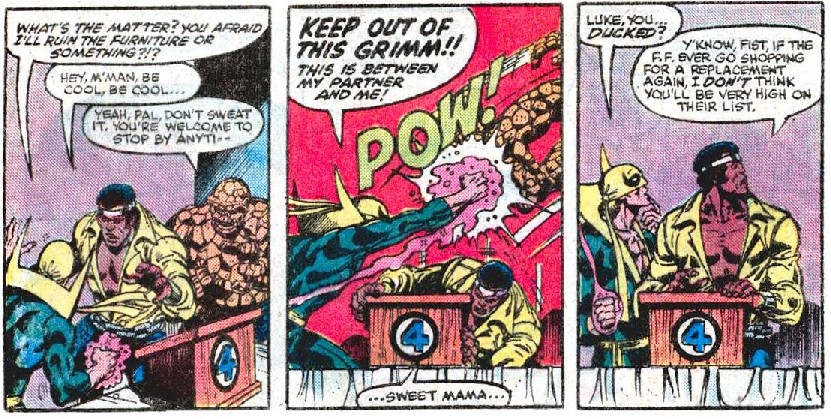 A postscript from Fantastic Four Roast #1:

Danny has a little "FF Envy"! 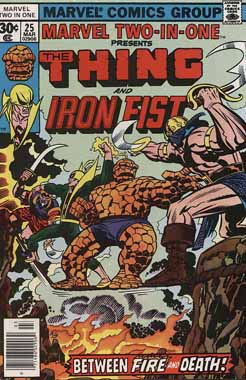 The Thing met Iron Fist much earlier than that!