I jst recently bought , at my LCS , a Marvel Milestone Edition facsmile reprint of the entirety of FANTASTIC FOUR #1 - for a dollar .

Let's try re-reading this story , with what we know now .

It's been manymanymany times reprinted , so , unless anyone here is SO anti-Marvel that they-Well , I shudder to think !

Anyway , let's find , if we can , some version of the story and comment about it again , from today's perspective and maybe imagining what it might'vbe seemd like in '61 .

FF #1's story is a book-length , 25-page , story - taking advantage of a first issue's then-not needing to have a Post Office-required text page , possible etcetera , to be a little longer , and I suppose that its' title is just that , " The Fantastic Four ! " , as Reed's non-equally-sized raygun flare letters spell out on the splash page ( I first read it in FANTASTIC FOUR SPECIAL #7 , from '69 , incidentally . )...

That makes sense...except I thought Stan had been told it kill the book, and so the Spider-Man idea was a throw-away for the last book?  Exactly how far was it between AF #15 and Spider-Man #1 anyway?  They didn't follow the very next month, eh?

The chapters format of the early FF could have been a holdover from the monster books, but the early Justice League stories also followed the chapter format.

As for Spider-Man, I understand that the four stories spread over the first two ASM books were originally designed to appear in Amazing Fantasy 16 thru 19, with Ditko backup weird stories, before they knew he would have his own book.

I've been thinking about this style of story telling...and also the way that the Hulk stories were busted up into chapters. And how the first two Spider-Man issues contained two "stories". I'm thinking this is a hold-over from how the monster comics from the pre-hero period were formated in only three to five pages each. 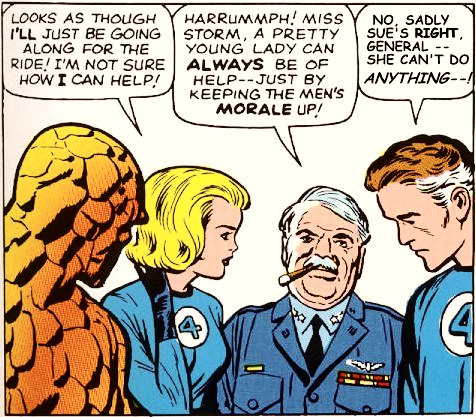 Which issue is this from?

I know it was a major problem in the early days when Sue was the perpetual hostage. By stealth she saved the day a few times, but it was pretty demeaning.

It was just a panel I found on the 'net that I was having a little fun with. Here is the original.

I shared both versions with my 19 year old daughter late last night, and she reacted by saying "They're both pretty misogynistic pieces of crap, you know...."  (Knew I shouldn't have sent her to college...)

I think they're both pretty offensive.  I note that this appears in FF #12, immediately after they spend half of #11 trying to defend and build Sue up, despite her self-deprecating tone and attacks from the fans as well!  Sheesh, Stan... what are you trying to do here???

"this appears in FF #12, immediately after they spend half of #11 trying to defend and build Sue up, despite her self-deprecating tone and attacks from the fans as well!  Sheesh, Stan... what are you trying to do here???"

Makes me wonder how the guy who wrote the STORY would have written the DIALOGUE (if he'd been given the chance).

Hi Kirk G, there are lots of comic book lettering fonts available. I used a font from Paint, but there are better to download for free.

Just to let everyone know I removed a comment here that was inappropriate.

While looking through that Marvel Masterwork that contained FF #12, I noticed something odd. The quality of paper changes about mid-way through the reprint of FF #11 in my edition. It's a much softer, more textured paper, more similar to newsprint for the first dozen or so pages, and then changes to the slick, white paper for the rest of the volume.  The way the colors and ink sits on top of the page instead of sinking in and pentitrating the page REALLY makes a difference in how I perceive the work.  I wish the whole series was printed on that softer, more newsprint related paper instead of the garish colors that result.  That's my biggest complaint about the whole Masterworks series...that the FEEL of the printing has changed the FEELING of the issues as a result.

(As a kid, it was all about smelling the ink and the slight mustiness of the paper that absorbed moisture from the air over time.)

Jeff of Earth-J replied to The Baron's discussion Movies I Have Seen Lately
"FROM RUSSIA WITH LOVE: I'll save my comments for Cap's discussion (which should be up…"
2 hours ago

Jeff of Earth-J replied to Jeff of Earth-J's discussion T.H.U.N.D.E.R. Agents
"ISSUE #10: The same format as the previous two issues, except the artist for the present day…"
7 hours ago

Richard Willis replied to The Baron's discussion Movies I Have Seen Lately
"JD DeLuzio said: Speaking of Mansters, I re-watched Matinee for the first time in many years.…"
7 hours ago

Jeff of Earth-J replied to Jeff of Earth-J's discussion T.H.U.N.D.E.R. Agents
"ISSUE #9: Same artists and format as last issue. I think by #8 I was reading only the Mike Grell…"
7 hours ago

Richard Willis replied to Steve W's discussion A Cover a Day
"No-one has objected.  Does that mean we have the next four months lined up? Feb 2023 -…"
8 hours ago

Richard Willis replied to Steve W's discussion A Cover a Day
"I think that's a good idea, too."
8 hours ago

Jeff of Earth-J replied to Jeff of Earth-J's discussion T.H.U.N.D.E.R. Agents
"ISSUE #7: NOW: Aboard a plane, Colleen peruses her mother's file. Her mother is the Iron…"
8 hours ago