Farewell to our Sarah Jane

Permalink Reply by The Baron on April 20, 2011 at 9:06am
Watched "the Hand of Fear" last night.  The combination of Elisabeth Sladen and Tom Baker is what made me a life-long Doctor Who fan.

Permalink Reply by John Moret on April 20, 2011 at 9:59am
I am planning to watch the SJA story with the Brig and her tonight in memory of both their recent passings.

A photo gallery from the BBC. 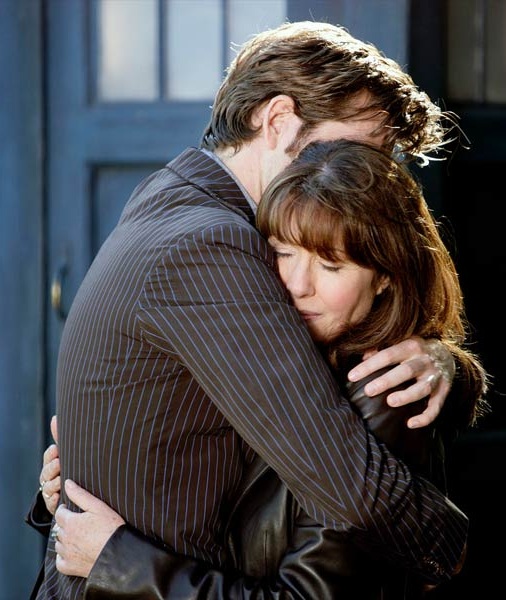 The Classic Doctor Who channel on You Tube now has a Sarah Jane tribute page.

Permalink Reply by Doc Beechler (mod-MD) on April 20, 2011 at 10:57am
“I used to think, ‘Oh, when I’m grown up, I’ll know what I want. I’ll be sorted.’ But you never really know what you want. You never feel grown up, not really... But after today, I don’t want to... There’s strangeness to be found wherever you turn. Life on Earth can be an adventure too. You just need to know where to look.” - The Sarah Jane Adventures

On a more serious note. I posted the following on my Facebook wall earlier this evening.

"Elisabeth Sladen has passed away. The Universe mourns. The TARDIS shutters, and the man who is more than he appears to be pauses to wipe a tear from his eye."

Like a lot of fans, I started with the Tom Baker/Sladen episodes via PBS. Thankfully they eventually backtracked to the Jon Pertwee era so I got to see Sarah Jane Smith from the beginning.

Even when "School Reunion" first aired, I could tell Sladen/Sarah Jane had not lost a step.

It is a dang shame that no network here on 'this side of the pond' has aired any SJA episodes beyond season 1. We've missed the final appearance of Nicholas Courtney as the Brigadier, Sarah teaming up with both the 10th and 11th Doctors, and who knows what else? Yes I know most of that is available on DVD, but you folks know what I mean.

The show literally can't go on without her, but thankfully we'll always have our memories.

The CBBC channel, which shows the Sarah Jane Adventures in the UK, is planning a special tribute program on Saturday, and both Lis Sladen and Nicholas Courtney will be remembered at some point in the Doctor Who broadcast.

Also, they apparently filmed half of the planned six stories for the fifth SJA series - and one of them may have been the final episode.

Okay. I'm man enough to admit that I'm a bit confused here over these references throughout the web to the "last" Sarah Jane Smith Adventure.

I understand that three full stories (six episodes, since they do two per adventure) were completed of what would have been Season Five this fall.

Yet is there actual proof that Sladen, knowing the end was near, got with the series producers to film a grand finale adventure while she still could?

That doesn't make sense in light of the (confirmed) data I have on hand, especially since she signed to do more Big Finish productions with Tom Baker before she succumbed.

Lee Houston, Junior replied to Steve W's discussion A Cover a Day
"Another Neal Adams variant and his original work he homaged. (Images courtesy of the Grand Comics…"
3 hours ago

Richard Willis replied to Jeff of Earth-J's discussion E-Man
"I loved the original Charlton E-Man (with Mike Mauser!) also. I've never read any of the later…"
5 hours ago

Jeff of Earth-J replied to John Dunbar's discussion Marvel and DC Golden, Silver, and Bronze Age collections
""...the collections and OGNs in the "August" list are actually solicited for…"
6 hours ago

The Baron replied to Captain Comics's discussion Conan license yanked from Marvel Comics
"Didn't they just put Conan on an Avengers team?  Bet they feel like suckers now."
7 hours ago

Captain Comics replied to John Dunbar's discussion Marvel and DC Golden, Silver, and Bronze Age collections
"I don't doubt you're right, Jeff. There's a LOT of delay these days. I've got a…"
7 hours ago

Jeff of Earth-J replied to John Dunbar's discussion Marvel and DC Golden, Silver, and Bronze Age collections
"The Phantom Stranger Omnibus was originally solicited for May 24 release, so we may…"
9 hours ago