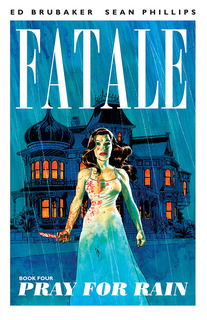 By Ed Brubaker and Sean Phillips

Book Three went way back, into the history of the Fatale, including women who fulfilled the role before Josephine, the Fatale of this series. This collection returns to the present, taking up the story of Nicolas Lash, who is in prison after losing everything after meeting Josephine. As the story opens he is trying to piece together the differences between Dominic's manuscript and the published book he was shocked to discover when we last saw him. Before he can figure it out he is broken out of prison by a man named Nelson, who says that "she sent me."

The story shifts to Seattle in 1995, where a member of a one-hit rock band is robbing a bank to finance the band's new video, which they hope will revive their career. During his escape he encounters a woman on the road, bleeding and nearly naked. For some mysterious reason he takes her in. Of course it's Jo, but she has lost her memory. She jokingly calls herself "Jane Doe" and becomes part of the house shared by the band members.

Which brings us back to the present. Nelson takes Nick into a cellar with runic markings on the floor, after explaining that he edited Dominic's manuscript before publication to prevent it from having the fatale influence. He tells Nick that he knows the words that will lead him back to Josephine. As the book ends he knocks Nick unconscious. One more collection for the grand conclusion!