'Fifth Beatle' is a fascinating look at Fab Four's matador

“Brian was a flawed and imperfect hero, but he was a hero all the same. … So like all worthy heroes, why shouldn’t Brian Epstein have a life in comics?” 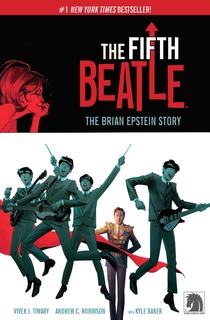 So said Vivek J. Tiwary in an essay at the back of The Fifth Beatle: The Brian Epstein Story, a graphic novel he wrote that has arrived in paperback ($14.99, Dark Horse). Despite the darkness at the heart of the story – Epstein had a number of problems, including the drug addictions that ended his life at 32 – the book is an ebullient, colorful biography, and the quote represents it quite well.

Epstein, for those not up on their Beatle history, was the first to recognize the band’s potential. He managed and guided them to international success, virtually created “Beatlemania” and in the process creating a new model for the music industry. Without him, the band might have ended in obscurity, playing in low-rent Hamburg nightclubs to the last.

Or not. But this isn’t a book about The Beatles – it is definitely Epstein’s story. Yes, The Beatles are somewhat overpowering, but they and all the other legendary figures in the swirl of the British Invasion remain supporting characters. The young Beatles are charming and witty, Col. Tom Parker gives an unforgettable performance, Ed Sullivan appears in strange fashion, and so forth. But the spotlight remains firmly on Epstein, one of perhaps the few characters in the rise of The Beatles to not be researched to tatters.

And it is a charming, wonderful book. Especially if you play the appropriate era of Beatles music as you read it, which Tiwary cleverly suggests with just the right amount of title and lyric references in captions and dialogue. That’s an easy thing to overdo, but like everything else in this book, the mix is just right.

Including the aforementioned dark parts. There’s a brutal scene of an alleyway beat-down that launches the book, just as The Beatles are on the verge of launching to stardom.

That scene was the result of one of Epstein’s problems: He was gay, in an era where that could get you arrested. He was also Jewish, when that could exclude you from most of polite English society. Both had to be disguised in some way, and perhaps that’s why Epstein seemed ashamed of them, and remained a permanent outsider while simultaneously a member of the “In Crowd.”

And Epstein’s drug use – he died of an accidental overdose of barbiturates and alcohol – isn’t ignored. But while Epstein is depicted frequently taking a variety of prescription drugs, the details are left unspoken. The closest the book comes to specifics is scenes with doctors prescribing something for “anxiety” and to curb Epstein’s “intimate … inclinations.” But, for heaven’s sake, this is the Swingin’ ‘Sixties, so even death can be an adventure. Tiwary chooses to demonstrate Epstein’s legacy with hallucinatory conversations on his deathbed, and it is a powerful finish.

None of which would matter, of course, without an artist strong enough to evoke the wonder, hope and, yes, love of the period. (As noted in the book, The Beatles sang about love a lot.) That artist also has to be terrific at depicting famous faces, such as in one scene toward the end that includes The Beatles, The Who, Marianne Faithfull, the Rolling Stones, Eric Clapton and George Martin.

Fortunately, Fifth Beatle is blessed with two such artists.

Andrew C. Robinson painted most of the book, and his work is transporting – to an era, to a feeling, to an experience that those of us who lived it will never forget. Robinson does so with watercolor abetted by a mix of media, from full pencils, to Photoshop, to pen-and-ink, to ink brush, to white gouache.

“Since I did not want to shoot for photorealism, I wanted a treatment of the characters that would be slightly cartoony while also naturalistic,” Robinson writes in his own essay in the book, which includes sketches. “This would allow me the freedom to visually tell this historical event with a fresh perspective.”

Without photorealism, Robinson had to create his characters with cartoons and caricatures that were instantly recognizable. He said of his Beatles, “It took some time to study each member’s face, from ears to noses. I’ve always been a fan of Mort Drucker and now I have even more respect for his talent as one of the best caricature artists ever. Whenever I got stuck trying to hit a likeness, I just went to his art book for guidance.”

Drucker, as all MAD magazine fans know, was responsible for decades of terrific movie and TV satires – more than 400 of them – with caricatures of actors both witty and spot on.

But Drucker isn’t the second artist on the book. That honor goes to Kyle Baker, popular among comics cognoscenti for his beloved graphic novels Why I Hate Saturn and The Cowboy Wally Show, and a memorable run on Plastic Man.

Baker taps into his genius for zany, breathless, hilarious storytelling to illustrate the Fab Four’s ill-fated 1966 concert trip to the Philippines. After Epstein had inadvertently insulted the imperious Imelda Marcos – wife of the brutal, corrupt dictator Ferdinand Marcos and famous for, among other things, her enormous collections of shoes – the tour group barely escaped intact. (I recommend you play “Help!” while reading the escape-to-the-airport sequence.) 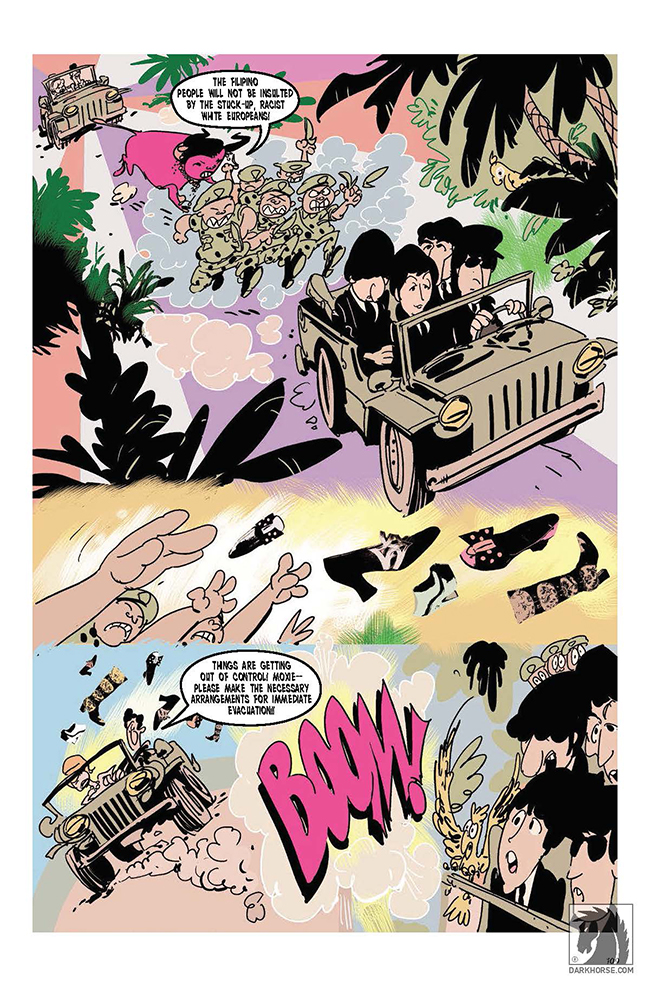 Artist Kyle Baker illustrates The Beatles’ ill-fated concert trip to the Philippines in 1966, utilizing a cartoon style at variance from the watercolor painting of the rest of the book. Copyright Dark Horse.

The Fifth Beatle was first published in hardback in 2013, and has won numerous awards, including the Will Eisner Comic Industry Award for Best Reality-Based Work and two Harvey Awards, including Best Original Graphic Album. The paperback version

And it’s an important story, as well as a good one. As Paul McCartney said in a 1997 BBC interview, “If anyone was the fifth Beatle, it was Brian.”

* Thoreau: A Sublime Life (NBM, $19.99) is a biography of the 19th century Massachusetts philosopher who famously retreated to nature at Walden Pond. Written and colored by Maximilien Le Roy and drawn by A. Dan, it’s offers little in the way of pizzazz or cleverness – it’s a straightforward story of the man’s life, peppered with his own words, rendered in the primitive style I find unattractive.

But it’s still recommended. That’s because Thoreau wasn’t just some backwoods thumb-sucker, but a man who influenced folks as diverse as Martin Luther King Jr., Mahatma Gandhi, the Occupy movement, “sovereign” citizens, militias and environmentalists. Thoreau was a man whose principles affected his own time (he was an ardent abolitionist) and are still vital and viable today.

If nothing else, read the essays in front and back of Thoreau for an eye-opening understanding of how a guy who lived in a log cabin in the 1860s influences us today.

* Marie Antoinette: Phantom Queen is an attractive piece of fluff about the ghost of the famous 18th century aristocrat haunting a woman in the early 1900s at Versailles. Antoinette wants her remains properly buried (evidently the French Revolution wasn’t careful about such things) and the modern woman’s inheritance is in danger from a suitor scheming to have her committed. The two women, of course, work together to achieve their individual goals.

The story jumps back and forth from the past and the early 1900s at Versailles, and is rendered in a lush watercolor by Annie Goetzinger (Girl in Dior) that makes both eras suitably attractive. The story is by the artist and Rudolphe Goetzinger, and says almost nothing about the French Revolution or why Antoinette makes for a poor hero. That may be a flaw – it enraged my wife, who thinks the French royalty of the day had it coming – so take that into consideration.

Got The Fifth Beatle last year.  I didn't get into the Beatles until I was a teen in the mid-70s, but when I did I got hooked good and in one form or another have all of their released recordings and at least a dozen books about or inspired by them, including The Illustrated Beatles, with various works of art based on their songs.

Anyhow, The Fifth Beatle is a great work of pop culture history & art and well-worth getting both for those who love Beatles' music and those who enjoy illustrated stories. Truth to tell, there was a lot of joy & tragedy in the full Beatles' history, and Epstein played a pivotal role in that, helping them to rise to the Toppermost of the Poppermost, but having to deal with his own private demons that destroyed him even as the Beatles were riding ever higher on artistic creativity and popular appeal.  Tiwary also deals with Epstein's apparent and unrequited love for John Lennon, which if true was likely another source of despair for him.  An entertaining and thought provoking work.

I really have to get around to reading this. I saw the creators (Tiwary and artist Andrew Robinson) give a presentation on it at HeroesCon the summer before it was first released. It was an interesting look at the creation of the book, and their enthusiasm was infectious.