From Kryptonian Shakespeare to frozen wastelands, here are five more graphic novels for your bookshelf

Jan. 28, 2021 — My Teetering Tower of Review Stuff is in danger of toppling over, so let’s cover as much ground as we can: 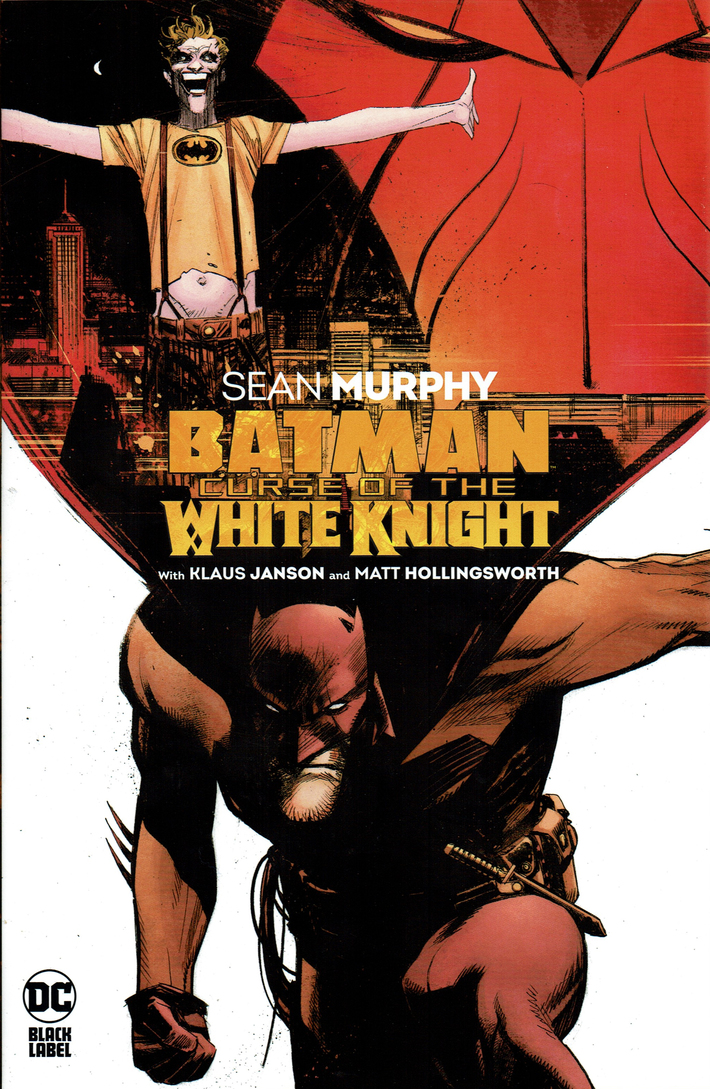 Batman: Curse of the White Knight (DC Comics, $39.99): It’s not your Daddy’s Batman! Come to think of it, it’s not even your older brother’s Batman.

A couple of years ago, comics multi-hyphenate Sean Murphy wrote and drew a miniseries about … oh, let’s call it a parallel-universe Gotham City. In this world, Batman is so out of control that Bruce Wayne sets up a Batman clean-up fund to replace all the stuff the Batmaniac breaks. Another difference is that The Joker gets cured, and Jack Napier (as he called himself) gets himself elected to the city council. And there are two Harley Quinns, the one we saw in Batman: The Animated Series (who also gets cured) and a second one, the Suicide Squad version, who is a lot more lethal.

So, The Joker is a “white knight,” you see, trying to protect Gotham from its obsessive vigilante, with a calm and rational Harleen Quinzel at his side. Murphy turned the status quo upside down.

Curse of the White Knight is a sequel, where The Joker personality takes over Napier again, and he goes bad. And Batman reforms and goes good. And … wait a minute! It IS your Daddy’s Batman!

Deadman Omnibus (DC Comics, $99.99): I don’t usually review reprint collections, since committed comics fans will already have them, and casual readers won’t care. But this one might be of interest to the casual reader, or at least the reader who falls somewhere between casual and committed.

Deadman is — or was — a circus aerialist who gets murdered, and is then resurrected as a phantom by a mystical Eastern deity to “correct the balance” between good and evil. He does this by possessing the living, and using their bodies to fight evil. His morbid name (and costume) are explained by the circus act, in case you’re wondering.

This book covers 20 years of Deadman stories, from his origin in 1967 to a re-telling of that story in 1987. But Deadman rarely had his own series in those years, instead appearing (invisibly) as a peripatetic guest star (ghost star?) in a host of other people’s books. Which means reading these books is like a tour of DC Comics across two decades. And what a show it is!

You get Old Guard writers of the ‘60s (Arnold Drake, Bob Haney) bumping elbows (and credits) with the Young Turks of the ‘70s (Len Wein, Marv Wolfman) and ‘80s (Andy Helfer). You have some of DC’s best-ever artists (Neal Adams, Jose Luis Garcia Lopez) and some of its worst (you’ll know them when you see them).

Come for the dead guy. Stay for the history. Frankenstein; or, the Modern Prometheus ($29.99, Gallery 13): Yes, you’ve read this book. Or maybe, as Stephen King describes in the foreword, you’re one of the many who started the book and didn’t finish, disappointed that it wasn’t as terrifying or lurid as the movies.

Well, I’m not going to argue Frankenstein with you. I loved it from the first time I read it at 12, have heard from the haters all my life, and I just don’t care to travel that ground again. I will say you absolutely have to have Frankenstein on your shelf to have any nerd cred, and since you do, you ought to have this version, thanks to Bernie Wrightson.

Wrightson came to fame as the artist on the first Swamp Thing series, a mediocre book that probably would have quickly vanished if not for Wrightson’s inspired artwork. His intricately inked, incredibly detailed art has always been better than whatever story he was assigned, but where he shone the brightest was in a Frankenstein trade paperback a few decades ago. He didn’t draw the whole thing as a graphic novel, but instead illustrated a series of … I don’t know, what do you call occasional illustrations in a novel? Whatever they’re called, he did a bunch of them, and nearly blew my adolescent mind.

This edition of Frankenstein has a bunch of those illustrations, or maybe new ones — my copy of that old book is long gone, so I can’t compare. But Wrightson passed in 2017, so these are probably the old illustrations, resurrected for a new generation. Whatever they are, they’re by Wrightson, so they’re gorgeous. And you need them. 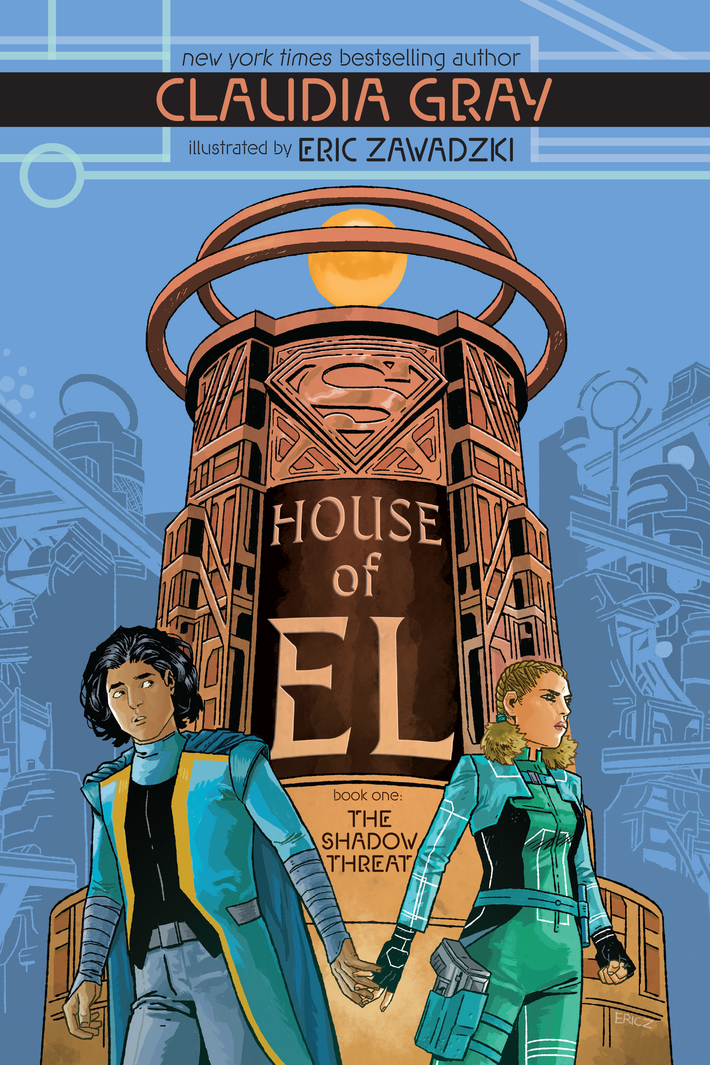 House of El Book One: The Shadow Threat stars upper-class rebel Zahn-Re (left) and blue-collar soldier Sera-Ur, who will undoubtedly have a teen romance, despite living in a society that is a genetically engineered caste system. Holy Romie-Oh and Julie-Et, Batman! (Cover art by Eric Zawadzki, copyright DC Comics)

House of El Book One: The Shadow Threat ($16.99, DC Comics): This is the first of a three-book series, so fair warning: It ends on a cliffhanger.

But that’s about my only complaint about this book. It’s set a couple of years before the destruction of Krypton, but unlike the TV show Krypton, takes its time connecting to Superman. It actually focuses on two teens with unfamiliar names — Zahn-Re and Sera-Ur — whose connection with the usual suspects (Jor-El, Lara, baby Kal-El, General Zod) isn’t immediately apparent.

And I like these kids. Oh, it’s obvious they’re going to have a teen romance, as they are polar opposites who always snipe at each other whenever they meet. But that’s almost required in a YA novel, and writer Claudia Gray gives us enough background on the pair to make ‘em likeable.

Gray is well known for her Star War novels, the Evernight series and other nerd favorites, and her expertise shows in other ways, too. For one thing, she does some impressive world-building, giving us a Krypton never seen before, while still coloring largely within the wider lines of the mythos. And it’s one that makes sense, gives us instant motivations and explains how and why this advanced civilization let apocalypse sneak up on them.

Eric Zawadzki’s art also has to do a lot of world-building, and does so without being obvious. It’s easy to fall into this world, which fits together seamlessly. And, weirdly, the rendering and faces occasionally remind me of an obscure artist named Pat Boyette. That’s not going to mean much to most people, but old comics fans out there are doubtless nodding their heads, recalling 1960s Peacemaker and Blackhawk. Fondly recalling, I should say. Snowpiercer the Prequel Part 2: Apocalypse is, as the title hints, the second part of a trilogy that explains how we arrive at the first Snowpiercer graphic novel. (Cover art by Jean-Marc Rochette, copyright Titan Comics)

Snowpiercer the Prequel Part 2: Apocalypse (Titan Comics, $19.99): The cynical among us will likely point out that Snowpiercer — the graphic novel that inspired both a movie and a current TV show — was meant to be a standalone, and will roll their eyes at the furtherance of the story. And, no doubt, they’re right.

I’ve already been impressed with how Matz continued the story in two sequels, given how the ending of the first book didn’t leave much wiggle room. (Or survivors.) It was not only plausible, it continued what is so awesome about Snowpiercer: Its social consciousness; its juxtaposition of brutal necessity and a high-tech environment; and its thoughtful, downbeat vibe. The prequels do the same.

Sadly, there is no Sean Bean. That’s just on the TV show.

"I don’t know, what do you call occasional illustrations in a novel?"

I call them "spot illustrations."

And, yes, I fell in love with Frankenstein the first time I read it, too. I have a clothbound (or a cloth-covered hardbound, whatever) version of the Wrigthson edition with, I think, all of the illustrations. In any case, I also have a set of postcards of the illustrations left out of the first edition (I got rid of my tpb, too), so I'm covered either way. I love the lyrical language of the text. I have it on audio, too.