GNs teach about the blues, country music and Persia -- and entertain

Some graphic novels are as much public service as they are entertainment.

Take, for example, William Stout’s Legends of the Blues (Abrams ComicArts, $19.95). Not only is it gob-smackingly good, but it’s a treasure trove of information about the often elusive figures at the heart of blues history. 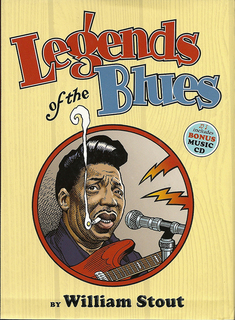 Older readers may remember the classic 1980s Heroes of Blues, Jazz and Country trading cards by comics legend R. Crumb (since collected in book form by Abrams). If so, you’ll recognize that Stout’s book is essentially a continuation of Crumb’s cards, which had illustrated portraits of blues men and women on the front, and biographical information on the back.

Stout’s book is very similar, with witty and authoritative -information about 100 (yes, one-zero-zero!) seminal blues musicians, with ink-and-watercolor illustrated portraits on the opposing page. Stout’s style is reminiscent of Crumb’s, but he is still his own man, and these gorgeous portraits seem to capture the distinct personalities of each historical figure.

Legends is so much a continuation of Crumb’s work that Stout deliberately avoided duplicating any musicians already included in the trading-card set. Which doesn’t mean this book lacks for stars, including as it does famous names like Billie Holliday, Robert Johnson, B.B. King, Ma Rainey, Bessie Smith, Muddy Waters and Howlin’ Wolf. The names that aren’t as familiar seem to be just as important in the birth of the blues, though, and you get the feeling the incredibly knowledgeable Stout could come up with another 100 off the top of his head.

And if that wasn’t enough to sell you, Legends of the Blues includes an actual CD containing 14 classic blues tracks from Shout! Factory. I swear, if a blues fan tried to imagine a greater tribute and/or encyclopedia of these amazing Americans, he couldn’t dream up anything better than what Stout has done.

This isn’t just a graphic novel. It’s a slice of Americana that gives these musicians the credit they’ve always deserved. And if you’re more country than blues, no worries: Abrams has you covered with The Carter Family: Don’t Forget This Song ($24.95). This graphic novel follows the first family of country music – who sold millions of records between 1922 and 1944 – from their hardscrabble beginnings in rural Virginia, to fame, fortune and all the benefits and problems that entails.

I’m not quite as enthusiastic about Carter Family, though, possibly because I’m not much on country music. But maybe it’s because it’s a fairly mundane rags-to-riches story, as written by Frank Young: Family records records. Records sell. Family signs record contract, makes money. Or maybe it’s because I find artist David Lasky’s work to be fairly mundane as well. But maybe – and this is important for a Memphis lad – because Young’s attempt at Southern accents got really tiresome after a while.

Still, it’s important music history, and I recommend it for that reason alone. 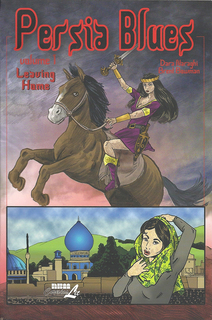 And speaking of history, we learn some outside our borders in Persia Blues Volume 1: Leaving Home (NBM, $12.99). Persia, as most people know, is the ancient name for Iran and that’s significant, because this book – part one of a trilogy – takes place in both Iran and Persia!

There’s a straightforward story about a rebellious young Iranian girl who grows up in repressive modern Iran and by the end of this book flees to the U.S. to study. As the book is written by Dara Naraghi, himself a rebellious young man who grew up in repressive modern Iran and fled to the West, it’s pretty accurate in its depiction of the country. Write what you know, they say.

But there’s another story paralleling the main one that’s more abstruse: We see our heroine in ancient Persia, battling creatures straight out of that country’s rich mythology on some sort of quest. Is it a dream? A fantasy? An alternate world?  That’s a mystery for another volume, but in the meantime we get to learn some Persian folklore.

The modern sequences are pen and ink, courtesy of artist Brent Bowman, while the Persian ones are in an ink wash. (The entire book is black and white.) I’m not blown away by either, as Bowman’s rendering, anatomy and facial expressions look like they could use some more seasoning.

But Bowman’s blocking and storytelling are clear, and the stories sufficiently compelling to carry the reader forward in a story with settings rare for an American adventure story. And that setting alone is enough for me to recommend this book, as it behooves all of us to get to know Iran a wee bit better.