As several new books demonstrate, history can be fun.

First up in order of awesomeness is Star Trek: Federation – The First 150 Years (Titan, $29.95). As you can guess from the title, it’s a history book of events that haven’t happened yet – and yet they have, in the sense that we’ve seen them on TV and in movies. 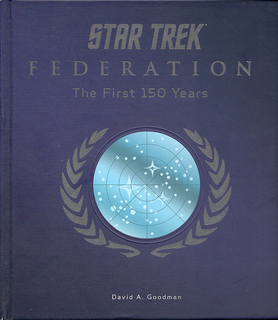 The book opens with elements of the film Star Trek: First Contact, with Zefram Cochrane’s launch of the first faster-than-light vehicle, and subsequent meeting with the first aliens man would see, the Vulcans. But instead of a summary of the film, Federation encapsulates events as a history book would, with references to other academic sources (fake ones, which are nonetheless listed in the fake bibliography), copies of treaties, news articles, quotes from the principals, etc.

Federation continues in this vein chronologically through the future history of Earth, as established by the Star Trek franchise. Following First Contact, for example, are the significant developments as they happened on the TV show Star Trek: Enterprise, including the evolution of the Vulcans out of authoritarianism, first contact with the Klingons, the Romulan War, and so forth.

This faux history, which also includes events only mentioned and never seen, wraps up with the death of Captain Kirk, and the end of his era. That leaves room for a sequel covering subsequent series: Star Trek: The Next Generation, Star Trek: Deep Space Nine and Star Trek: Voyager.

Needless to say, this is a must-have for Star Trek fans – not only for the thrill our little hobby presented in such an authoritative, academic form, but also for the fun of trying to place references like “Nimbus III” and “Curzon Dax.” And this particular fan liked it, because he didn't like the depiction of Vulcans, contradictions with established Trek history and other anomalous elements in Enterprise, and this book incorporated those events in an evolving history where they made more sense. But even those without an encyclopedic memory of fantasy fiction should enjoy the book, if for no other reason than a handy background reference for whichever Star Trek show they happen to be watching at any given time.

Federation isn’t a graphic novel, but it does have some illustrations. They are painted, but not to my taste, so the less said the better. Had I done this book, I would have used actual screen grabs or stills photoshopped as mug shots, Starfleet Academy IDs, news photos and the like.

But maybe Titan didn’t have authorization for such material. At any rate, the words are what’s important here, and they are clearly the work of a man who knows his stuff. Author David Goodman has written for more than 15 televisions series, including – as is obvious from deep knowledge displayed in the book – Star Trek: Enterprise. 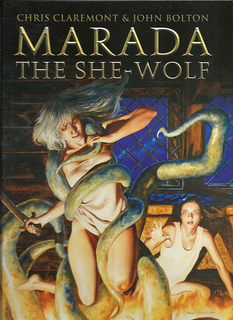 Jumping from the 23rd century to the first comes Marada the She-Wolf (Titan, $24.99), an oversized graphic novel collecting all the character’s appearances from the early 1980s in Marvel’s Epic Illustrated magazine.

Marada is written by Chris Claremont, famed for his trend-setting work on the X-Men, where he was known for exclaiming about new heroes “why can’t this character be a woman?” His foray into fantasy, as you’d expect, cast a female as the protagonist – a beautiful, platinum-blonde warrior who battles swords and sorcery across the Middle East at the time of Christ.

Those familiar with Claremont’s work may be surprised to find that his infamous purple prose rarely rears its head here. Characters still talk too much during battle, and some Claremont clichés are in evidence, but on occasion Claremont has the good sense to shut up and let the art carry the day.

And what art it is! Famous illustrator John Bolton delivers some of the best work of his career, finding the intersection of Barry Windsor-Smith, Hal Foster and his own beautiful, neo-classical style. Two of the three stories first appeared in Marvel’s black-and-white magazine Bizarre Adventures, but were fully painted by Bolton for Epic, while the third appeared in color at the outset. All are simply gorgeous, and worth the price of admission. 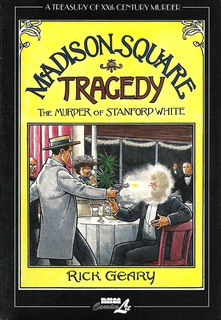 Finally, our time machine takes us to early 20th century New York, for another of Rick Geary’s "A Treasury of XXth Century Murder” productions. This one involves the death of the man who designed Madison Square Garden, ironically in a restaurant located in that famous venue, in Madison Square Tragedy: The Murder of Stanford White (NBM, $15.99).

Most of Geary’s “Treasury” books focus on infamous crimes or criminals, but I was unfamiliar with this one. Still, it’s quite a show, with a rich, famous, lecherous old man taking advantage of a young woman who is arguably the world’s first supermodel, before she is married to a Philadelphia millionaire who happens to be homicidally deranged.

The lecherous old man is Stanford White, whose libidinous pursuits were the talk of New York, while he made millions designing mansions for the nouveau riche in what amounted to a boom town. White brazenly availed himself of the benefits of wealth and fame, especially with showgirls, and had an apartment set aside for sexual liaisons, complete with a red velvet swing.

I’m not spoiling anything by saying White eventually paid for his pursuits with his life at the hands of the unbalanced Harry Thaw, who had married Evelyn Naughton, a model who had been “mentored” by White early enough in life that it was probably illegal. Thaw took exception to White’s behavior, rather violently, which results in the “tragedy” of the title.

As usual, Geary presents these lurid events in dispassionate, historical style, which somehow makes them even spicier. And his classic style, which suggests pre-Gutenberg woodcuts, is a perfect reminder that what we’re seeing is in the past, while the naughty details remind us that nothing is new under the sun, especially sex and murder.

Who says history is boring?

I remember seeing a PBS special about the White Murder. I think it was called "The Girl in the Gilded Cage." And it was called the Trial of the (New) Century.

I was talking with my wife about how "sex swings" occasionally show up in cartoons or movies or something, as a silent dog whistle alerting the audience that a given character indulges in a hedonistic lifestyle. I wondered if it was Stanford White's sex suite that inserted that idea in the popular imagination. I can't think of an earlier mention of such a thing.

Of course, I haven't read a lot of pre-1900 sex literature! I couldn't even make it through the Marquis de Sade's work. Anyone know?

I remember the Girl in the Red Velvet Swing, it was mentioned during the OJ Simpson trial and even before that there was a movie about it with Joan Collins.

The Federating book looks to me like an updated Star Trek Concordance, does it ignore the reboot movies?

Wow, the Girl in the Red Velvet Swing is a movie version of the Stanford White story described above! I'd bet good money that's how the sex swing made its way into the popular visual vocabulary.

As to Federation and the new movies, I wasn't really thinking about them when I read the book. But do they really vary that much from the general timeline established by First Contact, Enterprise and Star Trek TOS? In details, sure, but I don't recall anything that contradicts. Except maybe that the book says Kirk died on the Enterprise-B, whereas I remember him dying on a planet. (Clue description: Malcolm MacDowell, On a Planet. With a Bridge.) Perhaps the details were never revealed, so all anyone knows is that he died while serving on the Enterprise-B.

E.L. Doctorow wrote the novel Ragtime (which I have not read) based in part on the Stanford White murder. This was adapted into a 1981 movie and a stage play of the same name. The writer Norman Mailer plays Stanford White in the movie. This was also James Cagney's last movie. The Girl in the Red Velvet Swing is played by Elizabeth McGovern. She is called Evelyn Nesbit in the movie, not Evelyn Naughton. According to what I can find, Nesbit was her real name and she WAS the first supermodel. The Ragtime movie and play both treat the White murder as sort of an opening act. I don't know if the book has more on it. Ragtime is a sort of overview of the United States at the Turn-of-the-Last-Century, using a combination of historical and fictional characters.

E.L. Doctorow wrote the novel Ragtime (which I have not read) based in part on the Stanford White murder. This was adapted into a 1981 movie and a stage play of the same name. The writer Norman Mailer plays Stanford White in the movie. This was also James Cagney's last movie. The Girl in the Red Velvet Swing is played by Elizabeth McGovern. She is called Evelyn Nesbit in the movie, not Evelyn Naughton. According to what I can find, Nesbit was her real name and she WAS the first supermodel. The Ragtime movie and play both treat the White murder as sort of an opening act. I don't know if the book has more on it. Ragtime is a sort of overview of the United States at the Turn-of-the-Last-Century, using a combination of historical and fictional characters.

I read Ragtime ages ago, but barely remember it, and I've never seen the movie. I recall that the movie left out two of the three main subplots from the book.

I also recall that the director was so happy to get James Cagney on board, he said he would let him play any role he wanted -- male, female, a child, whatever!

Let me throw my support behind Rick Geary's new work. I read it pretty much the week it came out and it was great. I am late to this series he has been doing, but I burned through about half a dozen of them last year. I did hear about them years ago in CBG (Heidi MacDonald's column if memory serves), but never saw them in any shop. They have all been great, and he puts a lot of research into the books.