A friend of mine lives in Germany, where they have two Free Comic Book Days. The American comics day is in line with ours (May 7th), while the German comics day was yesterday. Here's the list of free comics available there (click on it for a bigger version): 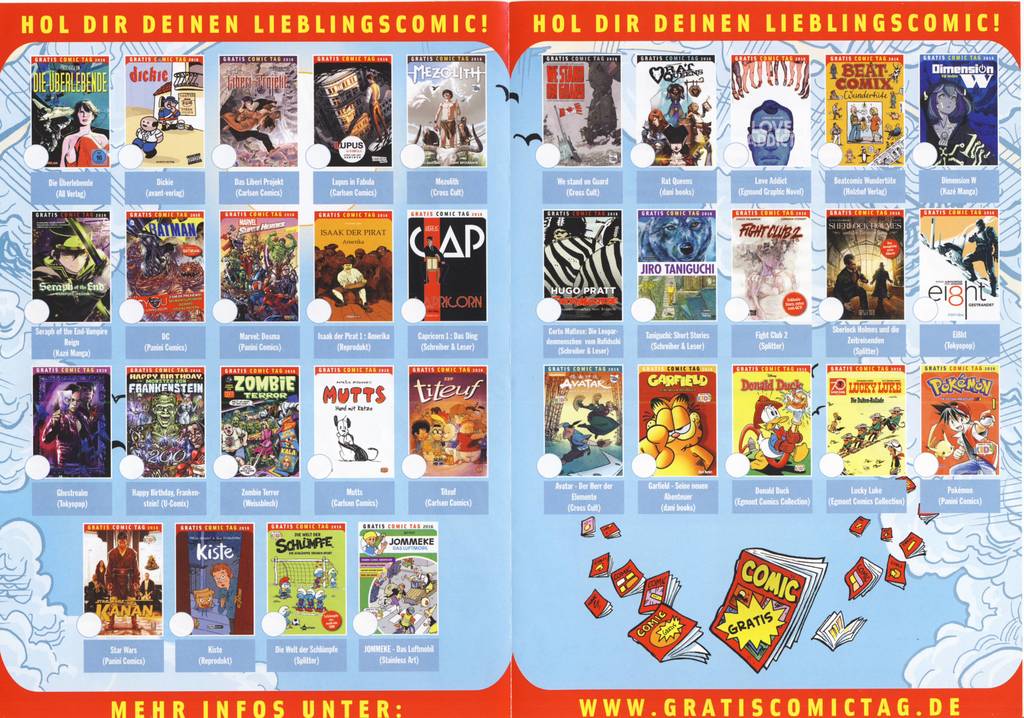 I'm surprised by how many have titles in English (and by some of the licensed properties). Some were familiar to me and of interest (Corto Maltese, Isaac the Pirate), and others were familiar but not of much interest. But there's a lot of title there I don't know, and I want to!

The people in Germany almost all speak English.

Anecdotally, when I was there, I was sitting at the bar of a restaurant, and I tried to ask for a menu in German. The guy said plainly, "Please just speak in English."

That they all speak English may be an overstatement, but it's true of most European countries, especially in big cities. I find they like when I try to speak the language, but they quickly realize that however much English they know is more than I know of their language. Although I've been in touristy places around major sites where nobody spoke English at all, so I can't just assume it'll work.

In Paris, I'd gone out of my way to learn a lot of food words so I could order off a menu with some confidence, and the waiter immediately came up to the table and handed us English menus. Something tipped him off.

I imagine the interiors are in German, and titles like Garfield and Sherlock Holmes are their names in any language. I wouldn't have thought Mutts was so popular it would be a featured title, but it's not a hard strip to convey in any language.

I'm not so much surprised by all the stuff I knew--I've been in German comic book stores, and the bulk of the ones I've seen are filled with American comics. I'm more surprised by the amount of stuff I don't know that hasn't been translated into English. I'd think there'd be a market for that.

And yes, ED, Beat Comix struck me, too. They set a high bar in trying to look like Zap Comix. I do wonder if the contents lives up to their influences. I couldn't find much info about it online, it looks to be a sampler made up for the day rather than a slimmed down regular title.

I wonder how many other countries have free comic book day?

"Something tipped him off."

In a Metro station in Paris, there was a busker playing improv harmonica. When I walked by, right in front of him, he played two bars of "An American in Paris." I whipped my head around and he went right back to what he was playing.

I always like on travel boards when people ask what shoes to wear so they don't look like tourists (only Americans wear ball caps and sneakers!). Besides the fact that they're hanging out at tourist sites often with a camera, it's their haircut, glasses, cut of pants and a billion things besides the shoes they have on. It's hard to hide.

Lee Houston, Junior replied to Steve W's discussion A Cover a Day
"Here's one roller coaster I think my cardiologist would still let me ride, provided I could…"
10 minutes ago

Jeff of Earth-J replied to Jeff of Earth-J's discussion Swamp Thing
"ISSUE #119: Tefé is taken by the "bad man" to her "new home" where…"
50 minutes ago

Jeff of Earth-J replied to The Baron's discussion Movies I Have Seen Lately
"OTOH, if Connery had stuck around, Cubby Broccoli might not have tried the "back to…"
57 minutes ago

Peter Wrexham replied to Steve W's discussion A Cover a Day
"More carousels or merry-go-rounds, showing that what goes around comes around.  Alternatively,…"
3 hours ago