While in the midst of her fantastic 6-issue team-up with Power Girl (concludes November 2015), Harley is gearing up to meet (and almost certainly annoy) the greatest heroes and villains of the DC Universe!

First up: The incredible Wonder Woman! Written by Amanda Conner and Jimmy Palmiotti with art by Amanda Conner (and a bunch of people who owe her favors), HARLEY’S LITTLE BLACK BOOK #1 hits shelves on December 2, 2015.

But that’s just the tip of this Arkham-sized iceberg! HARLEY’S LITTLE BLACK BOOK will also tie into DC Entertainment’s ongoing monthly themed variant cover program with variants for 10 of DC Comics’ most popular titles. December’s variant cover theme will be HARLEY’S LITTLE BLACK BOOK, illustrated by a murderer’s row of the industry’s most talented artists. This unprecedented collection of comics will feature more than one open-to-order variant cover per title, all of which will be shipped in opaque black polybags.

For now, we’re going to let the artists themselves steal the show. But rest assured, Harley won’t let the spotlight off of herself for long!

These HARLEY’S LITTLE BLACK BOOK variants are the latest in a variety of monthly themes. 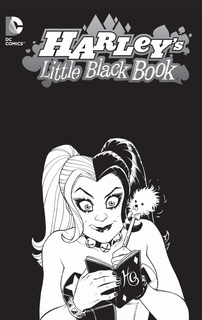 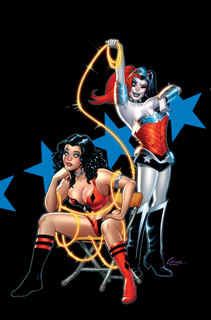 I was hoping they were going to call it "The Brave and The Bold, this Ain't" ;)

The Naughty and the Nuts!

Instead of just your normal team up, how about "Harley Quinn Pranks the DC Universe". I can just see what happens when she pranks Mera (with Aquaman's help), pretending he was out of the water for 1:01.