I'm wondering why we haven't heard more from these characters since either the New 52, or shortly after. I think there has to be more content out there for these characters...

Blue Beetle (come on, quit teasing...Ted Kord can be Blue Beetle too...)

Fire (she's still out there, right?)

Checkmate (characters are too cool not to use)

Rocket Reds (come on, with the current climate? It writes itself!)

The New Guardians (I have never understood how these characters are in limbo...)

Jade and Obsidian (okay...how about the JSA?)

Halo (new Outsiders series on the way...make sure she's a part)

I'm with Randy -- just because I like Ted Kord doesn't mean I have anything against Jaime Reyes. He's a young, non-sidekick, non-team character, which is pretty rare. AND he has a great visual. AND one of the more fleshed-out supporting casts of any modern superhero creation. I think it's more important to have him around the DCU than Ted, much as I like them both.

If I were to rank my interest in Blue Beetles, it would be:

Seriously, the Dan Garrett love is inexplicable to me. I guess it's because I've only read him in lackluster flashbacks and origin stories.

I don't love Dan Garrett, and I'm the only poster on this thread who might have said something that could be interpreted that way. I do want to read all his pre-Ditko stories, though, because I'm a comics writer-cum-historian and I want to KNOW!

I don't want any new Garrett stories. And I don't necessarily want him as part of DC's World War II history, although I did get a charge when I saw him there. He also appeared in a Justice League story where the 1950s heroes were in some sort of alien prison on Earth, although mainly in the background. (I think it was JLA: Year One, but it might have been Justice League: Incarnations. It's hard to keep track of all the JLA origins that aren't in continuity any more.) Anyway, I wouldn't mind if he was officially part of DC's past. But I don't need to see any new stories.

I checked his Wiki, and he had a long run at Fox/Holyoke. He ran in all 31 issues of Mystery Men Comics (where he debuted), as well a solo title that ran 60 issues, 1939-50. (Although he was just a host in the later years.) He had his own radio show and comic strip, too, so he was no piker. 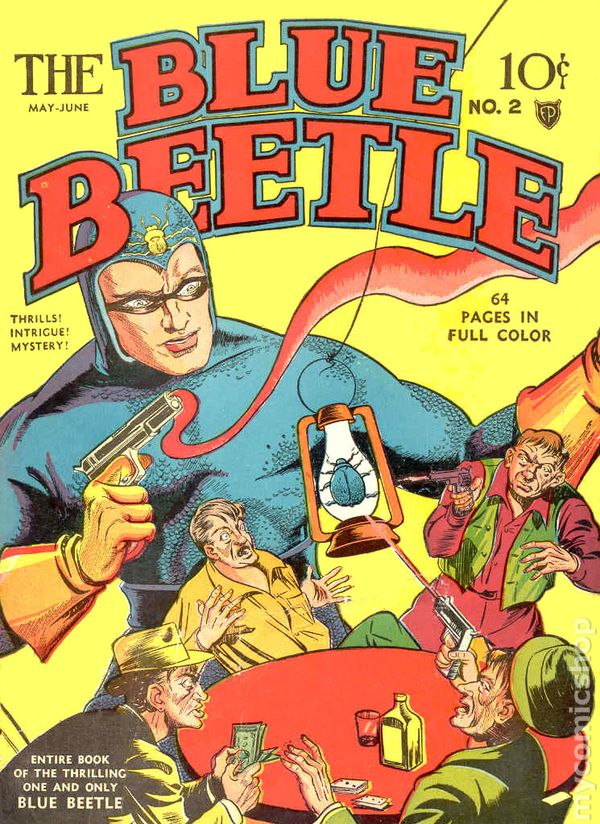 Charlton picked him up and ran a second series, a four-issue series in 1955 that was entirely reprints from Fox/Holyoke (Blue Beetle #18-21, picking up the numbering from some other title). For years I thought that was new material, because the Li'l Capn somehow got the idea that Beetle didn't get his scarab until his Charlton appearances, and he was clearly flying on the covers to those 1955 issues (which were very nice). But the Wiki tells me those were reprints, so he must've traded the bulletproof shirt and vitamin 2-X* for the scarab in the Fox years. 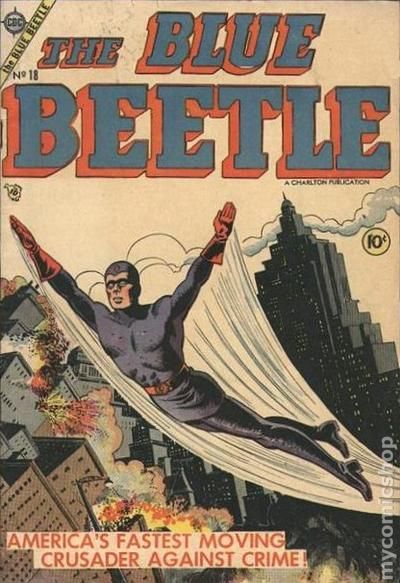 New stories began in 1964 with a third series, Blue Beetle #1-5. That's where my collection picks up, although I'm missing issue #2. Some of the covers were nice, and Beetle had a striking costume -- unlike most contemporaries, he didn't wear boxing trunks over his leotards, which was actually a full blue bodysuit. And he had goggles that looked like (and pre-dated) Goliath's shades in Silver Age Avengers. The insides were fairly mediocre. A fourth series followed, Blue Beetle #50-54 (again, picking up some previous series numbering). It had mediocre covers to match the interiors, but I have all of them anyway. 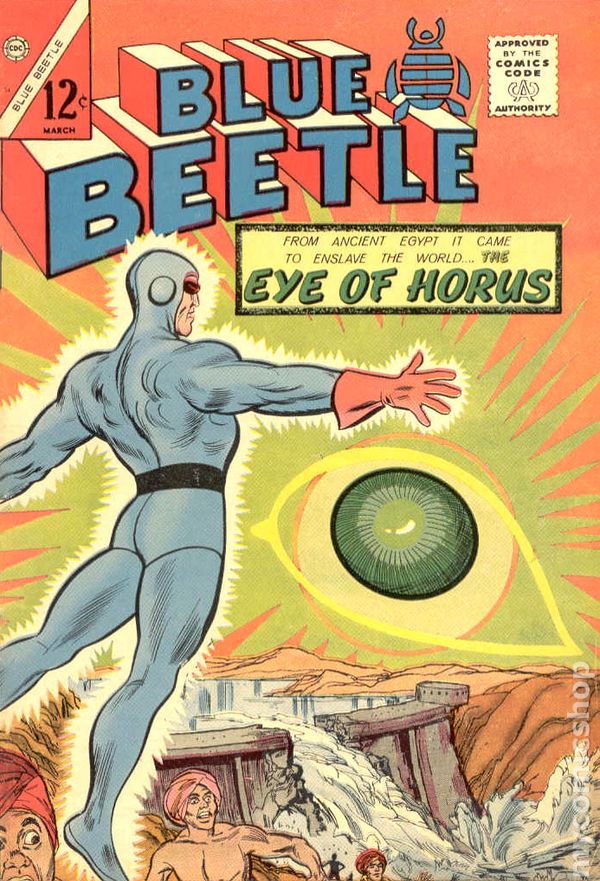 A fifth (and last series at Charlton) starred Ted Kord, running five issues with new numbering in 1967. This was Dikto's run, but the character actually started as a back-up in Captain Atom. After that, Kord moved to DC, where he was eventually supplanted by Jaime Reyes. 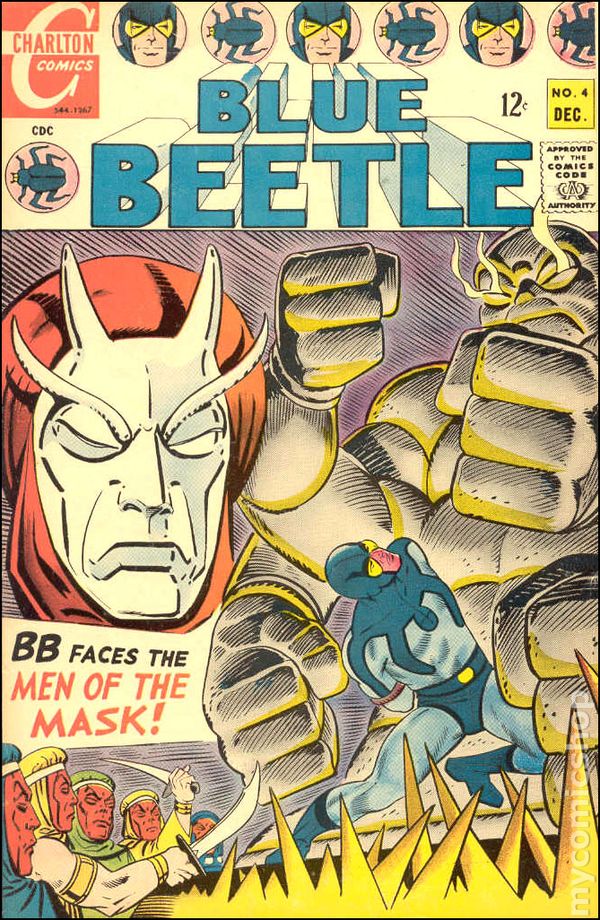 I don't have all of the Ditko Beetle, but his run on the character is available in its entirety in DC's Action Heroes Archives, so I've read them. What I haven't read is the bulk of the pre-Ditko Beetle, who was an important character in comics history. Yet I now next to nothing about him, so I want to fix that. That's not "love" for Garrett, it's just curiosity, and a reprint of some of those 1940s stories is all I want.

Incidentally, my first car was a 1969 VW Beetle, which I loved more than Dan Garrett.

If you can find it the Blue Beetle Companion might fill in a few gaps. 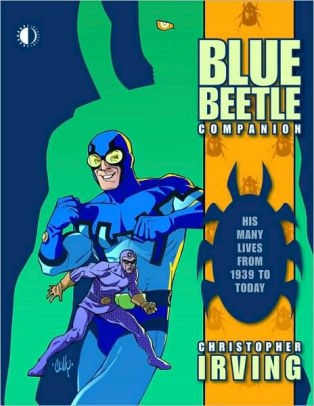 There are a few post-Silver Age appearances before he ended up at DC.

The story that would have appeared in BB #6 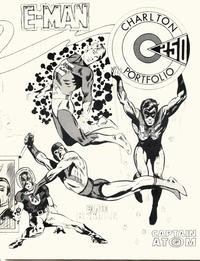 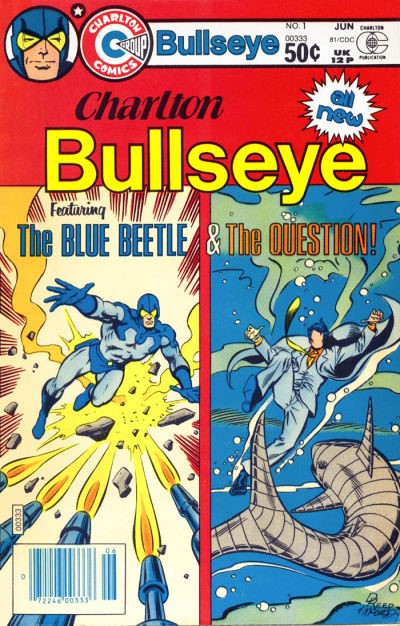 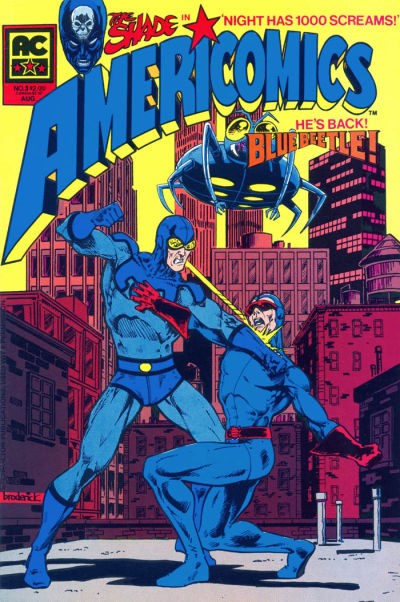 I am kind of surprised we didn't get many "Dan mentoring Ted" stories. Not that I'm clamoring for them, but it would make sense to have a flashback or two.

"That's where my collection picks up, although I'm missing issue #2."

That's the only issue I do have.

"I am kind of surprised we didn't get many 'Dan mentoring Ted' stories."

This is one such story (IIRC).

Ah, OK, Cap -- between your post and CK's mention that he wondered why DC didn't start with Dan, I was sensing an upswelling of love for Garrett that I just could not fathom. I'm curious about him too, a bit. But I think I'd need to have read some more about him to want to know more. He's really just a name and a plot device to me at this point.

Blue Beetle, in his numerous guises, is in select company:  Superheroes published in every decade from the 1930s.  Using cover dates (which pushes, e.g., Flash and Hawkman into the 1940s) there aren't too many.  Superman, Batman, Human Torch, Sub-Mariner, and Doll Man (if we count I.W./Super in the 1960s) (and I'm assuming he's popped up often enough since the Earth X/JLA story to make every decade since).  There's been a Captain Marvel, often unrelated to the others, in every decade as well.  Did I miss anybody?

I assumed they started with Ted because A) he was the most current version, and most importantly B) he was created by Steve Ditko. The first story starring Dan Garret -- that was the original spelling -- doesn't have a writer attached, although it's rumored Will Eisner had something to do with it. Still, I can see DC wanting to cash in on Ditko's name.

Also, when they first appeared in Crisis, wasn't their Charlton continuity assumed to be intact? It was only after Crisis, when their world was folding into all the other earths, that they experienced the continuity changes. So Kord would have already been the Blue Beetle when that happened.

ClarkKent_DC replied to Steve W's discussion A Cover a Day
"Continuing on ... Jonah Hex graduated to his own series, titled Jonah Hex of course (March-April…"
3 hours ago

ClarkKent_DC replied to Steve W's discussion A Cover a Day
"Another case of retitling but not renumbering: All-Star Western #1 (August-September 1970) Final…"
3 hours ago

The Baron replied to The Baron's discussion The List of 870 Super-Heroines
"I'm not against "duplicates", per se, I've got three "Storms" onnthe…"
5 hours ago

JD DeLuzio replied to Alan M.'s discussion So, What Are You Reading These Days? (besides comics)
"Eric Choi's Just Like Being There-- Hard SF from the award-winning author and aerospace…"
6 hours ago

Travis Herrick (Modular Mod) replied to Alan M.'s discussion So, What Are You Reading These Days? (besides comics)
"They do explain why they didn't choose Sgt. Rock, though. It was also, supposed to be out…"
7 hours ago

Jeff of Earth-J replied to Steve W's discussion A Cover a Day
"Moving to a new volume is like losing one's virginity: once it's done, there's no…"
9 hours ago

Jeff of Earth-J replied to PowerBook Pete, the Mad Mod's discussion Anything, Everything, or Nothing At All
"I think the term "comic book industry" is an oxymoron. I always say "comic book…"
9 hours ago

Dave Palmer replied to PowerBook Pete, the Mad Mod's discussion Anything, Everything, or Nothing At All
"Some perspective on the size of the comic book industry.  On the radio today I heard that in…"
10 hours ago