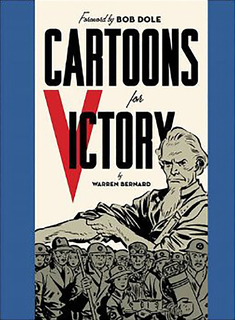 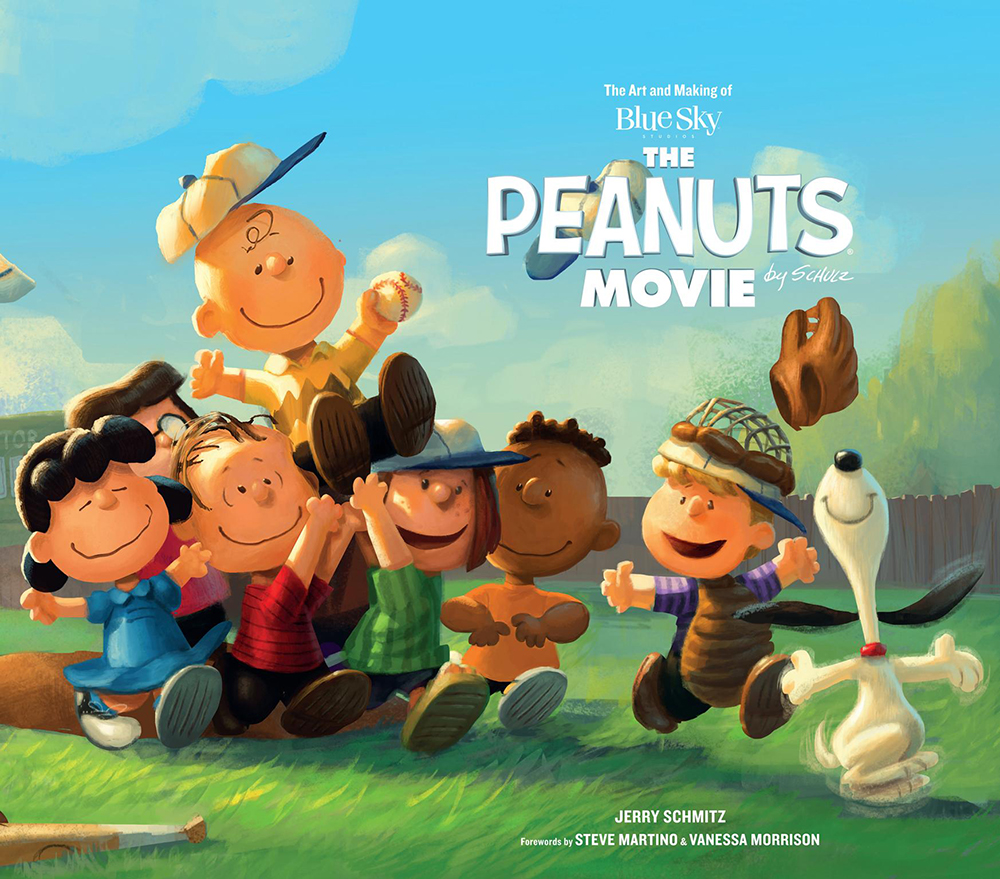 The Art and Making of The Peanuts Movie, by Jerry Schmidtz, $34.95, Titan Books 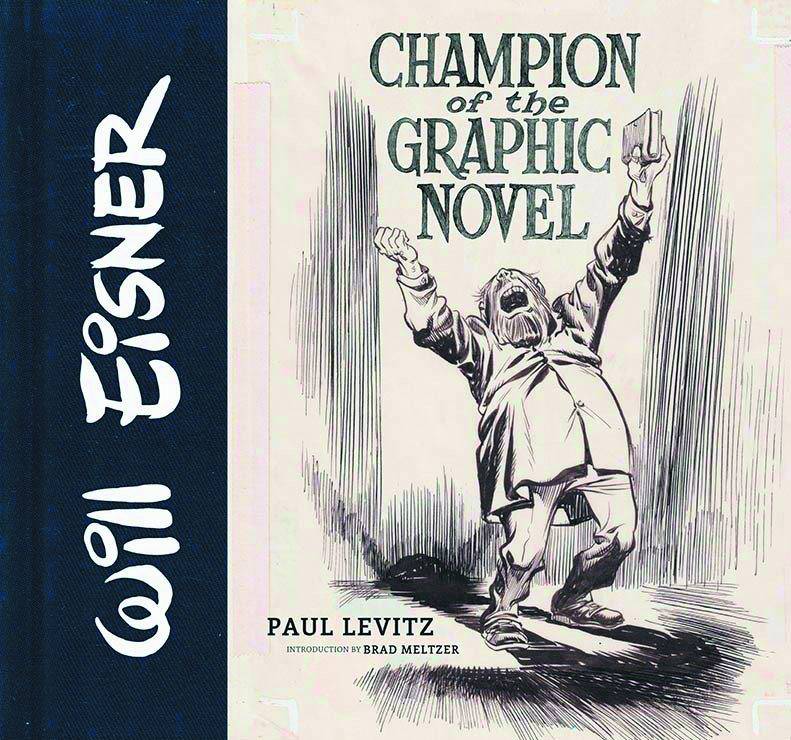 Will Eisner: Champion of the Graphic Novel, by Paul Levitz, $40.00, Abrams ComicArts.

The holiday season is always an opportunity for publishers to offer high-end books that cost a little more than your average graphic novel. This year’s crop is pretty robust.

Top of my list, almost surprisingly, is Cartoons for Victory by Warren Bernard ($34.99, Fantagraphics Books). What could have been an ordinary collection of World War II-era political cartoons is instead a fascinating history lesson that breaks through boundaries between media. Cartoons for Victory includes political cartoons, sure, but also comic books, advertising, posters, comic strips, magazine covers, civilian defense manuals – just about anything where ink hit paper from 1941 to 1945.

The result is an overview of news, politics and daily life in wartime America that is more informative than the history books that expressly explore that material. From the foreword, by former senator and presidential candidate Bob Dole, to the last few pages, devoted to the wartime propaganda and training manuals of the legendary Will Eisner, Bernard provides explanation and insight to the home lives of the Americans who made the U.S. the “arsenal of democracy.”

Ever wondered how rationing worked? Where Rosie the Riveter came from? How war bonds and stamps helped the war effort, how much they cost and what the reward was when redeemed? Why schools ran paper drives? What the WACs, WAVEs, WAFs and WASPs did? How the black market worked? What a zoot suit was, and who wore them? How African-Americans contributed, despite Jim Crow? Whether or not blackouts were taken seriously? Who planted victory gardens, and why?

These questions and more are answered in lively prose at the beginning of each chapter, followed by examples from all sorts of media that flesh out the idea in one’s mind. It’s almost possible to imagine life during wartime – or, at least, life for an avid reader during wartime.

Bernard wraps up his book with a chapter devoted to some famous names – not just Eisner, but also Al Jaffee, Hank Ketcham, Harvey Kurtzman, Bill Mauldin and Robert Osborn. Cartoons for Victory was such a delight that the only way to make it better would be to make it longer.

Another history book of sorts is King of the Comics: 100 Years of King Features ($49.99, IDW Publishing), celebrating the centennial of one of the first and most famous national comics syndicates. King Features was established by William Randolph Hearst, and its history is also the history of the American comic strip, from R. F. Outcault’s seminal “The Yellow Kid” to the comics of today, like “Curtis” and “Zits.”

King reprints bits of comic strips chronologically, separated into eight chapters led with historical essays by eight different writers. Some of the strips are among the most famous, such as “Blondie,” “Beetle Bailey,” “The Katzenjammer Kids,” “Krazy Kat,” “Mary Worth,” “Mutt and Jeff,” “The Phantom,” “Popeye” (nee “Thimble Theater”), “Prince Valiant” and “Steve Canyon.” But there are plenty of lesser-known strips as well, like “And Her Name Was Maud” (about a donkey), “Dauntless Durham of the U.S.A.” and “Merely Margy.” Some are fascinating for what they say about their times, and some are fascinating because it’s hard to imagine a time or place where they’d be considered funny.

Unfortunately, there’s a lot more of the oddball strips than the famous ones. And there isn’t enough of any one strip to really get a full taste. But King can serve as both entertainment and reference, so it’s a two-fer.

Meanwhile, with The Peanuts Movie still in theaters, the work of Charles M. Schulz is getting a lot more attention than usual – and it always gets a lot of attention.

As opposed to many previous “Peanuts” cartoons, the new animated movie features Schulz’s crew in three dimensions. It’s helpful that the lead character is is somewhat geometric – he is “that round-headed kid,” after all – but turning 2D Peanuts into 3D Peanuts is a lot harder than it looks. Schmitz devotes a chapter to each major character – the analysis, the planning, the sculpting. Then there are chapters on the environments, such as Charlie Brown’s neighborhood and Snoopy’s rich fantasy life.

Needless to say, the creators of the movie not only had to come up with animation-viable characters and sets, but also had to compete with the memories of generations of “Peanuts” fans. Any variation from what “Sparky” Schulz invented, either in tone or style, would be met with howls of outrage – or worse, bad word of mouth for the movie.

I’m not much of a fan of how-the-sausages-are-made books, because I’d really rather not know. All I care about is the end product, and I don’t want any distractions from that. But as “sausage” books go, this one is informative – and very pretty.

More inventive than pretty is a coffee-table book designed by the award-winning Chip Kidd to celebrate the 65th anniversary of the comic strip. Only What’s Necessary: Charles M. Schulz and the Art of Peanuts ($40.00, Abrams ComicArts) focuses on Schulz and his creative process during the life of “Peanuts,” 1950 to 2000.

The book includes a lot of original strips, plus doodles, sketches, unpublished work and more from the  Charles M. Schulz Museum and Research Center in Santa Rosa, California. Since 17,897 strips were published, there’s a lot of ancillary material to be had.

Included, for example, are a couple of strips where Schulz depicted adults. (Well, their legs, anyway.) According to the book, Schulz considered the approach a failed experiment, and the strips were never published. Also included are examples of Schulz’ other comic strips, some published, some not.

Unfortunately, the bulk of the book is made up of published “Peanuts” strips (presented in arty fashion), which are available elsewhere. (Fantagraphics is publishing “The Complete Peanuts,” which reprints the entire canon in chronological order, and BOOM! Studios publishes a monthly reprint comic book.) But Kidd’s outstanding design makes everything look interesting even when it’s not new, plus the book includes comments and insight from Jean Schulz (Sparky’s widow), Karen Johnson (director of the research center) and Paige Braddock (creative director at Charles M. Schulz Creative Associates).

Speaking of Abrams and creative geniuses, the publisher has also released Will Eisner: Champion of the Graphic Novel ($40.00). This book is a comprehensive look at one of the founding fathers of comic books, a creator who wrote and drew arguably the best comic strip in the world (“The Spirit”), an artist who pioneered endlessly creative methods of shading and rendering, a businessman who pushed the boundaries of comics publishing and, finally, the visionary who is generally credited with creating the graphic novel. (He didn’t – the origins of the form are murky – but he was definitely an early adopter and powerful proselytizer.)

This book doesn’t have the Kidd touch, but it has something better: It was written by Paul Levitz, the president and publisher of DC Comics for much of my adult life. Levitz knows his bones, especially when it comes to comics history, and includes comments from the likes of Jules Feiffer, Neil Gaiman, Denis Kitchen (founder of Kitchen Sink Press), Scott McCloud (Understanding Comics)  and Art Spiegelman (Maus). This book is a must for any fan of Eisner, graphic novels, comics history or The Spirit, a character enjoying his 75th anniversary.