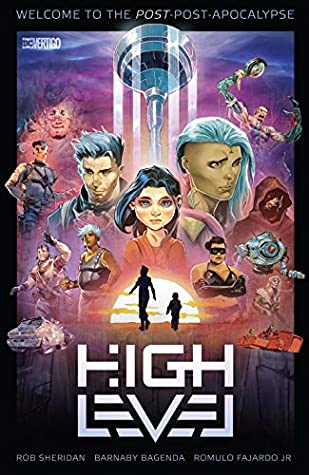 High Level is set in a world hundreds of years after the big apocalyptic event (no dates are given), with the motto"Welcome to the Post-Post-Apocalypse." It is a now-familiar desolate place, with residents relying upon scavenging for many of their needs. At least that's the case down south, where protagonist Thirteen makes her living smuggling, and belongs to a community called the Ordell Faire. High Level is up north: a mythical place, thought to be a place of plenty, with a religious angle. Travelers go there to find Ascension, and no one has ever returned from there to tell of it.

All very reminiscent of the Mad Max movies, including the cybernetically enhanced humans. Thirteen runs afoul of a cult of them early on, but is rescued by Black Helix, a rebel force fighting against the powers in High Level. So this post-apocalypse does still have a bit of quasi-political organization. She accepts a job to transport a child messiah named Minnow back to High Level. The idea is that she will be able to fly under the radar (no one in the North knows her), but of course things are not that simple. But it's not all serious: I especially enjoyed the whimsy of flocks of flying drones (clearly modeled on our contemporary version).

It turns into a classic chase story, and Thirteen becomes separated from Minnow. When they finally reach their destination, they find a whole society in Low Level working to Ascend to High Level. Ascension may have been a myth all along. Thirteen is admitted to High Level, but finds it deserted. And a figure called the Red King tells her that he is responsible for all the deaths she just saw, and is on a higher level. She sets off to find him, with the final note "End of Book One."

With Barnaby Bagenda Vertigo again went outside of the world of comics for the writer. He was the long-time art director for the band Nine Inch Nails (including the scripting of their alternate reality game Year Zero), but this was debut writing comics. Artist Barnaby Bagenda is best known for DC's The Omega Men, as well as other DC titles. His style is more high fantasy than science fiction, which suits the tone of the book (despite the apocalyptic setting). The collection even includes a map, another fantasy hallmark, and a High Level Encyclopedia. Heavy world-building here, which was clearly intended to establish a much longer run than six issues (this again was originally announced as an ongoing title). While on one level this is a quality series which ends the run of Vertigo miniseries on a high note, it is frustrating that the ending is so inconclusive. Like Hex Wives it is a first chapter, but in this case it is much less self-contained.

When I began this Vertigo Miniseries Tour (and this blog) I never even entertained the notion that it might have a fixed ending. But here we are: the last Vertigo miniseries,  barring some later rebirth of the imprint. Fortunately the imprint helped make possible a wide variety of creator-owned comics that are flourishing with many other publishers, large and small. Kickstarter is coming on strong as a major force enabling that work as well. Lots of stuff to read, although I have to say that the tempo of the story telling in a classic Vertigo miniseries is still a special thing that is hard to replicate in any of the contemporary formats.

I didn't even make it as far into this as I did High Level. I found it to be just a formulaic series I bailed after one, but I was still committed though issue 3. I think because Vertigo has such high quality series, I am harsher when a new one comes out, and more apt to pull the plug when it disappoints.

Travis, I think you mean Hex Wives? That was the previous series I reviewed recently. I guess I cut High Level more slack for formula well executed than you did. I did like Hex Wives better.