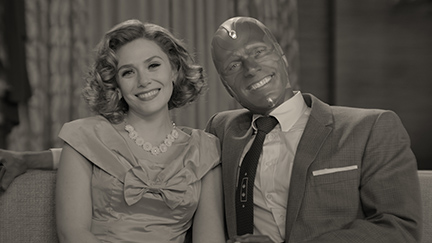 Elizabeth Olsen (left) and Paul Bettany star in WandaVision on Disney+, which stars the two Avengers in an inexplicable sitcom milieu. (Courtesy Disney)

“But wait,” I hear you say. “Aren’t there nine terrific SF/fantasy/superhero shows that are on their last seasons in the coming year? Not just shows that have reached a natural end, like The Walking Dead and The Walking Dead: World Beyond, but shows killed in their prime, like Black Lightning, The Expanse, His Dark Materials, Lost in Space, Lucifer, Supergirl and Van Helsing? Are genre shows proving too expensive to make, as we have always feared?”

I count more than 30 SF/fantasy/superhero series that will continue in 2021, from American Gods (season 3, Starz) to The Witcher (season 2, Netflix). And you can’t tell me those shows aren’t expensive to produce. Ditto For All Mankind (Prime), Raised by Wolves (HBO Max), the various Star Trek shows (CBS All Access) and many others.

And as much as I’d like to rhapsodize about all the shows whose return I eagerly await, some of which aren’t even genre shows (Peaky Blinders! Perry Mason!), more pressing are all the new programs I’m adding to my Watch List. With the understanding that premiere dates may change, let’s look at how I’m going to spend a lot of time in 2021:

The Book of Boba Fett (Disney+, December): Spinning out of The Mandalorian, the hard-bitten, beskar-wearing bounty hunter (Temuera Morrison) and sidekick Fennec Shand (Ming-Na Wen) have taken over Jabba the Hutt’s criminal empire from Bib Fortuna. If, like me, all those names and terms are as familiar to you as your own family, this is your jam.

Cowboy Bebop (Netflix, TBD): John Cho (Lt. Sulu in the recent Star Trek movies) stars as Spike Spiegel in this live-action adaptation of a surprisingly deep anime. Spike is one of the bounty hunters, called “cowboys,” who track criminals in a future where Earth is largely uninhabitable and humanity has colonized the planets, moons, asteroids and other large rocks of the solar system. Expect a generous mix of themes and genres.

Foundation (Apple TV+, TBD): Jared Harris (Chernobyl) stars as mathematician Hari Seldon, whose “psychohistory” can predict the future in broad strokes, bringing him into conflict with the Galactic Empire whose demise Seldon foresees. Adapted from the award-winning trilogy by SF legend Isaac Asimov. 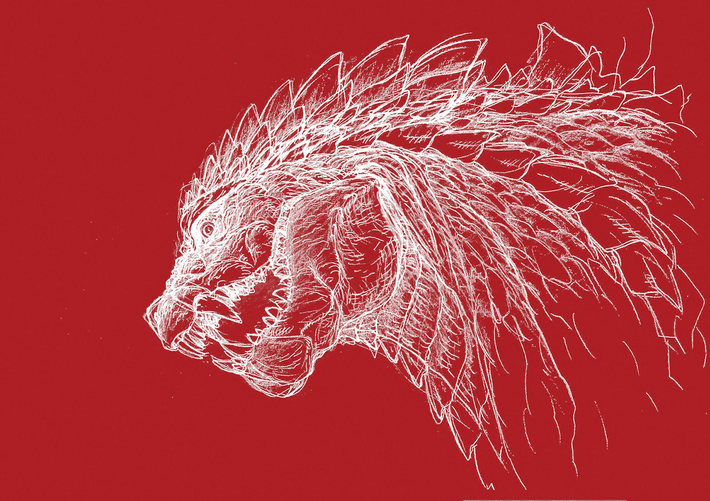 Godzilla: Singular Point (Netflix, TBD): Anime starring the Big G. That’s all I know, and that’s all I need to know.

Halo (Showtime, TBD): Based on the crazy-popular video game, Halo stars Pablo Schreiber (American Gods) as Master Chief, an Army-built super-soldier, and Natascha McElhone as artificial intelligence Cortana, as they blow away aliens. I assume there will be a little more to it than that.

Invincible (Prime, TBD): In this adult Amazon animated series, Mark “Invincible” Grayson (Steven Yeun) is the super-powered son of Omni-Man (J.K. Simmons), Earth’s greatest hero. Warning: All is not as it seems. Based on the Image Comics series.

Loki (Disney+, Spring): An other-dimensional version of Marvel’s Norse trickster god (Tom Hiddleston) replaces our own, who was killed by Thanos. That raises the ire of the Time Variance Authority (from Fantastic Four comics), which frowns upon such shenanigans.

Lord of the Rings (Prime, TBD): Wait, didn’t we already have, like, nine hours of movies telling this story? Yes, yes, we did! So this series is a prequel, set in the Second Age of Middle-Earth, when Sauron was still a young and carefree bloodthirsty monster.

Ms. Marvel (Disney+, TBD): Iman Vellani stars as Pakistani-American Kamala Khan, a typical 13-year-old Jersey girl who dreams of being a superhero like her idol Captain Marvel — and then gains the shapeshifting powers to become one. Based on the Marvel Comics series.

The Nevers (HBO, Summer): A series featuring a group of Victorian Era women who develop super-powers. It’s by Joss Whedon, who created Buffy the Vampire Hunter and directed Avengers, so toss in Ripper Street and you get the idea.

Paper Girls (Prime, TBD): Four 12-year-old girls who deliver newspapers in the 1980s get caught up in time-traveling adventures. Adapted from the Image Comics series.

Peacemaker (HBO Max, TBD): John Cena stars as a man who loves peace so much he’s willing to kill for it. Is he nuts? This is the Charlton Comics character Alan Moore based The Comedian on in Watchmen, so draw your own conclusions. Created by James Gunn, Peacemaker is a spinoff from the upcoming The Suicide Squad, which Gunn directed.

Resident Alien (Syfy, Jan. 27): In this adaptation of the Dark Horse comic book, American treasure Alan Tudyk (Doom Patrol, Powerless) stars as the titular character, a space alien who disguises himself as an Earthling doctor after a crash landing. High-jinks ensue.

Shadow and Bone (Netflix, April): Based on the Leigh Bardugo series of books, a teenage girl discovers she has magical powers in a world inhabited by flesh-eating creatures.

Star Trek: Prodigy (Nickelodeon, TBD): Kate Mulgrew returns as Kathryn Janeway — well, at least her voice does — in this animated show. Janeway has to deal with, and presumably mentor, a group of delinquent teens who swipe a derelict Starfleet vessel.

Star Wars: The Bad Batch (Disney+, TBD): This computer-animated series is a sequel to the animated Star Wars: The Clone Wars, and features clones who each develop a unique super-power.

Star Wars: Visions (Disney+, TBD): Another anime series, this one is an anthology of short films set anywhere in the time- and space-spanning Star Wars universe. I see a lot of Googling in my future. 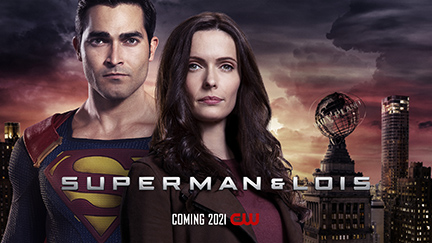 Tyler Hoechlin (above) and Elizabeth Tulloch will play the leads on Superman & Lois, spinning off “Supergirl” in The CW’s Arrrowverse. (Courtesy CW)Superman & Lois (CW, Feb. 23): Spinning off from the soon-to-end Supergirl, Tyler Hoechlin and Elizabeth Tulloch reprise their roles as the Man of Steel and the Daily Planet’s star reporter, now as new parents, in Smallville, Kansas. Emmanuelle Chriqui plays Lana Lang, which raises all sorts of possibilities in my comic-book-encyclopedia head.

WandaVision (Disney+, Jan. 15): The early reviews are ecstatic about this series, starring Elizabeth Olsen as Avenger Wanda “Scarlet Witch” Maximoff and Paul Bettany as the mysteriously resurrected Vision in 1950s and‘60s sitcoms. They are ecstatic, as I said, but also confused. Believe me, if you had read the comics I’ve read starring these two, you would just nod your head, calmly buckle your seat belt and wait for the inevitable other shoe to drop.

The Watch (Prime, TBD): Early reviews say that this adaptation of Terry Pratchett’s Discworld novels veers significantly from its source material. The rough outlines are still there, though, as it stars Richard Dormer (“Game of Thrones”) as a grizzled policeman in a mish-mash of worlds where various alien races, magic, super-science and strange physics all co-exist.

Y: The Last Man (FX, TBD): A pandemic kills every living thing on Earth with a Y chromosome — except for twentysomething Yorick Brown and his pet monkey, Ampersand. Yorick was practicing for a career as an escape artist, which comes in handy when a world full of women are all after him, to discover why he survived, or to perform scientific experiments, or to expiate their anger on all the men who mistreated them or, of course, to breed. Based on the Vertigo comic book by Brian K. Vaughn, who also created “Paper Girls” above.

That’s a lot of shows, but don’t worry about me. I can handle it. I’ll just give up sleep, that’s all.

The mention of Lucifer ending is premature.

After the second half of season 5 drops we can look forward to a season 6, which has already been green-lighted. Season 6 will be the last season. Netflix confirmed this three weeks ago.

Episode 5 of The Watch will be airing tomorrow (January 31) on BBC America. Check local listings for time and channel. Enjoyment of the series depends upon how close/faithful to the original source material (Pratchett's Disc World novels) you want it to be. If you take the show on its own merits, in my opinion Episode 1 got bogged down in set up and exposition, but the series considerably picks up steam and keeps going from the middle of Episode 2 onward.

Looking forward to Superman and Lois. The Godzilla anime and Cowboy Bebop revival sound interesting, but I don't subscribe to any streaming services, so I'll have to wait until they make it to more traditional outlets, like the first season of Star Trek: Discovery did on CBS.

But is Bebop a reboot, a revival, or what? Considering how the original's finale ("The Real Folks Blues", parts 1 and 2) ended...

"Looking forward to Superman and Lois."

At least Superman gets top billing this time.

Re: Lucifer. Season 6 as the last season is what I was referring to. SIx seasons is a lot, I guess, but too few for me.

Re: Cowboy Bebop. This is a live-action adaptation of the anime, so presumably will follow the same general storyline. If the ratings are poor, they will probably use that finale!

Re: Superman and Lois. So, Clark and Lois settle in Smallville to raise their two sons ... who are both teenagers. (I guess time in Argo City passes faster.) That's a strange set-up. There have been some comics scenarios that can be mined for the show, such as those involving Clark, Lois and Jon living in Smallville; Bob Haney's Super Sons; the current Super Sons (both are at least 13 now); Kurt Busiek's Secret Identity; John Byrne's Generations; some Imaginary Stories; and robably more I'm not thinking of. The wild card for me is Lana Lang. What could her purpose possibly be? Home-wrecker? Secret identity snoop? Maybe it's a teenage version that will date one or both of the boys.

As a guy who's had a beard for many years, a character with stubble doesn't bother me. However, every time I see Clark/Superman in the promos for the new series I have to wonder how he maintains the stubble.

Must be those old Weisinger books

Re: Superman and Lois. So, Clark and Lois settle in Smallville to raise their two sons ... who are both teenagers. (I guess time in Argo City passes faster.)

It's the way the world re-ordered itself after the last Arrowverse crossover, "Crisis on Infinite Earths."* Before Crisis, Lois and Clark had one baby -- and he was a baby. After, they had teenage twins.

* I still marvel at the thought that the world got a TV adaptation of Crisis on Infinite Earths.