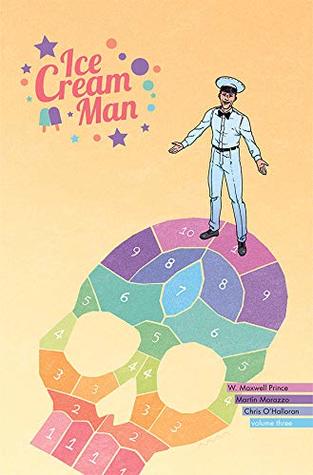 The stories in this volume go deeply into the relationship between the Ice Cream Man and his nemesis, the cowboy Caleb. The first story is a Western that takes place in a dying world, "longer ago than there are numbers to express." It is surreal, but establishes that the pair have a relationship that is apparently ancient. So Caleb's initial appearance earlier in the series was certainly no surprise to the title character. The only question would have been what took him so long! The second story takes place in Mexico, and is almost entirely in Spanish (with translations in the back): the time has jumped forward to 1919. The third installment is a bizarre tale (which looks contemporary). It follows a writer named Will Parson as he jumps from one reality TV show to another. They are a bizarre assortment, which could not possibly be real. But back in reality, Will and Uncle Bob have gone missing... The final story takes place in space, in the future (possibly "sooner than we'd like to admit"), with the pair moving on to the next universe. It's quite a leap from the previous collection, moving from a mysterious local phenomenon to a grand, ageless one. Hard to know what to make of it. I suppose it all depends on where the series goes next.