Mogul's slave, the gigantic Jinni Devil, attacks the Asgardians.  Thor retaliates by hurling his hammer and causing the Jinni great pain.  Hogun warns Thor that it must be he that draws first blood.  He smashes the Jinni with his mace but the monster laughs it off.  He grabs Hogun and threatens to kill him.  Fandral lunges at the Jinni with his sword, ignoring Hogun telling him to stay back.  The jab is painful enough that the Jinni releases the Grim One.

Thor warns his fellow Asgardians that the Jinni is enraged and is about to use his magic powers against them.  His attack staggers them but Hogun tells them not to despair ... "'Twill soon be dark!"

Far below the surface, Mogul is observing the battle on a monitor with some advisors.  He tells them the Jinni has made a fatal mistake by dawdling too long with the Asgardians.  Once the first shadow of nightfall is seen, the temperature changes the body fabric of the Jinni.  That one weakness caused all of the other Jinnis to perish, and Mogul's servant is the last of his race.  Mogul remains unconcerned, even if the Jinni fails, believing himself to be unbeatable.

Night falls, and the Jinni Devil indeed fades into nothingness when the first shadows appear.  The Asgardians head toward Zanadu to confront Mogul, and Hogun vows to slay his enemy. 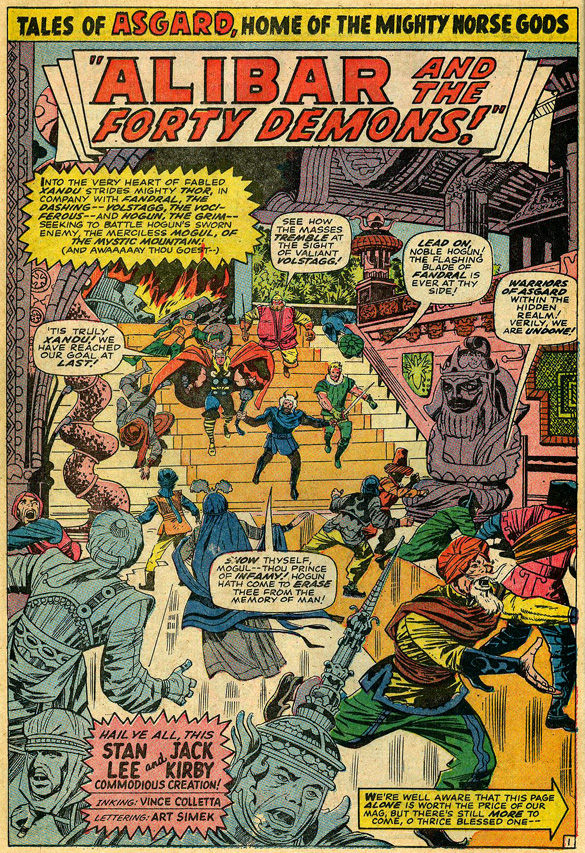 Led by Hogun, the Asgardians storm Mogul's kingdom.  Mogul's subjects are terrified and they scatter.  Thor warns that the villain may strike when they least expect, but Hogun vows he will never let down his guard.  Volstagg, meanwhile, sees two men carrying what appears to be a female in a litter chair, and wonders if Mogul is being crafty and hiding within the conveyance.  As his fellows charge forward, Volstagg turns to investigate.

Hogun, Fandral, and Thor soon find themselves confronted by a corps of sword wielding soldiers.  Despite being outnumbered, the Asgardians get the better of their opponents.  At the same moment, Mogul is in his castle, about to sentence Alibar the Thief to death for stealing food from the royal kitchen.  However, he stays the execution to make better use of him.  He knows the Asgardians are close and seek his life and his royal battle standard, and he has a plan.

Mogul grants Alibar a pardon.  Alibar asks him why, but Mogul's only response is to garb him in princely raiment..  He also gives him a steed, saying a warrior must have one.  Alibar still doesn't understand, and Mogul replies that he respects his courage, and wants him to be a knight, to battle the enemies of the realm.  Alibar figures it out - Mogul wants him to fight, and die, in his place, especially after Mogul hands him the battle standard.  Mogul also gives him an army to lead.  It is an army of demons - Satan's Forty Horsemen!  They proclaim death to the Asgardians.  Alibar realizes he is still a slave, that he doesn't lead Satan's Forty, but is merely along for the ride, and that Mogul has doomed all who live!

The story has turned a corner, as Mogul's Jinni Devil is out of the equation, and Mogul's true colors are revealed - he is a coward.  The Asgardians are closing in, and Mogul knows he is doomed unless he does something drastic.  Alibar seems intriguing as soon as he is introduced.  He doesn't even pretend to be grateful to Mogul for sparing him but guesses - correctly - that the tyrant has an ulterior motive.

This chapter is a great display of the character of the Asgardians.  Hogun is completely obsessed with getting to Mogul and won't let anything stop him.  Fandral is laughing in the face of death, demanding Mogul's forces bring him a master swordsman to test his mettle.  Thor takes an uncharacteristic supporting role, backing up the others with his hammer and his fists; however, this is a wise course to take with Hogun being as single-minded as the story has shown him to be.  Volstagg seems obviously taken by a pretty face, but who knows where this will go?

Jack draws some terrifying looking demons.  Satan's Forty Horsemen should make for interesting opponents for our heroes in the next segment.

I agree with your observations. Up until now Mogul's land was spelled "Zanadu." In the Alibar story it is suddenly "Xandu." Stan should have written more notes instead of trying to remember names.

The Captain posted on the source of "Zanadu" p.95. "Xanadu" has its currency to English speakers from the opening the opening of Coleridge's great poem "Kubla Khan", which begins

In Xanadu did Kubla Khan

Where Alph, the sacred river, ran

Through caverns measureless to man

Down to a sunless sea...

Which we have no idea where it will go, since he couldn't remember the rest of it.

After a too long hiatus, this thread is back ... stay tuned! 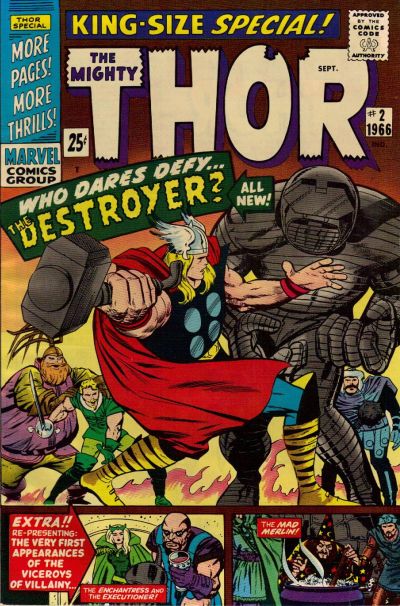 THOR ANNUAL 2 (1966)
"If Asgard Falls .."
Scripted in Solemn Splendor by: STAN LEE
Illustrated in Idealistic Imagery by: JACK KIRBY
Delineated in Delicious Delicacy by: VINCE COLLETTA
Lettered in Living Luminescence by: SAM ROSEN
Unaffected by the Unabashed Utterances of: IRVING FORBUSH
Cover by Jack Kirby and Vince Colletta
---------------------------------------------------------------------------------------------
In Asgard, Odin announces a Tournament of Titans, open to every warrior from every land.  The winner will be awarded a suit of golden armor, proclaiming him a champion of Asgard.  He sends out torch bearers to light the Beacon of the Brave, which can be seen in every corner of the cosmos.  This is seen in a limbo called non-space by Loki and Crusher Creel, the Absorbing Man.  Creel asks Loki what this all means but Loki dismisses him due to what he calls Creel's past failures.  Loki is upset that he can't be in the tournament, as he considers himself the craftiest champion of all.  However, he thinks to himself he will have the final victory due to the power of thought.
Back in Asgard, Thor listens while Odin is reminiscing on his glory days, lamenting that the old must ever give way to the young.  He keeps prattling on, forgetting Thor must stand at attention in his presence.  While Odin rambles, the Warriors Three are at the window, trying to get Thor's attention, so they can go carousing.  Eventually, Odin realizes what is going on and allows Thor to depart.
Thor and friends are discussing the upcoming tourney when suddenly they see a figure being thrown through a tavern window.  They go inside and see a very large man beating up on smaller opponents.  He identifies himself as Brok, and he is accompanied by his brothers Tyr the swordsman, Galp of the Steel Arm, and a troll named Drom, also known as the Spirit Weaver.  They are about to fight when Drom suggests they battle each other at the tournament, where he claims he and his brothers will win the suits of golden armor.  Tyr, Galp, and Brok challenge Fandral, Hogun, and Thor respectively.  Volstagg is almost giddy as he challenges Drom, who retorts:

"Think twice, buffoon!  Perhaps there be one yet smaller than I!"

Great to see you back with this thread John.

Agree with your comments both about this issue and Thor's joi-de-vive in this period  compared to future attitude.

I'm also glad to get back to this thread.

I was struck by the beauty of the top panel on page 10, showing the four heroes facing off against the four, well, jerks. Their very different looks and sizes are very well defined. I've never really understood the objections to Vince Colletta's inks. IMO, he does a great job here.