There's no indication there were ever two different nurses.  The Jane that debuts in JIM 84 is the same Jane throughout the series, as far as I'm concerned.

I've already written about Thor and Loki in the above two threads, in case anyone's interested,  and I have reread the early stories. As for your intriguing observations, here are my opinions and theories, if I may:

I was always under the impression that all of Thor's specific "Thunder God" powers actually came from his hammer, and without it, he was merely the strongest, bravest & toughest of the Asgardian pantheon.  Has Thor (in the comics) ever been shown using any of his thunder/lightning/wind powers (other than super-breath!) without using his hammer?  Even in the actual mythology, it seems to me that it was always Thor's magic hammer that caused the thunder (sometimes, it was his magic goat cart), and he even needed his magic belt of strength to most effectively wield the hammer.

And was the whole issue of Don Blake ever officially settled?  It seems to me that he just went from a worthy mortal who just happened to find a magic stick to a mortal incarnation forced on Thor to teach him humility (and even then, accounts varied as to whether or not Blake was actually born and grew up mortal, or if he simply materialized full-grown at some med school with false memories of a human childhood), then he was a separate mortal who had apparently been left in suspended animation in that cave after he released Thor, who then took over his life, and the last time I looked, he was now a separate mortal who shares space with Thor in the same way that Rick Jones used to with Mar-Vell, with whichever of them that's not manifesting on Earth at the time able to observe and communicate with the one who is.  My brain hurts.

In the Lee/Bernstein/Sinnott story in Journey into Mystery #92 it's a plot point that in Asgard Thor can remain Thor without his hammer. Likewise in the 1966-67 Ulik/Orikal story Sif prevents Thor's transformation by taking him to Asgard or Trollheim.

From Philip's threads, I found links to two Larry Lieber interviews.  For his JIM stories, he wrote a full script from Stan's plots, so Jack didn't do the art Marvel method style.  It's possible that Jack gave Stan some ideas being as he was a fan of the Norse myths.

Jumping way ahead to answer your question, Dave, when Odin finally explained the Don Blake persona (I don't remember in which issue), he stated (IIRC) that Blake was created with fake memories on his first day of medical school. I've always held to that, regardless of whatever tinkering there might have been later.

I'm trying not to take that into account in this thread, as it's more fun to try to address these comics as if I'm coming to them fresh. And, as a lad, I really did puzzle over the whole magic stick business. Since I could read about Thor in books from the library that contained stories written in 1000 A.D., clearly Thor predated Don Blake. And there was no magic stick in the Elder Eddas, and what was with all the stick/hammer tapping? That wasn't in the Eddas, either. It seemed arbitrary to me, especially since the writers of Journey into Mystery weren't always consistent about how many taps did what, or whether any tapping was needed at all.

That didn't stop me from playing Thor in the rain with a croquet mallet, but still.

"Loki is powerless in water" - wow, forty years reading Thor comics, and I don't remember hearing that one before!

Don and Jane are part of a volunteer group that head to San Diablo to provide badly needed medical aid.

Saint Devil? No wonder the country had problems.

And the super-breath panel is a good example of cribbing from Superman.

Wind and air pockets are often storm-related, so a case could be made for a storm-god to have those powers, even though I think they dropped them later.

I can't buy that lightning bolt, even magic ones, would jump-start a volcano.

Thor manages to knock Loki into a river, and Loki is powerless in water.

I guess Loki has to be really, really sure he's safe before taking a shower.

From Philip's threads, I found links to two Larry Lieber interviews. For his JIM stories, he wrote a full script from Stan's plots, so Jack didn't do the art Marvel method style. It's possible that Jack gave Stan some ideas being as he was a fan of the Norse myths.

I think the Marvel Method came into use after Stan became overwhelmed with scripting most of the titles, which was a little later on.

Just wait until the hidden secret of Jane Nelson is the springboard for the NEXT Marvel summertime Big Event !!!!!!!!!!!

There's no indication there were ever two different nurses.  The Jane that debuts in JIM 84 is the same Jane throughout the series, as far as I'm concerned. 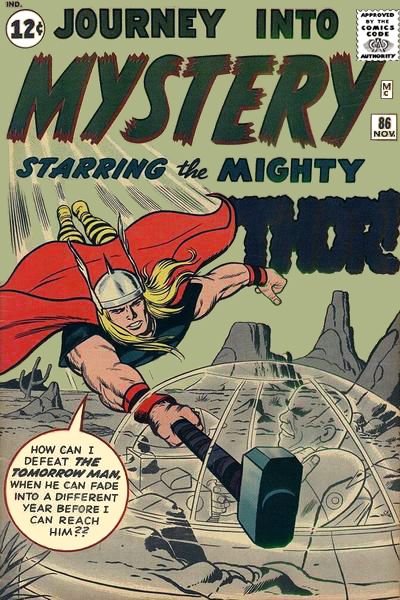 "On The Trail of the Tomorrow Man"

300 years into the future, war and military weapons have been abolished.  An evil scientific genius named Zarrko yearns to conquer the world, and using a time machine he has invented, journeys to the 20th century.  Thor is helping the military test weapons, when Zarrko appears and steals a cobalt bomb under everyone's noses.  A general deduces Zarrko must be from the future, and Thor promises to track him down.  Thor generates a thunderstorm and requests help from Odin - "Behold the plight of thy eldest son"  - and an image of Odin appears.  Odin allows Thor to travel through time and then off-handedly mentions:  "Hast thou forgotten, my son?  Thy hammer has the power to spin faster than light -- to enter the fourth dimension of -- time!"

Thor arrives in 2262 to find that Zarrko already controls the world.  With help from the locals, Thor infiltrates Zarrko's castle.  Zarrko tries to use traps and weapons on Thor, with no success.  He unleashes giant robots, and one grabs Thor's hammer.  Thor defeats the robots before the 60 seconds expires that would cause him to turn back to Don Blake.  Zarrko escapes in a spaceship and threatens to blow up the Earth with the cobalt bomb.  Thor creates a storm, gets the bomb away from Zarrko, and his ship crashes.  He has amnesia, and is no longer a threat.

After the debut of Loki last issue, we now get to meet Odin.  Thor knows how to contact Odin and this is obviously not their first meeting.  And the pseudo Shakespearian dialect is there, from both of them.  Thor must pre-date the events of JIM 83.  So, as Cap said before, what the hell is Don Blake?  There's a lot of truth in the view that they were making this up as they went along, but I think there was a conscious decision made - by the third issue - that Don Blake didn't just become a Thor-like being.  Don Blake somehow inhabits the body of Thor, and Thor's memories - going back centuries - are gradually coming back.  Marvel is going to do their own take on the entire Norse mythology.

I said before that Thor sometimes came across as a poor man's Superman.  Here, not only does Thor have the power to travel through time, he faces an non-powered evil genius who whips out inventions to use against the hero - a bald-headed one, at that!  Poor Zarrko - his origin and motivation gets re-used almost word-for-word for Kang.  Still, even though this new power and new foe seem derivative, it's an entertaining story.  Thor uses his brain and his brawn to beat Zarrko.

We get a moment showing bravery bordering on recklessness; during the military testing, Thor straps himself up to the cobalt bomb.  The bomb is going to be exploded with Thor inches away - he agrees to this because he believes he can survive it, and IF he does, it will provide the military with invaluable information.  Holy cow!  I don't think Steve Rogers is that patriotic!  There's also a funny moment at the end where Don Blake, doing his best Clark Kent, pretends he doesn't read the papers because it's too nerve-wracking!  Jane wishes she could work for Thor (wha?) instead of the "colorless" Dr. Blake.  She's forgotten (at least for the moment) she loves Don Blake.  She's close to Silver Age Lois Lane here.

It's amazing how much time travel went on in the early Marvel Universe: Doctor Doom and Rama-Tut in Fantastic Four, Kang the Conqueror and Immortus in The Avengers and Zarkko the Tomorrow Man here whose kind of the red-headed step-child of the bunch since he's not connected to any of the others.

Thor's memories are returning to him but not completely as Odin has to remind him of his own powers. Strange that he never asks Odin why he has to continue to change back and forth.