I don't have sales figures, but I'd say the fact that Marvel is investing $152 million dollars in making a movie about her means they think that she's popular, and is positioned to be even moreso. And Marvel would be in a position to know more than anyone.

I think she has at least moved from a C-level Marvel character to a B-level in the last 5-10 years. I am going to bet that she is on her way to being an A-level character with the movie.

Marvel investing that much money isn't really a measure of her popularity. Let's face it: they made Ant-Man. They could do Speedball: The Movie and turn in a profit. It's virtually risk-free especially connecting her to the next Avengers movie.

Publishing-wise, her initial run of Ms. Marvel (Ja'77-Ap'79) was just 23 issues, two less than Savage She-Hulk and less than half of Spider-Woman. She joined the Avengers first but wasn't there long, being written out in the infamous Avengers #200 (O'80), not even five years after her super-hero debut.

Yes, Chris Claremont brought her back in 1981 but he took away her powers in Avengers Annual #10 and moved her over to Uncanny X-Men. But not being a mutant had her feel out of place so he turned her into the cosmic Binary in UX #164 (D'82). After that, she soon left the book as Claremont was more interested in Rogue, ironically the one who stole Carol's original powers!

For the last twelve years, she appeared in short-run series after short-run series (though the first one, Ms. Marvel Vol.2, lasted a good 50 issues), especially after assuming the mantle of Captain Marvel. And they are still trying to find the right tone and niche for her, given her portrayal in Civil War II.

Most popular Marvel female super-hero? I would say  Top Ten for sure, but more as Ms. Marvel than Captain Marvel.

Marvel had a habit of writing out heroes in the early 80s:

-The Avengers #200 ended with the Avengers trying to believe Ms Marvel would live happily ever after, so the issue was apparently intended as her final story. Although she returned in Avengers Annual #10 the issue wrote her Ms Marvel identity out permanently. My guess is Claremont was told he could only bring her back if he depowered her, and he created Rogue to fulfill the condition.

-The White Tiger was beaten up and gave up being the White Tiger in The Spectacular Spider-Man #51-#52. My guess is he was seen as a copy of the Black Panther.

-ROM #24 concluded the abandoned Xandar/Skrull storyline from Fantastic Four. Richard Ryder had to give up his Nova powers to return to Earth.

-Spider-Woman died at the end of Spider-Woman #50. Soon after The Avengers did a storyline in which left her alive but depowered.

On the other hand, She-Hulk wasn't depowered at the end of her series. Perhaps it had already been decided to add her to the Avengers.

Later the non-mutant New Defenders were killed in the last issue of The Defenders, albeit soon brought back. My guess is this was to end the Angel's, Beast's and Iceman's entanglement with them.

I don't think Captain Marvel has been a huge success for Marvel -- the sales figures (and frequent cancellations) speak for themselves. I would rely on those numbers for any assessment.

Content-wise, I've always been disappointed in how various Marvel writers have handled Carol Danvers. She should be Marvel's Wonder Woman, but they keep botching it. The Marcus storyline was a horror, her alcoholism story mostly occurred in random panels of Avengers and didn't really add much and her heel turn in Civil War II was a mind-bogglingly bad decision for the character. I don't doubt that each of these writers meant for these stories to do well by all the characters involved, but somehow Danvers always gets the short end of the stick.

There have been some good developments. I liked how she was handled in Jessica Jones, as a staunch best friend. Her loyalty and devotion to the Air Force is rare in superheroes, and is well developed. And she has shone as a role model and inspiration for Ms. Marvel -- well, at least until Civil War II.

I've never liked the idea of Carol Danvers as "Captain Marvel". I know this is just me being a horrible geriatric fanboy, but I've never accepted anyone under that name but Billy Batson. If I was Marvel, I'd rent the name out to DC, and soak them for as much cash as possible.

Plus, I always thought that, properly pushed,  Storm would have made a much better lead female character for Marvel.

I can think of one really good reason why Marvel really wants to own the Captain Marvel name.

But, yeah, Storm would make a great alpha female for Marvel, but they don't do anything with her. She's not even leading the X-teams she's on.

Marvel has a legitimate interest in keeping a recognizable high-profile female superhero.

Sales do not really have much to do with it, and probably never did.  DC has a similar need and that did not stop Wonder Woman, which is a far better know character, from having a hard time keeping the character afloat.  Quite simply, it is bad business to have only men among one's well-known superheroes.

As for Carol specifically, well, no, I don't think she has been much of a critical success during her career, let alone a comercial one.  Her second ongoing, around the time of Secret Invasion, was particularly disastrous IMO.  It seemed to be written specifically to ensure that Carol would never be the most interesting character of any issue.  It also went out of its way not to focus on her when given any chance, and seemed to take pride on failing to offer proper context for the individual issues as well.  I can't imagine anyone becoming a fan of the character due to that run.

And as Luis suggests, something similar is happening with Captain Marvel. She hasn't been a sales success, but Marvel has kept throwing her back on the stands -- and no other Marvel superheroine can boast the same. IOW, if you think "Marvel" and "female hero," you're very likely to think of Captain Marvel. For better or worse, she is becoming (and with the movie, will have become) Marvel's best-known female superhero. Marvel's Wonder Woman.

And this despite the eye-popping history of the name "Captain Marvel"! While I revel in all that tawdry backstory, and welcome others who do the same, I suspect the movie-going public isn't going to give a rat's patoot about Billy Batson, Mar-Vell, or that guy who yelled "Split!"

In the mid-80s Earth One WW was married to Steve Trevor in the final issue of her original series and killed in COIE #12(1) to prepare the way for the feature's post-COIE reboot. It wasn't ready to go so DC published the mini The Legend of Wonder Woman to keep the rights. My recollection is DC has bought out the Marston estate's interest in WW since then.

(1) Earth Two WW went to live on Mt Olympus with her Steve Trevor.

I don't think too many people remember that Iron Man wasn't a big deal and was generally unknown to the public when Robert Downey Jr imbued the character with his personality.

In addition to being an Oscar-winner, Brie Larson has proven he acting chops over a 20-year career. If that isn't enough, she looks like this: 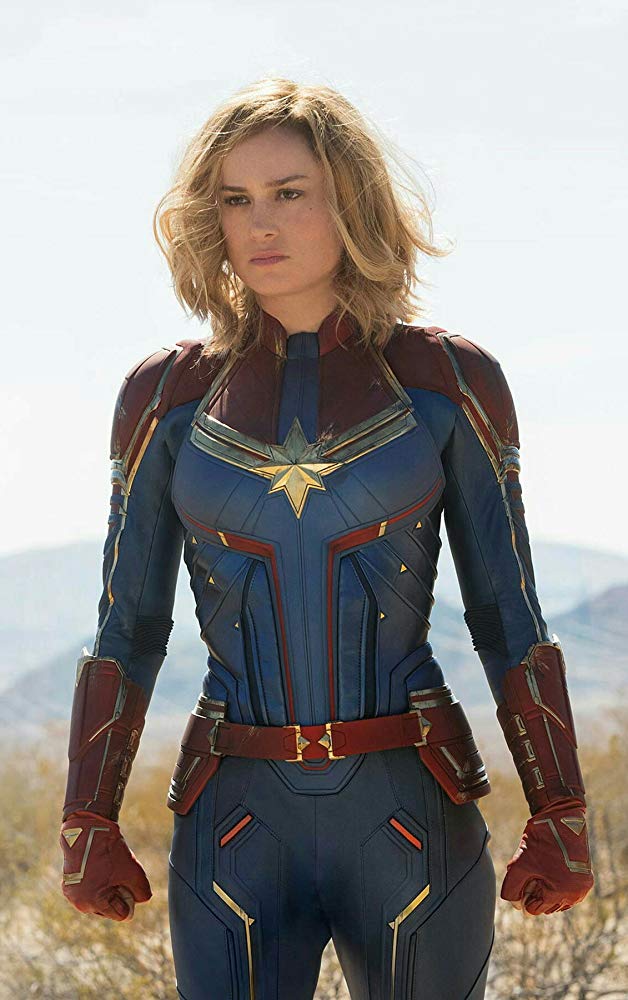 If Marvel is smart (for a change) they will not only have her in two or three titles when the movie comes out but they will make a point of assigning very good writers and artists to those titles.

Wasn't this debunked a while back? I'm pretty sure I heard that DC had worked things out with the Marston estate.