It's full steam ahead on Archie (past, present and future)

Confused yet? Let’s clear it up:

A few months back, Archie Comics set a lot of pundits and talking heads a-twitter by announcing the death of their namesake character. Naturally, comics fans knew not to take that at face value. But Archie Comics did kill off a couple of superfluous Archies. 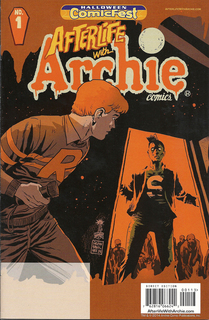 The deaths – there were two – took place in Life with Archie magazine, which has been running two storylines simultaneously per issue for several years. One story each issue continued a possible future where Archie marries Veronica, a second where he takes Betty to the altar. These have been good comics, really, with superhero veteran Paul Kupperberg doing his best soap opera stylings. (If you think soap opera and superheroes don’t mix, you haven’t been reading Amazing Spider-Man for the last 50 years or so.)

The two storylines wove different futures for the familiar Riverdale gang, but some things were the same in both. For example, it seems Jughead is destined to run the Chocklit Shoppe no matter whom Archie marries, while Jughead himself marries Midge Klump (formerly Big Moose’s girlfriend) in one future, and Ethel Muggs (formerly Big Ethel) in the other.

In the penultimate issue of Life with Archie, Kupperberg dovetailed the two stories by cleverly writing around all the differing elements, and spotlighting only the parts the two series had in common. So, for example, when Marmaduke “Big Moose” Mason appears, no mention is made of his occupation – which in one story is mayor of Riverdale, and in the other is a would-be police officer.

The reason for this merger is that both stories necessarily end the same way, with Archie sacrificing his life to save a friend. (SPOILER AL—oh, never mind. The title of the story is “The Death of Archie,” after all.) The final issue follows this now-singular storyline, with a “one year later” coda to see how an Archie-less Riverdale gang fares.

Nearly everyone knows Archie and the gang, and most people love them. For many American teens and tweens isolated by the cruelty of adolescence, they were practically friends. So anyone who doesn’t get a little misty-eyed reading these stories needs a refresher course in Archie Comics, starting today.

And a refresher course in Life with Archie is easy, because the publisher has been collecting the magazine in trade paperback form all along. Archie: The Married Life Book Six ($19.99), the latest and last, shipped to comic shops Nov. 19.

Obviously, Archie and the gang still appear every month in various titles – forever teenagers, forever in high school, forever evoking laughs in eternally unchanging Riverdale. But there’s another Riverdale, where change – and its handmaiden, death – are very much in evidence. 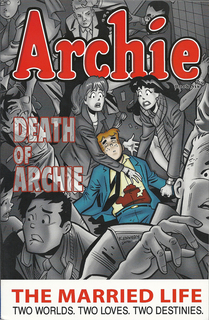 Afterlife with Archie launched a few years ago, sparked by a fad, as Archie Comics have been wont to do since forever. This fad, though, isn’t something vanilla like bell bottoms or Elvis – it’s the walking dead! The first one in Riverdale was Jughead Jones, and other familiar faces have followed suit.

Many fans initially thought this was a terrible idea; Archie comics were supposed to be fun and youthful, not grim and deadly. But it turns out that another couple of superhero vets – writer Roberto Aguirre-Sacasa and artist Francesco Francavilla – made Afterlife with Archie a stunningly good read.

Why bring it up now? Because at Halloween ComicFest – an annual party where participating comic shops give away free comics – a reprint of Afterlife with Archie #1 was available. And following in the footsteps of Life with Archie, the title is being reprinted in magazine form, with the second issue also out Nov. 19 ($4.99).

Go read it. Unlike other survivors in zombie stories, you know these characters intimately, which makes it all the more suspenseful.

A quick detour from this endless stream of alternate Archies is necessary, because the foul sorcery that kicks off Afterlife with Archie is the result of a well-meaning spell gone wrong. And that spell was cast by Sabrina the Teenage Witch. 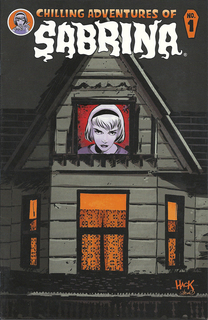 Unless you saw the animated Sabrina, the Teenage Witch Show (1971-74), or the live-action Sabrina TV show starring Melissa Joan Hart (1996-2003), or Sabrina: The Animated Series (1999-2001), you might not be familiar with this character. Sabrina Spellman was a late-comer to the Archie gang, not debuting until 1962 – most of the others were created in the 1940s – anticipating the similarly themed Bewitched by two years.

Sabrina’s comic book life has been off and on as well, at least compared to the rest of the Riverdale gang, most of whom have been in continuous publication for 70 years. She’s had three or four stabs at her own title, including a manga-style series that ran from 2005 to 2009. In her early days she appeared here and there in various Archie titles until one of the TV shows established that she didn’t even live in Riverdale, but in neighboring Greendale.

But she’s got a starring role in Afterlife with Archie, and it’s magically malicious. In the latest issue her scary godmothers were trying to marry her off to the worst of H.P. Lovecraft’s elder gods, Cthulhu. Hopefully she’ll somehow escape, as that would be the worst – and shortest – wedding night in history.

Which has nothing at all to do with Sabrina’s new ongoing title, which debuted in October. Chilling Adventures of Sabrina gave Ms. Spellman a different origin and is set in a different time period (the 1960s). But she still has two witchy aunts, she’s still sweet on Harvey Kinkle (her long-time boyfriend) and she’s still got her familiar, Salem.

Savvy readers will recognize most of these elements, as they will the title (it's a shout-out to the Chilling Adventures in Sorcery comic book of the 1970s), the trade dress (which lifts from V. C. Andrews’ “Flowers in the Attic”), the writer (Aguirre-Sacasa again) and the art (by Robert Hack, who owes a lot to comics great Gene Colan). But Aguirre-Sacasa jiggers the familiar parts to come up with something as fresh, exciting and creepy as Afterlife.

But if all you want is some old-fashioned Archie laughs, that’s covered, too. IDW is reprinting the 1960s “Archie” comic strips, with the second volume having arrived in June ($49.99). Written and drawn by Bob Montana, the original heart and soul of America’s favorite redhead, this is the pure essence of Archie humor. And, weirdly, it’s not at all mired in the past. The occasional beatnik wanders through, but mostly the humor captures the timeless story of girl meets boy meets girl, and their oddball teenage friends. 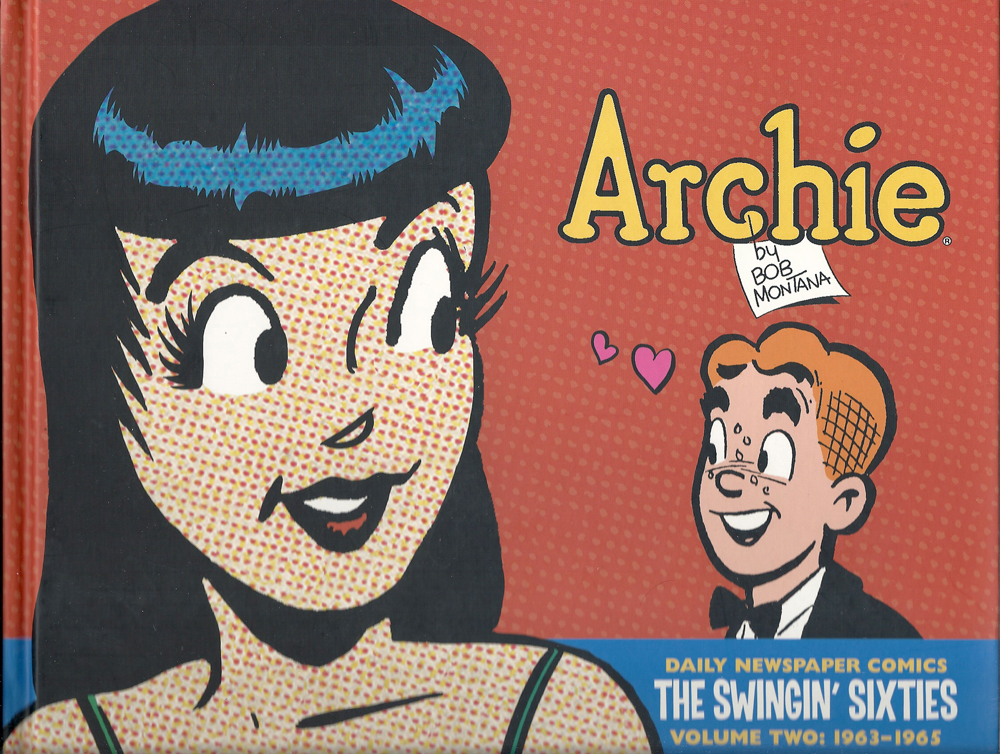 ...Sabrina was introduced to TV in the second season of the 60s-70s Filmation ARCHIE series , when it became " The Archie Comedy Hour " IIRC the exact title .

The Filmation series changed official title/format , if not every year , then close to it ~ I remember a joke on The Simpsons , said by Bart & Lisa , reflecting this tendency of old school SAT-AM shows - You might remember that the Filmation (Did they especially like this ???) DC series of the 60s started with (1966) 2nd half- hr.'s worth of Akky (& other DCs , Teen Titans , etcetera) added - which in '68 spun off into a stand-alone Aquaman series , as , the ABC LA series finished , a BATMAN series gave the original Sabbath day a WORLD'S FINEST seal , THE BATMAN-SUPERMAN HOUR ! - which eventually IIRC also split into seperate 1/2 hours , joining Akky - IIRC , the 1969/70 season was the last one for all 3 .

One thing I kinda-remember about Montana's ARCHIE strip , which I didn't start reading til' I guess 1966 at the earliest (It was carried in our six-days Westchester County , NY , paper my family had home-delivered) is , during the Nixon era:

(1)  A fairish amount of " Oh , those kids !!! " sorta-snarly jokes about longhairs/protestors/rock'n'rollers (I recall a beatnik-y boyfriend to the daughter of the house in BRINGING UP FATHER , also started by me 'bout '66 also)

(2) Even those jokes aside , a fair number of gags recolving totally around the adults , Pop Andrews and Mr. Weatherbee - After all , newspaper strips are generally tailored to appeal to the adult , who buys the newspaper .

However , the announced 2nd and 3d issues of said new SABRINA have been greatly delayed ! There has been grousing over at the Archiefans forum regarding this

When I saw those shows they were billed as Superman/Aquaman/Batman. It was a half hour show and alternated which series would air every day.

Aside from (I assume) the SUPERBOY " back-up cartoon " , were other back-ups shown inn this vbersion ???????

There'd be three complete cartoons in a half-hour , I recall .

This would have been somewhere in the 1970s but I believe it came back briefly in the 80s.

Superman had two Superman stories with a Superboy in between. Batman had two two part stories I believe. And Aquaman had two Aquaman stories and a "special guest star." Couldn't stand Aquaman and only watched his episodes for the guest star. Hated Kid Flash being in the Flash stories. Some characters shouldn't have a sidekick.

Never noticed as a kid but when I saw a few Batman episodes on youtube I noticed Commissioner Gordon, Joker, Penguin, Riddler, Mr. Freeze, and I think the rest of the villains (except Catwoman) in that show were all Ted Knight. I'd known he was Riddler but hadn't realized he was everybody else.

...Bob Haney and George Kashdan did a fair amount of writing for these series , didn't they ?

I remember a USA Network?? repackaging of the Filmation material and some Super Friends material during the Nineties , with the Super Friends material cut up into chapters and serialized?? (I saw little of Super Friends beyond the first season or two , and didn't realize 'til the Internet era that the show got more " real " comic book-ish later on .) Perhaps cut uip into essentially self-contained installments , like THE SPIRIT handled mult-week stories??

Super Friends got pretty silly, except for the Challenge of the Superfriends season and the last two years when they brought in Firestorm and Darkseid. I remember one season seemed like half the show was the stupid Wonder Twins. They couldn't even come up with decent powers for them? One turned into a kangaroo a lot and the other was always turning into water and jumping into a bucket so the other could carry him around. If they really insisted on dumb teenagers in the show why not put the Titans in and have them talk and act groovy?

Much as I loved the Filmation cartoons featuring various DC heroes, the Archie shows were okay, too. I wasn't aware Sabrina, the Teenage Witch came along before Bewitched.

And I LOVED Life With Archie and can't understand why they did away with it.

I wasn't aware Sabrina, the Teenage Witch came along before Bewitched.

Sabrina the Teen Age Witch first appeared in Archie's Madhouse #22 (OCT62). Sabrina's stories were more concerned with teenage things and helping others. There's not really a relationship between her character and the adult married Samantha.

The first broadcast episode of Bewitched was on Sep 17, 1964. It's pretty obvious that Bewitched was inspired by the popular movie Bell Book and Candle (1958), in which a witch played by Kim Novak enchants a man played by James Stewart to fall in love with her. She steals him away from an old enemy of hers. The movie was adapted from a 1950 play of the same name. The Samantha character in Bewitched won her husband's love fair and square.

Wikipedia says it was only a modest success in 1958, Guess it's popularity came from tv viewings. One of the oldiest stations was playing it last month. Didn't look very interesting, I think most of the popularity it did get came from the cast.