It's Wonder Woman Day! (And Month. And Year.)

Thursday is an odd day for a “Day.” Comics arrive at comic shops on Tuesdays (DC Comics) and Wednesdays (everybody else), and Saturdays have a lot of foot traffic (so Free Comic Book Days are always scheduled on Saturdays). Those three days would be more of a natural “Day” than a Thursday.

But Oct. 21, 2021, is exactly 80 years from Oct. 21, 1941, when the Amazing Amazon made her first appearance. A nine-page preview depicting Wonder Woman’s origin was published in the back of All-Star Comics #8, cover dated December 1941-January 1942, but appearing on newsstands in October.

All-Star was an appropriate place for WW’s first appearance, because it starred the Justice Society of America. Wonder Woman joined that seminal super-team three issues later in 1942, as a “guest star during a national emergency” (this was the first issue written after Pearl Harbor), and as a member of the largely ceremonial “Justice Battalion,” basically just another name for the JSA during the war (but giving them an official U.S. Army designation, to excuse them all from enlisting).

She formally joined the team in the next issue, as “secretary.” Yes, secretary. Initially all she did was show up at the beginning and end and take notes, even though she was one of the most powerful characters in the book! That bit was eventually dropped, and the Amazing Amazon joined the JSA on its adventures. But as a sign of the times, retirement of the “secretary” label took an unconscionably long time.

Meanwhile, Wonder Woman was a smash hit with readers. 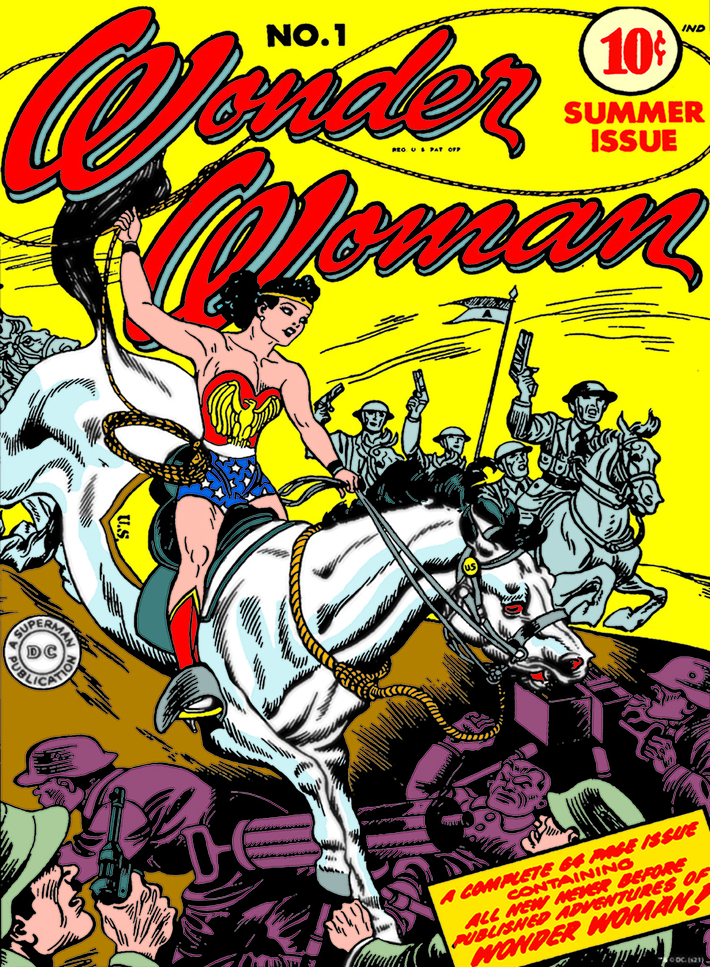 Wonder Woman the comic book debuted in 1942, but the character had already appeared in Sensation Comics earlier in the year and All-Star Comics in 1941. (Cover art by H.G. Peter, copyright DC Comics)

A month after All-Star #8, a new anthology named Sensation Comics launched with Wonder Woman as its lead — which would remain true for the bulk of the title’s existence. A few months after that, Wonder Woman #1 debuted — one of the few titles in the ‘40s dedicated to a single character, and one of the even fewer that has continued to this day. She gained a fourth platform when Comic Cavalcade premiered near the end of 1942, an anthology headlined by Diana, Flash and Green Lantern.

The Princess of Power has had her ups and downs since then, but she is undoubtedly the most famous female superhero on Earth. And she’s finally getting her due, as DC celebrates not just Wonder Woman Day, but essentially Wonder Woman Month, and if you squint at it just right, Wonder Woman Year.

On Wonder Woman Day proper, DC released three free comics, samplers which may still be available at your local comic shop. They include: Beyonce’s civic activism is one of the features of Wonderful Women of the World, a YA anthology. (Art by A D’Amico, copyright DC Comics)

On the comics publishing front, DC scheduled seven Wonder Woman titles in October (although one will be delayed to November). They include: Wonder Woman: Black and Gold #5 is one of the seven Amazon-centric titles from DC in October. Wouldn’t this cover make a great poster? (Art by Julian Totino, copyright DC Comics)

Only four of these will be ongoing, one of which is the evergreen Wonder Woman. There are high hopes for Wonder Girl, written and drawn by the astonishingly talented Joelle Jones (Lady Killer), a character whose unconventional origin and infectious enthusiasm should be a springboard for a wealth of stories. Nubia is a long-awaited spotlight on a neglected member of the Wonder cast, and there isn’t anyone in the comics community who isn’t intrigued by Historia — a blank canvas on which anything can be written.

Wonder Woman: 80 Years of the Amazon Warrior and Wonder Woman: Through the Years both collect special stories from the last eight decades, usually first appearances, origins or significant events. Somehow, the two books manage to cover many of the same important topics without duplication. (One book, for example, has the first appearance of the first Cheetah, while the other has her second appearance, both of which serve well as a primer for the character.)

Of course, the celebration isn’t restricted to just reading material. Out in the world:

There’s plenty more, because as Jimmy Durante always said, everybody wants to get into the act. I don’t have room to list it all, but information on Wonder Woman on social media, in video games, in merchandise, in kids’ activities and more can be found at wonderwoman80.com.

She has certainly earned it. Despite our patriarchal world, Diana is one of only three characters to headline comics continuously since the ‘40s (Superman and Batman are the other two). Despite not being the first female superhero (that would be Sheena, arguably, or Fantomah), she has carried the banner longer and higher than any.

And as Lynda Carter and Gal Gadot have proven, she is just cool.