For decades, usually on orders, John Romita (and sometimes Marie Severin) made changes to faces on covers. (Just the other day, I saw what the face Jim Starlin drew on the cover of CAPTAIN MARVEL #29 looked like before John Romita replaced it.

Is that an S branded into his forehead?  LOL!

Not perfect, but for fun I did a little cut and past job of a compromise between the two. 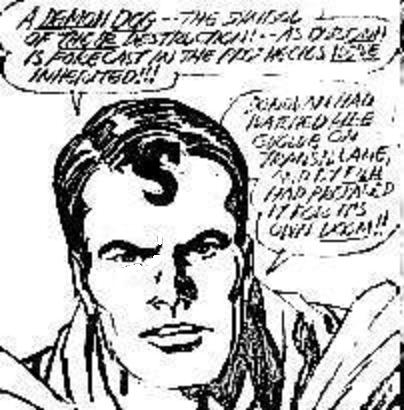 It was all cut and paste (and a little erasing). No personal input. The curl was from the Murphy Anderson pic, probably darkened by making it black and white.

I do think the Anderson, who I regard highly as an artist, contribution was unnecessary and Vince Colletta inks would have smoothed out any inconsistencies. However, if memory serves me correctly, they were getting Murphy to ink all the 'Superman' faces on the Werner Roth/Colletta Lois Lane books too. I think DC were a bit too precious over marketing.

Permalink Reply by Craig Boldman on June 4, 2013 at 7:02pm
At least they didn't single Kirby out. I've seen an Al Plastino head on a Carmine infantino Superman body and a Curt Swan head on an Alex Toth Superman figure on a Super Friends cover (and mind you, Alex Toth did the Super Friends model sheets for other artists to follow!). I think Plastino's faces meshed with Kirby's style a little better than Murphy's.

I'm thinking it looks quite a bit as I remember John Byrne's Baron Blood looking in Captain America #253-4 and reprinted most recently in the magnificant Byrne/Stern reprint volume "War and Rememberance".

The biggest irony was when Jack Kirby returned to Marvel in 1976.. The first thing I saw was the cover to Captain America #193 and a very John Romita face over the Kirby cover. I know Romita inked that cover but Cap's face is far more Romita than Kirby.

Here is a better version of Batman by Jack. I particularly like the Joker and the Penguin. Also found a Superman picture that wasn't redrawn by Murphy Anderson. Far better. 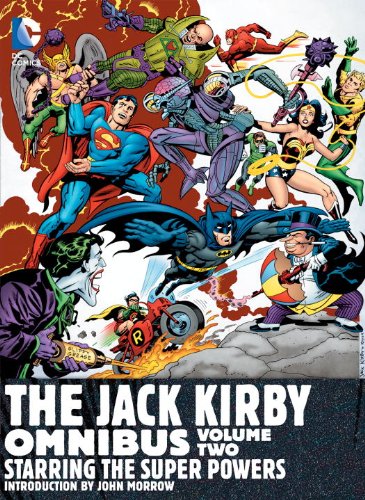 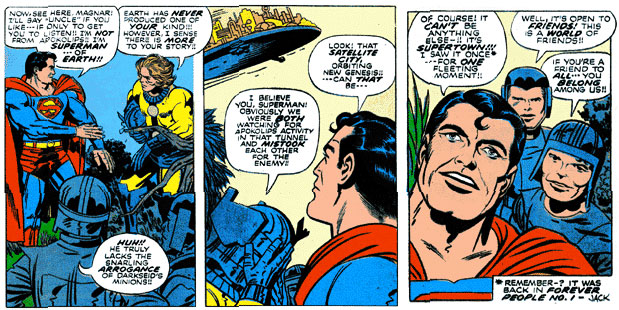 The former image is from a house ad that advertised the first Super Powers mini. I think it's cropped a bit; there's an image of the full ad here. Kirby drew the covers for the earlier issues (and was credited with plotting them, but it's not very evident in the stories) and wrote and drew the final issue.

The middle issues of the second Super Powers mini had the characters split up into teams. Superman and Firestorm were the focus of #4, Batman, Robin and the Flash of #5. Paul Kupperberg was credited as writer but there were Kirbyish elements in the writing (e.g. #3 recycled an element from the cover story of House of Mystery #85), so one wonders if that was the whole story. However, the images of the original art I've found online don't have pencilled Kirby dialogue in the art.

Thanks Luke. Kirby's Robin looks interesting too. Perhaps a Kirby Teen Titans might have been a good idea in a sort of X-Men/Forever People/Boy Commandos style. I sort of like Kirby's kid gangs in a goofy kind of way.

Could have sworn that Steel The Indestructible Man #1 cover was Don Heck, not Kirby.

But it's Heck imitating Kirby; I think that's what Dandy was getting at. (At that point the conversation was partly about we would have liked to see Kirby do.)

Incidentally, in 1967 a Wayne Boring Superman face was inserted into the Mike Sekowsky/Sid Greene cover of Justice League of America #59.

Jeff of Earth-J replied to Emerkeith Davyjack's discussion All-purpose newspaper strips discussion
"I know. He looks like an idiot, doesn't he?"
1 hour ago

Jeff of Earth-J replied to Jeff of Earth-J's discussion The Abomination
"HULK #137: The Pequod Andromeda is a solar-powered star-schooner whose photonic engines catch…"
1 hour ago