OK, I haven't been following this series, but I came across some spoilers and I had some thoughts about it that I decided to share with you, you lucky people.

First off, some spoiler space: 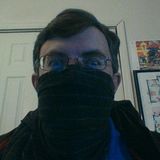 OK, the Masked Moron will definitely NOT be passing the Judgment of the Space Gods, because he once - deliberately, and with malice aforethought - ate a meat lover's pizza on a Friday in Lent.

Anyhow, the spoilers I saw were about two who passed, one who made sense to me, and one who didn't.

First off, the one that made sense to me:

So, Kamala passes because she's A Good Kid, who doesn't leap at the chance to take the selfish way out and has faith that her mentor would never offer her a choice like that.  Fine.

Second off, the one that didn't make sense to me. Victor passes, apparently because he stayed true to being the same egotistical @$$hole he always was? I suppose that you could argue that he was being "brave" in not telling what he believed to be a lie to save his skin.  I don't blame him for laughing at the Space God's rather puerile tactic.   If I didn't know better, I'd suspect that the writer said, "Why don't I have Doom pass, just to mess with the readers' heads?"

Now, we all know that the status quo ante will return in a month or two at most.  The structure of the Marvel Universe doesn't allow for anything else.  A shame, in a way.  I wouldn't have minded an on-going series (I suppose that they could still do it as a "What If") in which the Space Gods killed everyone that failed and spared everyone who passed, and then looked at how the survivors dealt with the aftermath.  Would they be grateful that they were spared, or would they start considering themselves the Chosen?  How would they deal with the loss of any number of loved ones that "failed"?  How would they deal with the fact that Doom was considered worthy to live?  How would they rebuild society? What form would the new society take?  I think that there's a potentially interesting story there,  but I'm not so sure that we'll ever see it.

Also, in Kamala's "judgment", the Space God refers to "Marvel Heroes".  Does he know that they're all Marvel characters? How "meta"!

I dunno.  Probably they got bored and decided to ome back and do it again.

Luke Blanchard replied to Jeff of Earth-J's discussion Tales to Astonish
"I think this was where Marvel first used the "never ending story" approach."
3 hours ago

Jeff of Earth-J replied to Steve W's discussion Comical Comic Cuts
""Can anyone come up with a caption?" I can go you one better. Here's the…"
10 hours ago