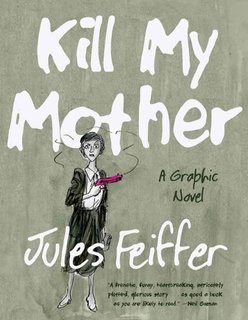 Kill My Mother: A Graphic Novel

Finally got my hands on a copy of Jules Feiffer's Kill My Mother, after it had already made some Year's Best lists. It's amazing how well his cartooning style translates into a long story, and that he hadn't created a graphic novel before. It's a crime noir with a plot so convoluted that it defies simple summary. A mother does actually get killed--spoiler alert!--but the title mainly comes from frustrated children expressing their frustration in the usual "I could just kill my mother" way.

Feiffer has said that he always wanted to draw a noir story, but it took him his whole career to figure out how. This is almost impossible to believe, because his cartooning captures the noir feel perfectly, without looking substantially different from the shorter strips for which he is known. In the course of the story he even manages to work in the singing and dancing sequences I associate with his work. For a few scenes at least, it's a noir musical!

He has a lot of fun with the traditional noir detective tropes, too. Part One is set in the seedy town of Bay City, and features a stereotypical drunken private eye, who finally gets shot to death with his own gun while wearing women's panties. I could not make this up. The scene shifts to Hollywood for Part Two. It's a setting custom-made for artifice and false identities, and the other seedy P.I. from Bay City we met in Part One gets called in to make another hit. He fails at the job too, but does manage to survive his embarrassment. The toughest and pluckiest characters are all women, turning the stereotypical "tough broad" stereotype on its head as well.

The artwork and the twisty plot both invite repeated readings, and I look forward to spending more time with it in the future.