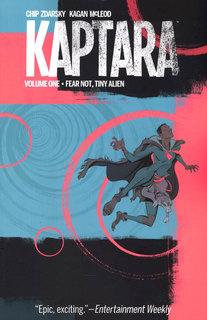 A science fiction adventure that starts out looking pretty conventional, Kaptara begins with an exploratory mission to Mars. But very quickly--during the first issue--things take a hard left as the space craft gets pulled into an unknown rift in space. The crew abandons ship, and fall onto an alien planet called Kaptara. The place is clearly truly alien, i.e. not in our universe. The two crew members the narrative is following find themselves under attack by a huge alien creature. One of them is rescued, and when he comes to...

He's in a castle, attended by more aliens. So the story basically shifts into fantasy mode, because the aliens have a feudal system, use swords and similar non-technological weapons, and have animal/machine hybrids, like tanks with animal heads. It's visually crazy, and full of all sorts of cliches, like sexist trolls and macho male heroes. There's also a Motivational Orb that floats around displaying sayings like "Be the Best You You Can Be."

The main motivation for this first arc is provided by a Kaptara bad guy named Skullthor who is thought to be using the dimensional rift to take over the Earth. This motivates the Earthlings (to save their planet) and the Kaptarans (to defeat Skullthor once and for all).  But like all epics, the path is full of one distraction after another. The story is so crazy that's it hard to know what to make of it, really. The action carried me along through five issues pretty well, but I'm not sure how motivated I'll be to continue with it.

I read the first issue of this based solely on the artist. Kagan McLeod was the artist on one of my favorite OGNs (or adapted from a webcomic, however you want to identify that one), Infinite Kung Fu. I'm not sure if I had trouble following the first issue or if it was the fact that an issue soon after had a naked old man on the cover whose privates were covered by his beard, but for whatever reason, it turned me off right away.

I have enough of a back-log that it makes it easy for me to look at a new series and brush it away for any reason whatsoever just so I can get caught up on my pile!