'Kingsman' movie may or may not be good, but graphic novel is terrific 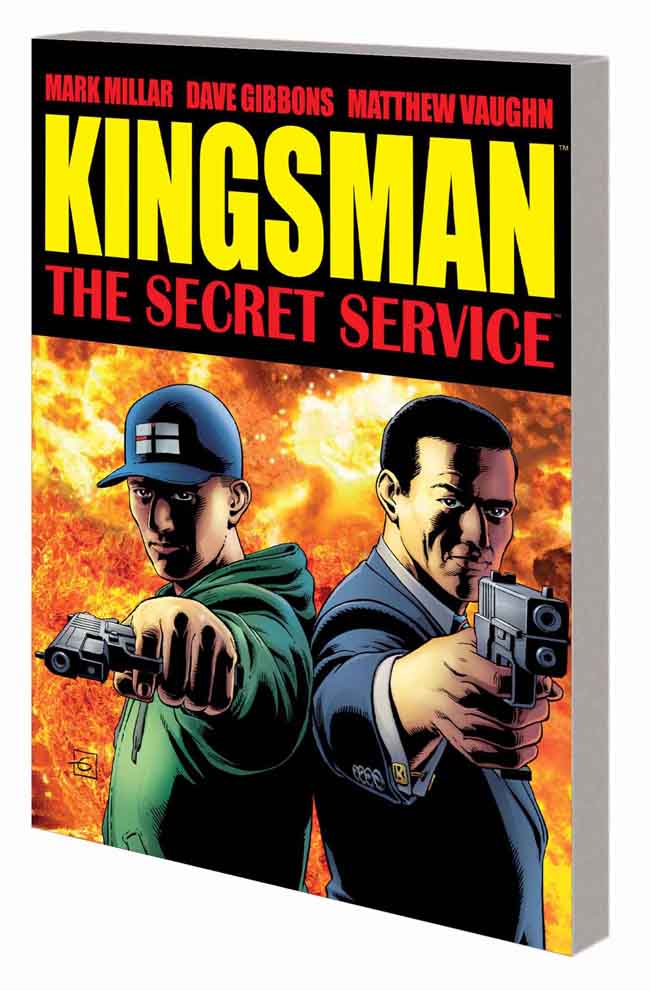 A new printing of the graphic novel “The Secret Service: Kingsman” has been released. Copyright Marvel Entertainment. 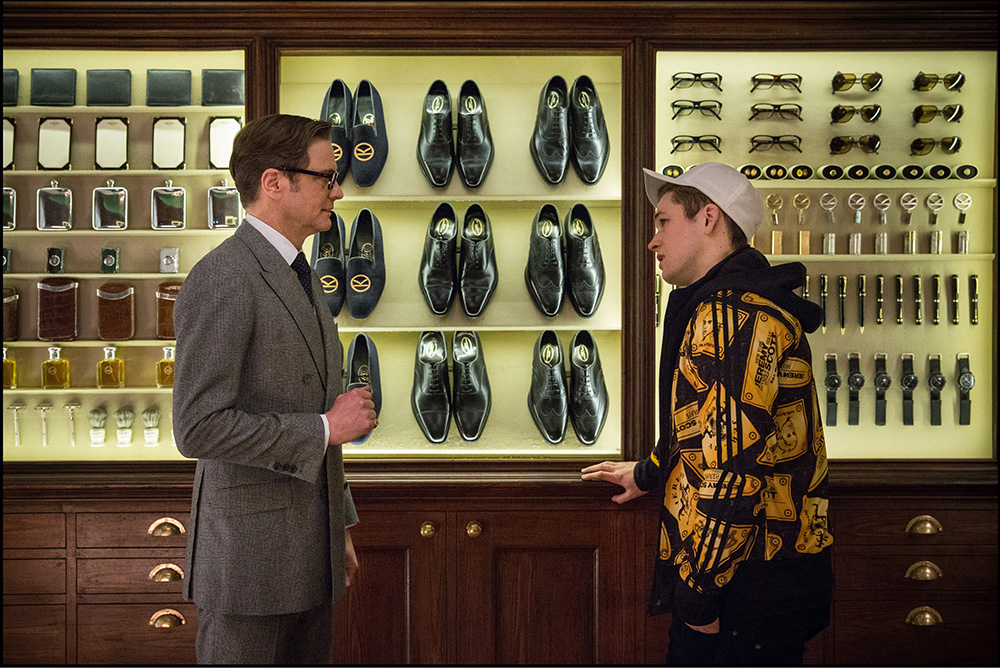 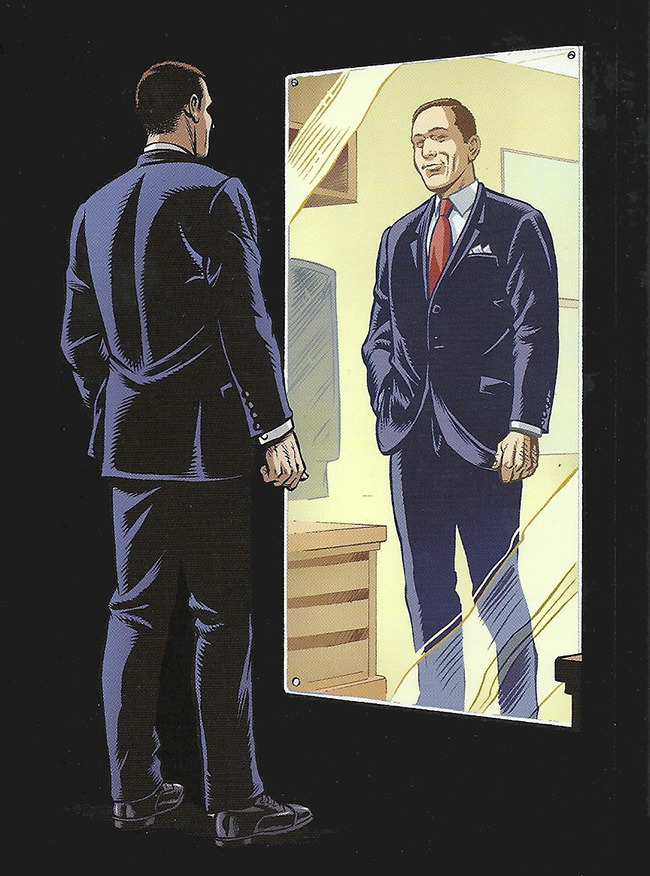 Kingsman: The Secret Service will rise or fall on its own merits when it premieres Feb. 13. But its source material, the graphic novel The Secret Service: Kingsman ($12.99), is good enough and different enough that it’s well worth your time either way.

The Secret Service (“Kingsman” was added to the title when the movie was named) is written by Mark Millar, well-known to comics and movie audiences alike for Kick-Ass and Wanted. The art is by Dave Gibbons, lionized for Watchmen. In other words, it’s by A-listers.

Anyway, there’s a huge difference between movie and graphic novel, more than just the transposed name. For example, in the movie, super-spy Harry Hart (Colin Firth) and new recruit Gary “Eggsy” Unwin (Taron Egerton), whom Harry takes under his wing, don’t appear to be related. But in the book they are uncle and nephew, which is the crux of the story.

In the book, the Eggsy we first meet is a pretty pathetic character. He’s a 17-year-old, dead-end kid living in  South London government housing project with an equally dead-end mother, who is perpetually on the dole and has spent her life hooking up with one drunken, violent lout after another. Eggsy spends his time with his also equally dead-end mates getting drunk and/or high, stealing cars and generally getting into trouble.

Meanwhile, on the other end of the socio-economic scale, we meet secret agent Jack London, a handsome, well-dressed man in his fifties who works for MI-6, has a license to kill and is on a first-name basis with the most important people in England. He is working on a baffling case where scientists, movie directors, actors, science-fiction writers and other notable people are being kidnapped wholesale by parties unknown, for reasons unknown.

(And yes, the character’s name is Jack London, the same as the author of The Call of the Wild and White Fang, among others. Kingsman checks several other famous names in adventure fiction also, including a certain Mr. Bond, whose spirit London is certainly channeling.)

As it happens, London is Eggy’s uncle. Eggsy and his mother, Sharon, think Jack is a police investigator of credit-card theft. Nevertheless, they’re aware his ID is a get-out-jail-free card, so when Eggsy gets into trouble – again – Sharon calls Uncle Jack to get him out of the pokey.

It is here we see the dysfunctional family dynamic in play. Jack is a disapproving, personal-responsibility-believing stiff-neck, while Sharon is a blame-everyone-else, irresponsible layabout. Eggsy, of course, is the football they (figuratively) kick back and forth. The argument they have here is clearly one they’ve had many times.

But something changes this time. It dawns on Jack that his aloof approach to Eggsy – essentially a relationship by Christmas card – is partly to blame for the lad’s rootlessness. And he decides to change things – dramatically.

Here the movie and book intertwine, as Jack enrolls Eggsy in, essentially, spy school. “This is your home for the next three years,” Jack says as he drops Eggsy off at the training complex in Gosport. “It’s not like a film or a television show, where someone gets drafted and immediately knows everything. We’re going to teach you how to shoot properly, how to fly planes, how to do stunts in any kind of car and bring a woman to orgasm every single time.”

“Every bugger thinks they’re good in bed,” chimes in Training Officer Rupert Greaves, the “Q” of the book, “but we’re going to cover the next six months on the second G-spot alone.” Greaves and Jack mention some other subjects: medicine, physics, ballistics, languages, kung fu, botany, boxing …

Oddly, Eggsy has some advantages over his posh classmates arising from his deprived childhood. He’s knowledgeable and instinctively good at anything resembling the video games he’s played obsessively, including firearms, piloting aircraft, observation, surveillance and, of course, grand theft auto. Also, he’s pretty good at street-fighting. “The Eton Boxing Club,” observes Greaves, “hardly compares to fighting the local police every night.” So Eggsy’s at the top in his class in those areas, which is a good thing …

… because it’s the only thing keeping him from washing out. He’s at the bottom of his school class in all those areas that have to do with socio-economic class. Not only does Eggsy not know which wine to choose at dinner, but his conversational skills are minimal, his choice of clothes thuggish and his understanding of women nonexistent.

That makes for a lot of funny fish-out-of-water scenes, but Millar doesn’t settle for cheap laughs. Eggsy’s ignorance – and his awareness of it – quickly segues into pathos. Eggsy’s humiliation is pretty familiar turf for anyone who’s ever felt inadequate or laughed at for being out of step with the in crowd … which is pretty much all of us.

Oddly, the villain of the piece shares some of Eggsy’s faults. Unlike the movie’s villain, Richmond Valentine (a lisping Samuel L. Jackson), the graphic novel’s bad guy is, as described by Uncle Jack, a tech savant who “is a billionaire by 22, but still an enormous social reject.” And one of his personality flaws is an inability to relate properly to his girlfriend. But, unlike Eggsy, he is far from sympathetic, because his master plan – involving the deaths of five billion people – is monstrous.

Cheap laughs come into play here, too, as our tech guru is forever bestowing on his henchmen  nicknames they hate – and is completely unaware of their discomfiture. He calls the guy with the prosthetic legs “Gazelle,” for example, and labels the guy with the eye-patch “Cyclops.”  In fact, Gazelle calls him on it, saying it’s “insensitive” and “making fun of a guy’s disability.”

Gazelle, by the way, is one of the few characters who makes the transition to the movie, albeit with the wit removed and his sex changed. So the film is not going to be a bit like the graphic novel, outside of the broad strokes of a working-class lad learning to be a super-spy and being challenged by a Bond-style supervillain.

Which you may or may not enjoy. But the graphic novel is certain to leave you shaken, and/or stirred.