With Krypton debuting on Syfy March 21, all eyes are turning to Superan's home planet. I'll be writing something about it, but right now I don't know what. In the meantime, let's talk Krypton. What's your favorite Krypton story? Or tidbit? Or revamp? Or whatever?

As for me, I have more than a few comments and questions.

* Every time I read a story about the Thought-Beast, I wondered what kind of evolutionary advantage could possibly come from advertising your thoughts on your forehead.

* I know Krypto had to get to Earth somehow, and no doubt the writers simply took the most expedient route. But even as a child I thought Jor-El sending Krypto into space as a test animal was cru-el.

* Commander Benson has a three-part kryptonite series on this site that is required reading.

* Speaking of kryptonite, I remember green, red, gold, blue, white, jewel, x-kryptonite (Streaky) and anti-kryptonite (Argo City) from the Silver Age off the top of my head. And silver and black came along post-Crisis. (I do not count pink kryptonite, which Peter David mentioned in order to make a gay joke in his Supergirl run.) Oh, yeah, there was red-green kryptonite, but I've forgotten why I know that.

* If I were living in the Bottle City of Kandor, I think I'd rather take my chances outside where I'm invulnerable, no matter how tiny. Inside the bottle I could die slipping in the shower.

* When was Rokyn established? Was that pre-Crisis?

* whenever I think of the legions of people who visited Krypton before it exploded via time travel, this is always the story I think of first. 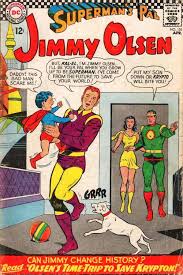 Way to turn the central tragedy of Superman's life into a punchline, DC.

* Who else visited Krypton? Lar Gand, of course, but it wasn't by time travel. Brainiac was also a pre-explosion tourist. Superman famously went back in time and dated Lyla Lerrol, but I'm sure there have been more occasions than that, although none are occurring right now. Lois Lane tried to date Jor-El. (Ew!) Lex Luthor did, or maybe he did -- now that I think about it, I think it was an Imaginary Story. Did Lana Lang ever make the trip? Superboy? Supergirl? I'm drawing blanks, although I'm pretty sure returning to Krypton was practically a cottage industry in the Silver Age.

* There was a Superboy story once where he found Lara and Jor-El alive and well, but by the next issue they were gone. I don't remember the particulars now. Were they meant to return, and then some editor thought better of it? I feel like I should set alight the Mopee-Signal.

* After Rokyn, were there any other in-continuity embiggenings for Kandor? I know there was the fairly recent war between Krypton and Earth, when Zod and company were on a planet on the other side of the sun, but I don't remember how they got there. Allura was there, too, and I think Zor-El was, but got killed.

* Other major Krypton stuff comes from the two World of Krypton miniseries (one on either side of the Crisis) and the Krypton Chronicles mini. I think those established that Jor-El's father's name was Jor-El also. On TV he will be Seg-El, which sounds familiar but I don't know why.

What Krypton stuff is rattling around in your heads?

Permalink Reply by Jeff of Earth-J on March 5, 2018 at 2:57pm
Don't forget some of the more recent stuff such as the New Krypton Special, the World of Krypton mini-series and the Last Stand of New Krypton crossover and mini-series which spanned 2008-2010.

Yeah, isn't "Last Stand on Krypton" the one where it's on the other side of the sun, with Allura Zor-El as the leader, and Zod agitating for war with Earth (which he got)? And Zor-El gets killed? I could be mixing that up with another story, though.

DC is putting out a Superman: The Many, Many Worlds of Krypton trade either this week or next!

What always fascinated me about Krypton was the numerous times they added to Jor-El's lifestory, so much so that the first World of Krypton mini was devoted to making sense of it all. And they deleted a lot like Jimmy, Lois and Luthor all visiting Krypton.

In fact, in Super Friends #17, Batman, Robin and Wonder Woman go to Krypton on the day it explodes to rescue a time-lost Jayna of the Wonder Twins. They encounter a rebellious Lyra Lerrol but are unable to rescue her, to Lois Lane's relief.

As for Rokyn, I think that it was first mentioned in a Legion story from Adventure Comics #356 when Brainiac 5 mentioned as being settled by people from Kandor.

And the Legion got into the act as well! 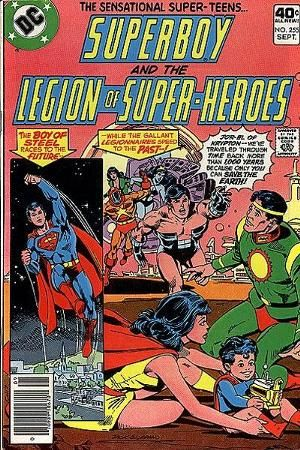 Permalink Reply by Doctor Hmmm? on March 5, 2018 at 3:26pm
That Cosmic Boy outfit never, ever gets old. Jor-El knows what I'm talkin' about.

Luthor went to Krypton specifically to woo and marry Lara Lor-Van, reasoning that if he was his father, Superman wouldn't oppose him -- thus showing a shocking lack of knowledge of how biology and psychology works. And it wasn't an Imaginary Story; it happened in Superman #170 (July 1964).

One of the greatest Imaginary Stories was "The Death of Superman" in Superman #149 (November 1961). Luthor is the culprit, naturally, and he is put on trial in Kandor. He doesn't even bother to mount a defense. Instead, he offers the Kandorians a deal: Set me free and I'll enlarge the bottle city.

Smug, Luthor is sure they'll agree, but the judge declares, "We Kandorians don't make deals with murderers! Executioner, send this wretch into the Phantom Zone, immediately!"

When he saw Cosmic Boy and Shadow Lass racing towards him, Jor-El's first thought was "But it's not my birthday!"

That Cosmic Boy outfit never, ever gets old. Jor-El knows what I'm talkin' about.

Superman enlarged Kandor on a red sun planet chosen by the Kandorians in Superman #338 (1979). The Kandorians deliberately picked a world that's only intermittently present in our dimension, and it leaves ours at the story's end.

Superman and Supergirl learned the Kandorians named the planet Rokyn when they returned there in the mini The Krypton Chronicles (1981) (a fond memory for me). I originally wrote that was when the name was introduced, but Philip is right on that point.

In Superman #338 the city crumbles to dust after it's enlarged. In The Krypton Chronicles Superman and Supergirl learn this only happened to the buildings made of a modern material.

The climax of Superman #338 reminds me of Superman #158, where Kandor is briefly enlarged and the city and the Kandorians nearly disintegrate. Earlier in #338 Superman and Supergirl accidentally turn Brainiac's shrinking ray on Brainiac, and he shrinks into nothingness. The sequence was likely based on Brainiac 5's account of Brainiac's fate in the Supergirl story in Action Comics #276.

"Superman's Day of Truth!" from Superman #176 introduced the idea that Krypton was conquered for a period by the Vrangs.

"The Fabulous World of Krypton" shorts appeared in Super-titles in the 1970s and 80s.

To Luke: the Rokyn name was from Adventure Comics #356 as a known settlement of Kryptonian descendants. Also, the "final fate" of the original Brainiac was from yet another Legion story: Brainiac 5's first appearance in Action Comics #276.

The robot teacher from Krypton that got Superboy laid and also tried to gaslight Supergirl might be worth a mention.

There was a Superboy story once where he found Lara and Jor-El alive and well, but by the next issue they were gone.

That was Superboy #158, but I've never read the story. I think they couldn't be revived without dying.