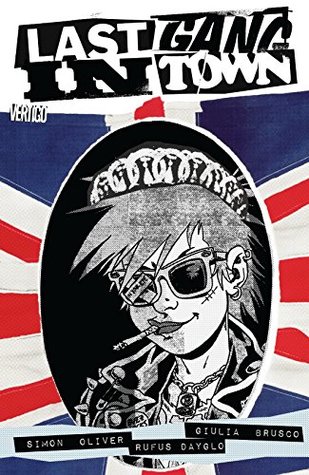 The main action in this miniseries takes place in London, in 1977. It's the era of punk rock, and the opening scene finds a trio of punks ripping off equipment from the band Pink UFO (probably modeled on Pink Floyd, the sort of establishment rock stars that punk was reacting to) so they can play a gig that evening. They make off with the goods, but not without a mad chase escaping the band's roadies. At this point there is a brief flash forward to 2018, which does not mean much until later in the story.

An upper crust would-be seditionist named Ava recruits two of the punks (along with a third who exhibits a similar attitude) to form a criminal gang. They earn their title of "last gang in town" by virtue of being the first (and last) organized crime since the passing of famous British gangsters like the Kray brothers. Britain is about to celebrate the Queen's Silver Jubilee, and it turns out that Ava has an ultimate goal: to steal the Crown Jewels, the biggest possible score, and the one with the greatest symbolic value.

Eventually her true motivation is revealed: she had been in love with a dashing thief who disappeared attempting the same heist. In the end they are caught in an outlandish, convoluted trap and exiled to France (the depiction of the Queen of England is positively thuggish). Meanwhile, back in 2018 (there have been a series of flash forwards, in dialog with the 1977 events) recently deceased Ava has called the gang together for one final act. They are taking on the global one percent by taking out their Currency Unit Manipulator, an orbiting A.I. system that maintains the wealth of the super-wealthy. This brings the story solidly back to the present, although the action is no more believable.

I can't say I completely enjoyed this: it's too convoluted for its own good, and didn't really make sense until the end. It certainly had the punk attitude, though. Rufus Dayglo's art makes explicit reference to underground comix, and his character designs delight in extreme caricature. I love his little notes and cartoons in the margins, which frequently make reference to alternative music (of more recent vintage than punk rock).

I read it issue by issue, so if the story didn't quite cohere, that didn't register with me with the months between books. But I really enjoyed this one -- the punk attitude, the Dayglo art, the cheeky marginalia. It felt like the most freewheeling thing Vertigo had published in ages, and I really cherished it for that. That said, its energy was less Vertigo and more Mad Magazine or Bongo Comics -- rollicking, joke-a-minute stuff.

Don't know that one!

Not "The Dingbats of Danger Street," then? :)

If you don't mind the threadjack, "Dingbat Love" (from TwoMorrows Publishing) reprints the last of Jack Kirby's 1970s DC output, never before published. Along with Soul Love (a.k.a. True Divorce Cases), which would have been along the lines of the In the Days of the Mob and Spiritworld magazinbes, Kirby prepared a total of three issues of a humorous kid gang feature, "The Dingbats of Danger Street." The first issue appeared in First Issue Special #6, but the other two have remained unpublished... until now.