Whether the Bat-Cat union will actually happen is anybody’s guess – hey, it’s comics, after all. Marriage used to be every superhero’s kryptonite, but things have gotten less predictable on that front in recent decades. Superman is currently married (with a 12-year-old son), and Aquaman’s engaged. On the other hand, Fantastic Four – where Mr. and Mrs. Reed Richards are the beating heart of the series – isn’t being published currently. And Spider-Man used to be married, but a devil named Mephisto erased his marriage from reality. Of course Batman goes down on one knee, under the romantic light of the Bat-Signal.

What this proposal does – and that’s all it is, so far, since Selina hasn’t answered – is bring to mind the first time these two crazy kids got hitched. It was a terrific story.

Don’t remember it? That’s because that marriage got erased, too, along with the world on which it happened, a world called “Earth-Two.”

This is the point where I normally start explaining DC’s multiverse, and how there are lots of different versions of lots of familiar characters on lots of parallel worlds in lots of parallel dimensions that vibrate at a different frequency but occupy the same space. Hopefully enough readers have watched “The Flash” on The CW that I don’t have to do that any more.

But “Earth-Two” wasn’t just any parallel Earth in DC’s cosmology. From 1961 to 1986 it featured, literally, the company’s original superheroes, the ones created in the 1930s and ‘40s.

That’s because most of today’s familiar DC superheroes are version 2.0 (or later). In the late 1950s and early 1960s DC created new versions of Atom, Flash, Green Lantern and Hawkman – characters that had been out of print since 1951. Aquaman, Green Arrow and Wonder Woman were granted new origins, and even Superman and Batman got a makeover.

Then, in a burst of genius, editor Julius Schwartz and writer Gardner Fox created a 1961 story called “Flash of Two Worlds.” That tale established that all of DC’s then-current heroes occupied a world called “Earth-One,” while the original versions still existed – a little older, a little slower – on a parallel world called “Earth-Two.” 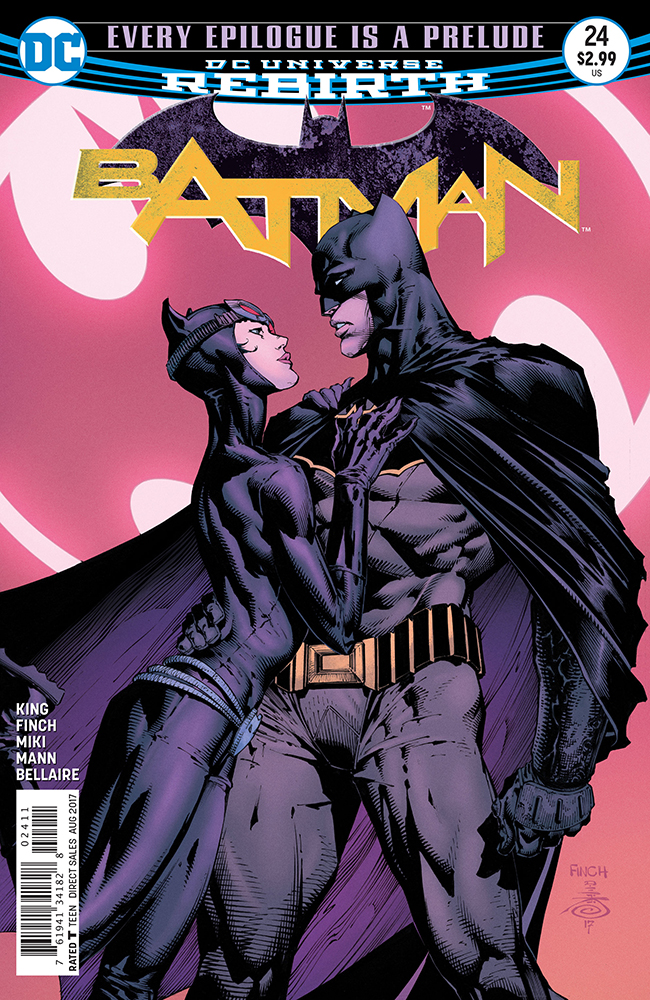 Batman #24 may be hard to find, but a second printing arrives June 21.

So in 1961 we learned the original Batman, the one that debuted in Detective Comics in 1939, was not only different from the Batman we know, but still around (sorta). Various 1960s stories established that Earth-Two Bruce Wayne had retired as Batman, and become Gotham City’s police commissioner. Because of course.

Then came the good part. In 1977, we learned that Bruce-Two had gotten married – to Catwoman! And that union spawned a daughter, Helena Wayne. But it was in this self-same story, titled “From Each Ending … a Beginning!”, that Selina Kyle was killed, after being blackmailed about her criminal past.

Unwilling to drag her husband’s name through the mud, Selina agreed to “one last job” for a guy named Silky Cernak, which of course, attracted Batman for one last case. In the ensuing kerfuffle, a stray shot took the last of Selina’s nine lives.

This tragedy prompted daughter Helena to take up the family business as a new superhero, The Huntress. But really, who cares? It was The Bat and The Cat readers wanted to know about.

In retrospect, the two always did have a sexual tension, going back to Selina Kyle’s first appearance in 1940. That story ended with Batman “accidentally” blocking Robin’s attempt to catch her.

“Say,” remarks the puzzled Boy Wonder. “I’ll bet you bumped into me on purpose! That’s why you took her along with us – so she might try a break!”

“Why Robin, my boy, whatever gave you such an idea,” muses a smitten Dark Knight. “Lovely girl! What eyes! … Maybe I’ll bump into her sometime.”

That began something of a pattern until Catwoman reformed in 1952. And then un-reformed in 1954, but the two Cat-stories from that year have kinda slipped into limbo, because Catwoman herself disappeared after that year. The draconian Comics Code was instituted in 1954, and nervous DC editors evidently considered Selina Kyle too, you know, suggestive. Well, until Julie Newmar brought the sexy back in the  Batman TV show 12 years later. But that’s another story.

On Earth-Two, though, Catwoman never un-reformed, and that’s who married Bruce Wayne until her death. Not that Bruce had much time to mourn – his death was chronicled two years later, due to the schemes of Frederick Vaux, the Earth-Two equivalent of Justice League villain Felix Faust.

Fortunately, that’s not the end of the story. In 1983 writer Alan Brennert bestowed upon fandom one of the most romantic, affecting stories in Batman’s history. “The Autobiography of Bruce Wayne!” allows us into Wayne’s head as he records his history with Catwoman after her death but, obviously, before his own.

We see the two battling The Scarecrow, whose fear toxins have accentuated their natural terrors. For Catwoman, it’s being helpless. For Batman, it’s being alone. As he sinks into madness, it’s Selina who pulls him out of it, by assuring him he never will be alone – not while she’s alive. Her love does the trick, and Batman not only defeats the fear toxin, but: 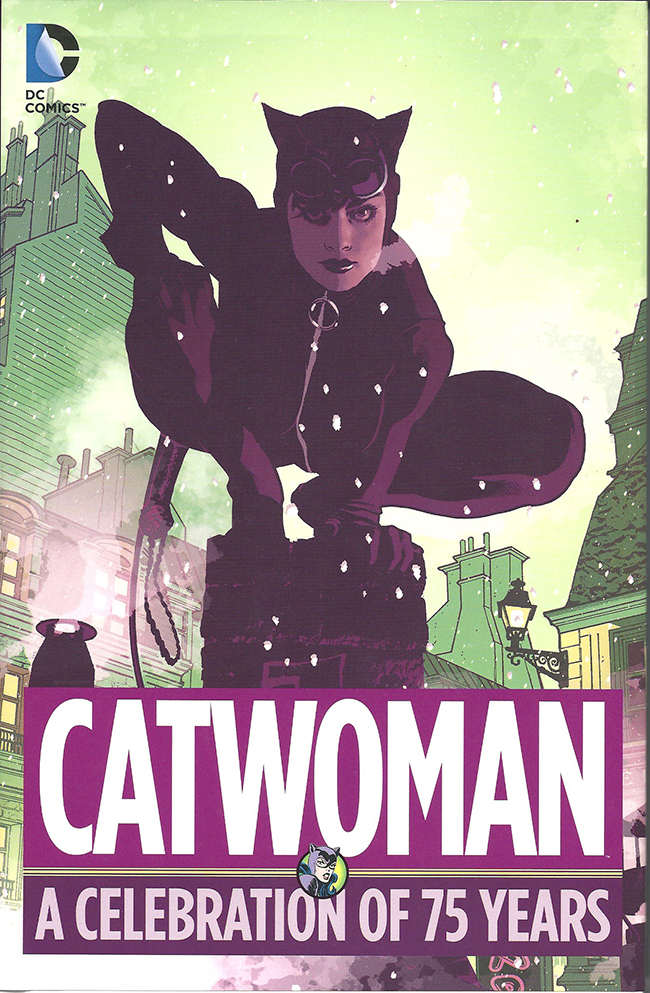 Catwoman: A Celebration of 75 Years from 2015 reprints several of the most important Earth-Two Batman-Catwoman stories.

“I found and captured The Scarecrow, of course,” he writes. “But more important … that night I found Bruce Wayne. And I found the woman who would share my life for the next twenty years.

“She’s been gone now, for many months, but it still seems impossible to me. Her death was pointless, tragic … but I have long since given up trying to find meaning in death. The meaning is in life, not death … and Selina’s life was as full of meaning as it was of love, and spirit, and courage.

“And when my time comes to join her … I would only hope the same could be said for me.”

Seriously, are you not tearing up just a little? No? Art thou made of stone?

But that really was the end of the story. In 1986 DC eliminated all of its parallel worlds (before bringing them back 24 years later). Earth-Two and all of its inhabitants have gone down the memory hole, replaced in 2011 with Earth 2. That parallel world also had a Batman married to a Catwoman, but that lasted all of one issue, where Batman was killed. The name “Batman” has been used by three other characters in the Earth 2 series, none of which (it seems safe to say) are married to Catwoman.

Although, after the successful Earth-Two stories, Batman marrying Catwoman isn’t really a shock any more, and happens now and again in one parallel world after another. The Huntress of the TV show “Birds of Prey” was once again the daughter of the Dark Knight and the Feline Fatale, although it’s unknown if they were officially married. Alfred pens a fanfic of the two getting married on the “Knights of Tomorrow” episode of Batman: The Brave and the Bold, and Bruce Wayne is engaged to Selina Kyle in a dreamworld created by The Mad Hatter in the “Perchance to Dream” episode of  Batman: The Animated Series.

And that’s not to mention the couple of stories set during the golden age of piracy, where Captain Leatherwing of the Flying Fox (ha ha, get it?) battles the pirate “Laughing Man” and marries Capitana Felina of the Cat’s Paw. Yo ho ho, indeed.

But thanks to Brennert’s 1983 tale, it is the Earth-Two Bat-Cat nuptials that remain the gold standard. Batman may have popped the question, but it’s Batman writer Tom King who has the most difficult task ahead, beating the ghost of one of the most beloved Bat-stories ever.

It's not important to your story, but in the Birds of Prey show Catwoman and her daughter were both metahumans. Were either of them ever portrayed this way in the comics?

King has been doing that all along during his tenure on the title. Every time Batman and Catwoman reminisce, one remembers one story, and another remembers another story. They're both real Batman stories, but different ones. I haven't double-checked to see if there's an Earth-One/Earth-Two dichotomy, and if so, if it one character remembers Earth-One while the other remembers Earth-Two.

Or they both had spotty memories with different holes?

As much as I enjoyed King's Vision, I haven't been reading his Batman, although I've heard nothing but good things about it. Truth is, I just don't feel any connection to this version of the Batman, or any other other DC character for that matter.* I had been reading Action Comics, but I felt let down by the ending of the duplicate Clark Kent arc.

*Oh, there's Bug. I like Bug. And Kamandi Challenge.

I just finished Vision ... it was pretty good, although it would have been better with a character he could actually make changes to. I hated that it had to go back to status quo (with the addition of Viv).

Luke Blanchard replied to Jeff of Earth-J's discussion Tales to Astonish
"I think this was where Marvel first used the "never ending story" approach."
1 hour ago

Richard Willis replied to Jeff of Earth-J's discussion T.H.U.N.D.E.R. Agents
"ISSUE #4: RAVEN: A hostage situation at the New York Stock Exchange, but the "hostage"…"
2 hours ago

Jeff of Earth-J replied to Jeff of Earth-J's discussion T.H.U.N.D.E.R. Agents
""This was me trying to be funny." I thought that might have been the case but i…"
5 hours ago

Jeff of Earth-J replied to The Baron's discussion Movies I Have Seen Lately
"DR. NO: I'm gearing up for Cap's book/movie discussions, but he's following book…"
5 hours ago

Jeff of Earth-J replied to Steve W's discussion Comical Comic Cuts
""Can anyone come up with a caption?" I can go you one better. Here's the…"
9 hours ago

Richard Willis replied to Jeff of Earth-J's discussion T.H.U.N.D.E.R. Agents
"Captain Comics said: I think the Companion works best as something to read. A lot of mini…"
9 hours ago

Richard Willis replied to Jeff of Earth-J's discussion T.H.U.N.D.E.R. Agents
"Jeff of Earth-J said: I suspect that another scene was intended for pp.11-12 and was dropped at…"
9 hours ago

Steve W replied to Steve W's discussion A Cover a Day
"I'm with Jeff and Peter for April and May."
10 hours ago

Steve W replied to Steve W's discussion Comical Comic Cuts
"Ok, so this pic doesn't actually have any script to go with it, but I still thought it funny.…"
10 hours ago