Lazarus: The First Collection by Greg Rucka and Michael Lark 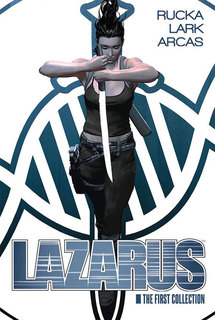 I read the first arc of this series over a year ago, in electronic form. This collects the first two arcs (Issues #1-9) in a beautiful oversized hardcover. So I decided to start from the beginning and reread the first arc. Wonderful bit of world-building here. Rucka imagines a dystopian world which has suffered an economic collapse. Everything is now run by rich families rather than governments (although governments still exist). The only people who really count are family members, followed by the serfs in their service. Everyone else--the vast majority--are called "Waste," with all the disregard for their lives and welfare that term implies.

The first arc, "Family," introduces us to the Carlyle family, and their Lazarus Forever ("Eve") Carlyle. The Lazarus is a nearly unkillable biological construct that serves as the family bodyguard and protector. During the first arc we meet another Lazarus--Joacquim Morray of the Morray family--and see first-hand just how hard they are to kill. The story also reveals the intricacies of family politics, as two of the Carlyles engage in an unsuccessful treacherous plot.

The second arc, "Lift," focuses on a Waste family as they attempt to be elevated to serf status. A Lift is a periodic testing process in which members of the Waste population can apply for serf status, which involves a physical examination and a series of tests. Things are further complicated by a group of Waste terrorists who nearly succeed in setting off a bomb at the Lift. And the Carlyle family subversion continues to be a subplot, which should certainly bear fruit as the series progresses.

The collection concludes with a great deal of background information about this world. Each of the sixteen Families is profiled: we've only seen four so far, only two of them in any detail. There is a detailed timeline of the worldwide economic collapse and the rise of the Families. This is actually a good place for it. Rucka and Lark throw the reader into the new world with enough background to understand the story. All this background would not have been nearly as involving if I wasn't invested in the characters. That is one of the strengths of the series. It projects a believable future from current events, depressing though it is. But the interesting, well-developed characters keep the story focus personal.

Read this today and agree with everything you said Mark. This is really good stuff. Fully realized and fascinating. In the past I never really understood what people were responding to with Rucka but he has really hooked me with Lazarus. This has TV adaptation written all over it.

Glad you liked it, 'Tec! I've liked a lot of his stuff, but the one most like this is Stumptown, which I would recommend to you. I need to get to the second collection of it myself.

I enjoy his prose writing as well, especially the Atticus Kodiak series (Atticus is a bodyguard, which gives them a unique perspective).

I will definitely check out Stumptown.

Btw, I saw in the letters page of a recent issue that they've sold Lazarus to Hollywood so hopefully we will see something in the near future.

Lazarus is a terrific book. An new issue came out this week, and it's as strong as ever. I need to sit down and read all the backmatter; it appears in every book, but I never really have the focus for it when new comics day rolls around.

Actually, going back and reading the first few arcs again would do me good. Things have gotten pretty intense in the last half-dozen issues or so, and getting reintroduced to all the players would be a definite plus.

I've yet to read Stumptown -- I think I bought the first run on Comixology, but I didn't have my tablet yet so it just sat there -- but I love the Kodiak novels. And Alpha was one hell of a beach read for me last year!

I still haven't read Lazarus, even though I have three volumes of it!

But I heartily add to the glowing recommendations of Stumptown, at least the first two volumes worth, which I have actually read.