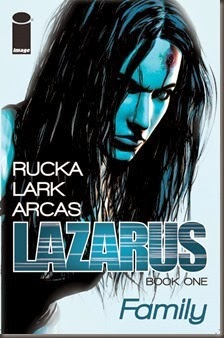 Writer Greg Rucka and artist Michael Lark depict a dystopian future in Lazarus. I'm going to borrow the cataloging summary to describe the setup: "In a dystopian near-future, government is a quaint concept, resources are coveted, and possession is 100% of the law. A handful of Families rule, jealously guarding what they have and exploiting the Waste who struggle to survive in their domains. Forever Carlyle defends her family's holdings through deception and force as their protector, their Lazarus." In the first couple of issues there has been no explanation given for the situation, but there is clearly a huge disparity between the haves and have-nots. There are actually three classes of people: Family members (a small group of people with absolute power and control over all resources); Serfs (a larger group who serve the Families directly); and the Waste (unaffiliated people, the vast majority of the population).

Forever (Eve to her friends) really is a Lazarus. In the opening scenes she is killed quite thoroughly, yet within minutes she rises up and kills her attackers. She is conflicted about her assassin's role, which is a concern for the family, because she clearly is a tool above all else. The family members are a bickering, unattractive bunch, and from the hints they drop it appears that Forever is actually a clone. Her membership in the family is a fiction everyone maintains, but she is actually genetically designed to take orders from family members.

So they are concerned when she is sent on a secret mission, which she refuses to reveal. At the end of the second issue (of four in the collection) she meets with the competing Family Morray, alone.

I have this book, and have always gravitated to something else when I had time  to read. That's not as bad as it sounds when you realize I have time for about 3-4 books a week, but I have four knee-high stacks of unread books from which to choose! I am never going to get to those Miss Fury collections ...

Anyway, maybe the discussion here will enflame my curiosity and Lazarus will move to the must-read-now pile!

There is potential for violence in the situation--and there is a brief incident--as Forever is initially treated like a prisoner. But she swiftly shifts to guest status, as she has come as a representative of Family Carlyle, sent to negotiate with Family Morray. The negotiations go well, but in the process it is revealed that Jonah (the youngest Carlyle son) has been colluding with Morray. Back at the Carlyle compound, Jonah and his sister Johanna plot to assassinate Eve on her way back from the meeting, to instigate the war they think is necessary.

The assassination attempt fails, of course. In the process it further cements Eve's friendship with Joacquim Morrary, the Morray Lazarus. I'm sure this will factor into future stories. Jonah escapes with his life, but Johanna has double-crossed him and placed full blame on him for the plot. This, too, will no doubt be a factor in the future.

Rucka and Lark have come up with a unique twist on the dystopian future story here. The political intrigue plays like a medieval monarchy (no doubt the term "serfs" was carefully chosen), but the setting also allows for commentary on the current world economy. It's nice to read a comic series that moves so quickly, also. All of this happened in the space of four issues. The collection also includes a four-page Prequel story that illuminates the relationship between Forever and her father.

I'm really enjoying Lazarus... and am particularly curious about who's been sending her the secret messages she's getting. We're most of the way through the second arc in the floppies, and we've seen a lot more of the larger world because of it -- as well as more of Forever doing her job, and the training she underwent as a child. It continues to be a heck of a good read.

Does the trade have any of the extensive backmatter printed in the single issues? I wouldn't expect the lettercolumns, but there are timelines and other materials in the back of each issue -- which could be intended as a bonus for the monthly reader.

I was actually reading the electronic version (a DRM-free copy I got from that Humble Bundle offer, which may still be available). This was the first review I've done from an all-ecomic collection. But since it included the Prelude story (and a summary of the world of the series at the very end), I'm assuming those were the only extras in the trade, as well.

Anyway, maybe the discussion here will enflame my curiosity and Lazarus will move to the must-read-now pile!

It involves 2/3 of the creative team from Gotham Central. That should be enough.