Let the Punisher fit the story: The many (weird) versions of Frank Castle

When Marvel’s The Punisher drops at Netflix Nov. 17, rest assured that what’s on screen will be the best of the many versions of Frank Castle that have appeared in the comics.

Frank (né Francis Castiglione) at his core is a fairly generic character, with more than a passing similarity to Don Pendleton’s Mack “The Executioner” Bolan. As an archetype without much of a personality, Frank has always been fair game for ambitious writers to stretch his concept – and the reader’s credulity. As a result, Frank has been presented in some mighty strange ways.

Completely ignored today is a short period in Frank’s publishing history when he seemed to embrace the “broken windows” theory with – as usual – a vengeance. That’s the idea that links little crimes like vandalism with more serious crimes, due to theoretical a rise in incivility and respect for law.

“Crime, if left unpunished, breeds further crime. A man’s crime of battery against his wife today … makes him capable of committing a crime against others tomorrow. I can’t allow that escalation.”

As good as his word, Frank shoots a wife-beater. And a cab driver who runs a red light. And a litterer. “Littering is a crime against society,” he thinks, as he sprays the street with an automatic weapon.

If you think that’s crazy, you’re not wrong. Two issues later, a judge declares Frank insane, which explains this weird divergence from his regular modus operandi. Better yet, by Frank’s next appearance this storyline had dropped down the memory hole completely.

In a 1980 story, Spider-Man discovers Frank using rubber bullets against mobsters. It’s entirely likely that this story was simply a case of Marvel getting cold feet about a “hero” who is a merciless killer.

We used to be so naïve, y’all.

Frank was back to using real ammo soon enough. Even so, The Punisher has since used rubber bullets for plausible, in-story reasons on other occasions – specifically when the character is forced into team-ups with superheroes like Spider-Man or Daredevil. I mean, it’s weird enough that these “nobody dies on my watch” types haven’t gone all out to put The Punisher behind bars (or in a psych ward). So Frank’s careful around them. He doesn’t force them to act by displaying his homicidal inclinations under their costumed noses.

“For Frank to exist in the [Marvel Universe] and do what he does, he’s got to stay below the radar,” writer Greg Rucka explained in a 2012 interview with CBR.com. “I think for Frank to survive, he’s got to know that. He’s got to know that if he keeps his profile low, Thor is less likely to come and hit him on the head with his hammer because Thor is going to be busy hitting other people with his hammer who are trying to eat the Earth.” The Punisher became a demon-hunter in a short-lived experiment.

In 1998, Frank had been dead for a while, but was resurrected. (That happens more often than you’d think.) He was returned to life by an angel – the guardian angel of Frank’s family, who had failed at his job and was seeking redemption.

Gadriel, as he was called, gave Frank heavenly weaponry that he could summon from inside his trenchcoat, plus glowing red eyes, resistance to all injury (including bullets and Wolverine’s claws), an Aramaic symbol on his forehead and a new mission. Frank doesn’t seem to mind.

This version lasted a total of eight issues – a four-part miniseries, then a second one guest-starring Wolverine. Because it was the ‘90s, when Wolverine was in everything. 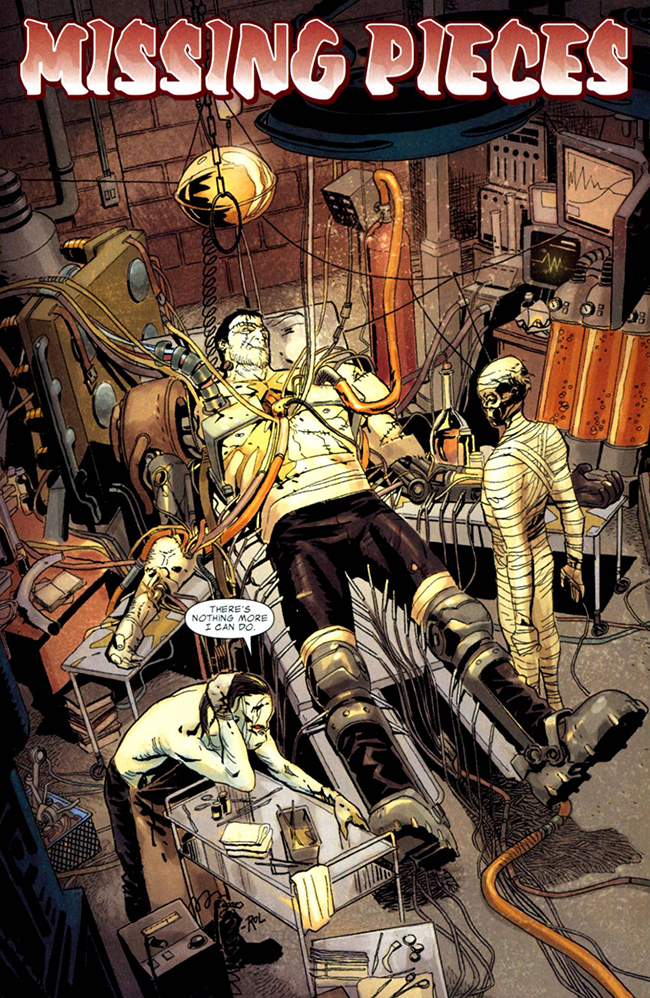 That’s Morbius, the Living Vampire (left) and N’Kantu the Living Mummy (right) building Franken-Castle out of The Punisher and some spare parts.

In 2009, Frank was killed and resurrected. (See, I told you that happens a lot.)

Frank had been killed by Logan’s son Daken, who used his Wolverine-like claws to dismember and decapitate him. Luckily, though, his dead parts were reassembled and brought back to life by Morbius, the Living Vampire, who was hiding with the Legion of Monsters in the sewers under New York City, and given hydraulic limbs and gigantic guns to defend the Monster Metropolis from monster-hunting samurai and Nazi zombies led by a mummified skeleton named Hellsgaard, who sought revenge on all monsters because his family was killed by werewolves.

I hope that sentence was as much fun for you to read as it was for me to write.

This updated version of Frank was immediately dubbed “Franken-Castle,” which eventually became the name of the book. But obviously it didn’t last. Two months after the last issue of  Franken-Castle,” Frank was back to his old self in a new series.

Needless to say, he doesn’t talk about this much.

Some Punisher stories aren’t “canon” – that is to say, they take place out of the regular history of the character, but use the same basic premise. They can be a little, um, over the top. 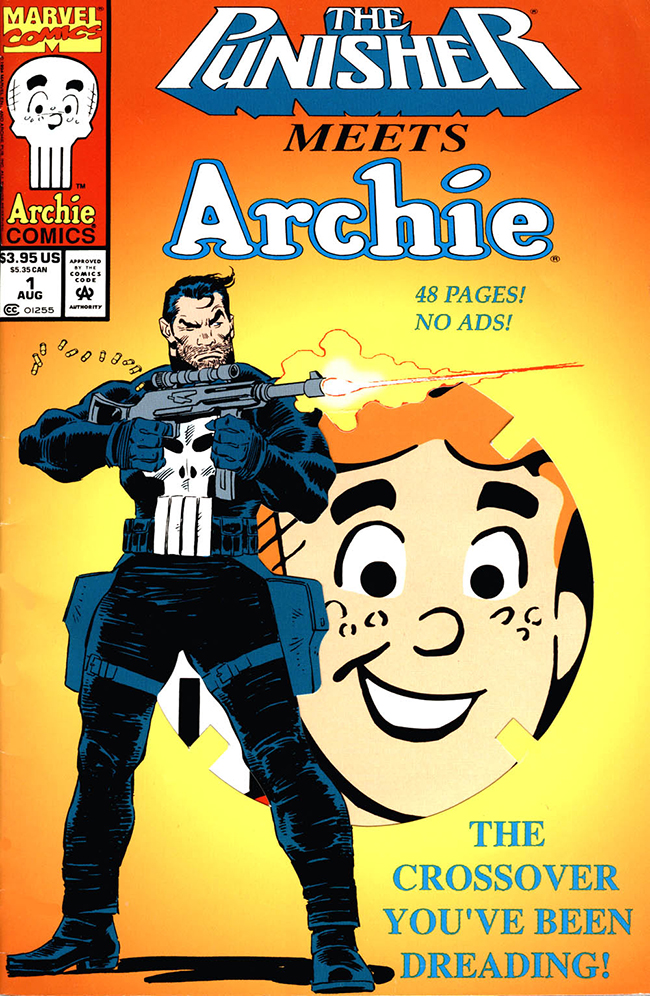 Yes, The Punisher teamed up with Archie in “the crossover you’ve been dreading!”

* Archie Meets The Punisher (1994): Frank pursues a criminal to Riverdale who bears a startling similarity to Archie Andrews. Hi-jinks ensue.

* Batman team-ups: Frank met Batman at rival DC Comics twice in 1994 – but not the same Batman. In Punisher/Batman: Deadly Knights, he teamed up with the Bruce Wayen version. In Batman/Punisher, he met a fellow named Jean-Paul Valley, who filled in as the Dark Knight when Bruce’s back was broken by Bane. (Spoiler: He got better.) 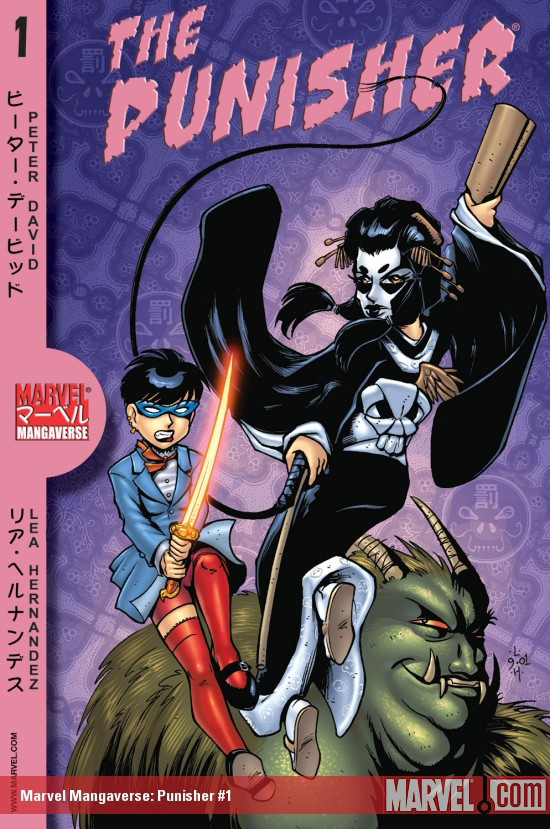 In Marvel’s mangaverse, “the paddling Punisher” is Tokyo’s kinkiest superhero.

* Marvel Mangaverse: Punisher (2002): Marvel tried its hand at manga-style comics using their traditional characters in the early aughts – and let’s call the results mixed. In the mangaverse, The Punisher isn’t even a man – she’s Sosumi Brown, a girl’s school principal by day who becomes “the paddling Punisher” at night. She’s called “Tokyo’s kinkiest superhero,” because she eschews firearms for more interesting forms of punishment, such as whips, spanking and tickling a crime lord’s feet with a feather. As you can imagine, this version only lasted one issue.

* Punisher Kills the Marvel Universe (1995): The set-up of this one-shot is that Frank’s family gets killed not by the mob, but as collateral damage in a superhero-supervillain battle. Naturally, this inspires Frank to murder everyone in a costume. Highlights include shooting Captain America in the back, dropping a nuke on the X-Men and killing Dr. Doom with a sledge hammer to his metal face mask (“Klang Klang Klang Squitch”). Not for the faint-hearted.

* Punisher: A Man Called Frank (1994): This one-shot features Frank in the Wild West. It’s exactly what you think it is.

All of the above should serve to make us grateful that Netflix chose to use the most enduring and popular version of Frank. That’s the one best exemplified by the 12 issues written by Garth Ennis and drawn by Steve Dillon in 2000-01, returning the vigilante to his pulpy, noir roots. It’s collected in a trade paperback titled Punisher: Welcome Back, Frank, and if you only read one Punisher story in your life, that’s probably the one you want.

Or you could wait for November, when Frank returns in a new series wielding the War Machine armor in his crusade against criminals. I kid thee not. Writer Matthew Rosenberg told Newsarama.com in August that the series is about what happens when James Rhodes’ Iron Man-style armor “falls into the wrong hands.”

And are there any hands wronger than those of Frank Castle?

Ah, yes, I remember the Mangaverse Punisher. Her secret ID was a lawyer, Sosumi ("So sue me", get it?) Brown, and her kid sister/sidekick was Hashi Brown. Yuk-yuk-yuk.

Edit: She wasn't a lawyer. Why did I think that?

That whole business about The Punisher blowing away litterers and traffic scofflaws was retconned away as him unknowingly being under the influence of drugs. That happened in that first, classic miniseries by Steven Grant and Mike Zeck in 1986.

I'm not a huge fan of the Punisher, but I recently bought the Punuisher omnibus which contains every appearance of the character up to and including the Grant/Zeck series. It's fascinating to see how the chartacter developed. I haven't begun to read it yet, but I did read the introductory material. Apparently Bill Mantlo wasn't a big fan of the chartacter and wrote that "shooting litterbugs" story as what he saw as a natural progression of the character. As Kelvin pointed out, that was overturned in the first limited series.

The worst version of the character (IMO) was the "avenging angel" persona from the first "Marverl Knights" series, which was also immediately overturned (with a line of dialogue) by the very next writer (I wanna say Garth Ennis...?).

I'm pretty sure it was Ennis.

Permalink Reply by Emerkeith Davyjack on November 4, 2017 at 11:40pm
...Three other non-616 versions of the Punisher - During the 00s, tbe Spider-Man newspaper strip had a Punisher guest-shot (With I think Mr. Hyde as the villian-villian?? Not sure.) presumably the only time Stan Lee ever wrote the character who rather symbolizes the post-Stan Marvel era! The story never showed Frank killing anyone or explicitly stating that he did, IIRC, in keepinh with the Silver-stylr Standards and Practices of the Spidey strip, though Frank might've been called " murderin' slime "...Thhe lazt shot of Frank in thr strip was as a pathegic figure crying over the snapshot of his family. The next-to-last Sunday strip of the story, IIRC, set up a cliffhanger whose resolution was not explained in the final basically for lack of a single word balloon, IIRC. If I joined the pay vefsion of KFS's Comics Kingdom would I be able to go back far enough and re-read this story?

I'm pretty sure it was Ennis.

Permalink Reply by Richard Willis on November 5, 2017 at 12:04am
The last time I checked you could go back for years, most of the time to a strip's beginning.

Permalink Reply by Emerkeith Davyjack on November 5, 2017 at 12:09am
...Marvel's AMAZING SPIDER-HAM had a version of Frank called the Punfisher - an anthomorpic fish who punished miscreants by bending them over his knee and spanking them!
Finally there was the Marvel Max 18-plus version of Frank - who gave the grown-up fanperson the adults-only contimgent they so yearned for by using actual, non-bl**p*d *ut curse words used by Frank! There on the page. Which the villians used as well, also using ethnic slurs, which Frank didn't use...Often directing those slurs towards other of their ethnicity, or ethnicities that no one in America much cares about hating, anyway...The Irish or the Welsh, say!

Permalink Reply by Emerkeith Davyjack on November 5, 2017 at 1:49am
...Thank you, Richard. Are you or have you been a member?

Once a year I give them a small payment; same with Go Comics. It's well worth it.

We mostly decided to just ignore the insults.

So how do they plan to explain the Punisher joining Stevil during Secret Empire?