'Locke and Key,' 'Katy Keene' both come from comics, but couldn't be more different

Feb. 20, 2020 — Two TV shows launched from the comics last week, one horror and one humor. Those are the official genres, but both shows are much more of a blend than that.

Locke and Key began life as a horror comic book at IDW in 2008, written by Joe Hill and illustrated by Gabriel Rodriguez. The series has since been collected in six books that contain the entire saga.

After a number of false starts, Netflix gained the rights to adapt Locke and Key and dropped the entire first season of 10 episodes on Feb. 7, 2020. But while the original comics are largely horror-driven, the TV show emphasizes the fantasy elements, and adds a ton of coming-of-age hoo-ha. TV Locke and Key gets creepy occasionally — usually thanks to Laysla De Oliveira’s character Dodge — but it isn’t nearly as scary as comics Locke and Key.

Netflix made some other changes from the comics worth mentioning — some minor, and explicable. Some not.

For example, in the comics there are two characters who murder (Spoiler), whereas on TV there is only one. That’s understandable, as a means to streamline the story.

And it’s easy to write off the change in venues, too. In the comics, the Locke family starts in San Francisco before moving to Lovecraft, Mass. On TV, they begin in Seattle and move to Matheson, Mass. It’s a mystery why the show felt the need to make those changes (aside from altering “Lovecraft,” which is a bit too on the nose), but not an important one. Welcome to Lovecraft is the first of six “Locke and Key” collections. (Cover art by Gabriel Rodriguez, courtesy IDW)

But there’s one other change that is utterly baffling. It is this: In the comics, Mother Locke has a problem that forces the kids — who are the stars, of course — to step up and take charge of the narrative. But the TV show removes that problem until almost the end of Season One, negating its usefulness to the story. So why include it at all? ‘Tis a puzzlement.

What’s not puzzling is the great job by Connor Jessup as high school senior Tyler Locke and Emilia Jones  as teenage Kinsey Locke. Even Jackson Robert Scott, as pre-teen Bode Locke, pulls his weight. I’ve just about had my fill of coming-of-age stories, but these young actors were likable enough to engage my interest — and sympathy.

Or maybe those characters feel so fresh because the show manages to free them from decades of predictable teen-angst cliché.

Normally in a story like this, the lead male will be a super-smart, somewhat alienated kid whose peers think he’s weird (e.g., Peter Parker). And any athlete will be a jerk who bullies the sensitive lead. Not in Locke and Key, where Tyler is a jock (he plays hockey), but isn’t a jerk. He’s neither super-smart nor sensitive (that seems to be Bode’s job), but is a thoughtful, decent guy dealing with unimaginable trauma.

Meanwhile sister Kinsey gets to toss away the traditional Ally Sheedy introvert act by magically removing her fear from her head. As a character who is quite literally fearless, she ends up almost an action hero, albeit one who makes impulsive, disastrous decisions.

All in all, I still have to go with the traditional “the book was better” stance. But Netflix’s Locke and Key is still well worth watching — it will remind you a bit of Stranger Things, although falling a bit short of that show’s awesomeness. 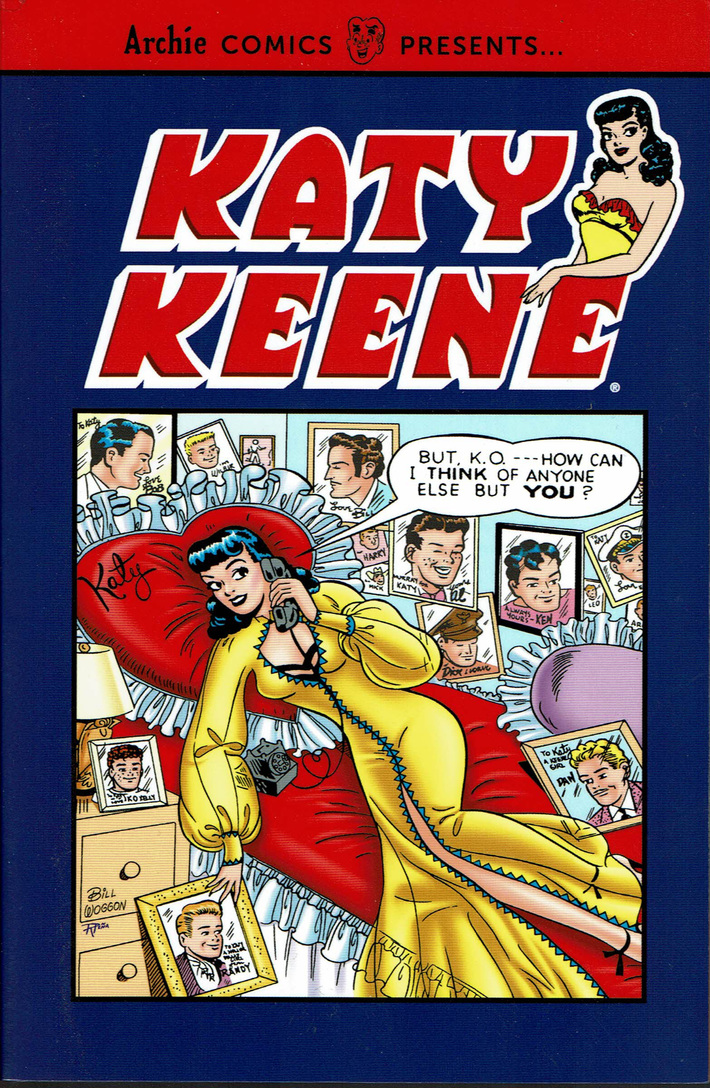 Meanwhile, Katy Keene launched on The CW on Feb. 6, the same network that features Riverdale. That’s significant, because both properties originated in Archie Comics.

But while Riverdale, for all its weirdness, maintains the basic structure of the long-running comics series it adapts, Katy Keene does not. Nor does it adhere faithfully to the various characters it lifts from yet another Archie comic book, Josie and the Pussycats. Instead, Katy Keene is like those two series tossed into a blender, with some extra seasoning from Riverdale High and a dash of Marvel’s Millie the Model.

Katy Keene launched in 1945 in the back pages of Wilbur Comics, which was another version of Archie Comics in everything but name. Katy, while also dabbling in the teen humor genre, added a couple of extra gigs: She was a working model, which gave creator Bill Woggon an excuse to put his star in lots of glamorous clothes, and also to use “working-girl humor” of the Tillie the Typist variety, which was actually something of a trend in the 1940s.

Katy had legs, if you’ll excuse the expression, if for no other reason than Woggon’s use of fashions designed and sent in by readers. This resulted in, according to TV/comics writer Mark Evanier in 2003, “an avalanche of mail.” Woggon also included paper cut-outs of Katy and her friends, complete with clothes to dress them in. So, by 1949 Katy graduated to her own book, which lasted until 1961. Since then she’s had some a couple of guest shots and comebacks — sometimes as a teenager, which she seems to be in current Archie comics.

But the Katy of TV (Lucy Hale) is very definitely an adult. She has a job in New York, and a live-in boyfriend, a boxer named K.O Kelly. That’s partly out of the comics — Katy did date a boxer named K.O., but also a rich fellow named Randy van Ronson, in the 1940s and ‘50s. Actually, Katy wasn’t exclusive to anyone, with Latinx airline pilot Ramon Ramirez and movie star Arnold Horsenlegger joining the cast, and Katy’s datebook, in the 1980s.

So we’re already diverging from “classic” Katy with the opening scenes in the TV show. And it just gets weirder from there.

In the comics, Glorida Grandbilt is Katy’s romantic and professional rival, whereas on TV Grandbilt (Katherine LaNasa) is Katy’s much older boss at Lacy’s Department Store.

In the comics, Pepper Smith was best friends with Josie from the outset of the redhead’s series in 1963, a cerebral girl with a short, black haircut who was dropped from the cast just before Josie transformed into Josie and the Pussycats in 1969. On TV she’s a platinum blonde gossip columnist in cat’s-eye glasses with more than a whiff of fake socialite Anna Delvey in her persona.

Speaking of Josie, the version from Riverdale (played by Ashleigh Murray) is a player in this ensemble, minus the Pussycats. In the first episode we also meet Alexander and Alexandra Cabot, ultra-wealthy siblings … who come straight out of Josie comics. Except that Alex’s longtime rival for Josie’s affection, Alan. M., is nowhere in sight. Alexandra, however, is just like in the comics: unpleasant.

Those aren’t the only refugees from Riverdale — and I don’t mean the TV show. Katy Keene introduces Cricket (Azriel Crews), who was introduced in Archie in 1962 as a Riverdale girl who could literally smell money. I doubt that angle will show up on TV. And there’s Trula Twyst (Emily Rafala), who is nothing like her comics counterpart, a Riverdale girl who was dedicated to making Jughead forget food in favor of females, for fear other males might follow his lead. 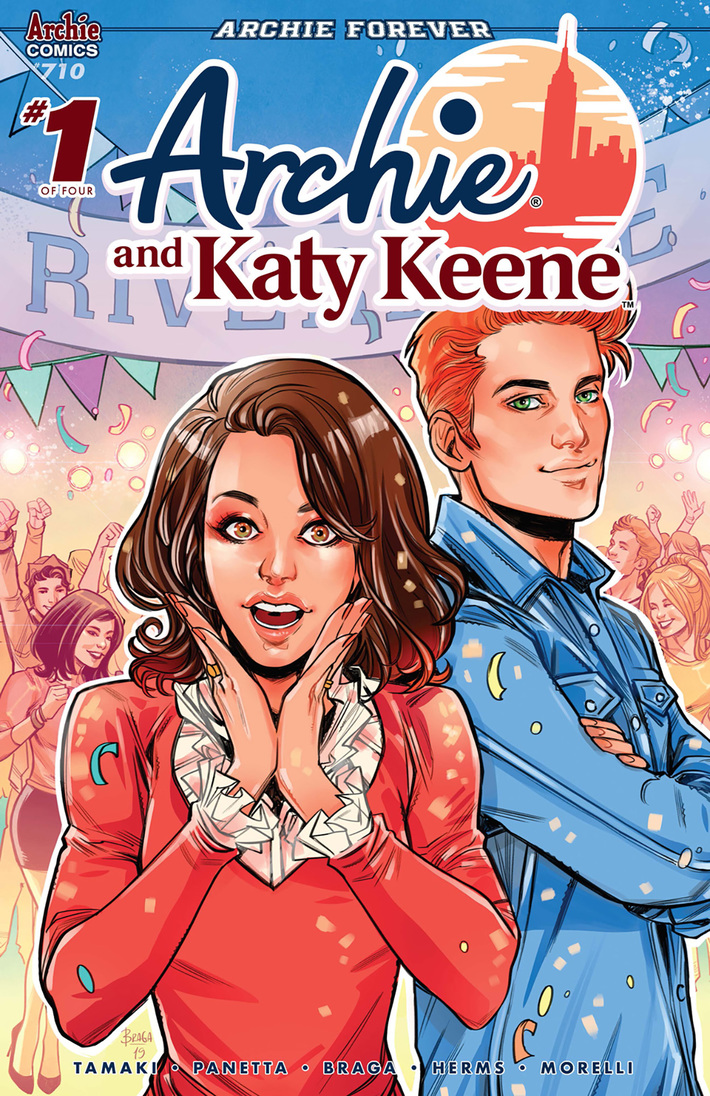 And that brings us to the most disturbing Riverdale transplant: Ginger Lopez. And not because he’s a drag queen.

Well, actually, I admit that is an unusual vocation for a TV character. But no, Ginger (actually Jorge, played by Jonny Beauchamp) is an odd pick, because there is already a Ginger Lopez in Riverdale – the same Riverdale from which Josie McCoy is from. So it’s the same universe. With two Ginger Lopezes, one a high school girl, and the other a drag queen.

And those aren’t the only Gingers. The original, a Latinx fashionista who first appeared in Archie Comics in the early 2000s, was originally a rival of Betty and Veronica, but that aspect was dropped. And there was the Ginger in Afterlife with Archie – a zombie apocalypse series – who was having a secret romance with another girl.

None of which matters if you like Katy Keene. I didn’t care for it, but then, singing, dancing and fashion aren’t my jam. If they’re yours, Katy Keene might be for you.

I really enjoyed Locke & Key, and thought it was true to the spirit of the comics. I read them so long ago that I barely remember the divergences you point out, which probably helps! I definitely plan to reread them sometime.

I'll confess to liking Kay Keene more than you do. It's a pleasant diversion; so far I haven't turned it off when it comes on.  I have zero history with the comics, so no confusion possible.