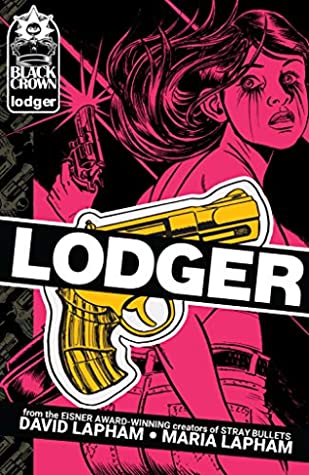 Lodger finds David and Maria Lapham in familiar black and white crime noir territory, a creative space very similar to their continuing magnum opus Stray Bullets. When Ricky Toledo was fifteen years old she fell for a handsome drifter who was renting a room in the family home--before he killed her mother and framed her father for it, sending him to prison. Armed with her trusty Smith & Wesson 45 named Golddigger she has been on his trail ever since, using hints from his travel blog called Lodger.

When the story opens Ricky is eighteen, and the twisted history is revealed gradually. We see her arriving in a town talked about in the blog, where she is quickly caught up in a series of extreme, sometimes violent events. It's a turbulent story that doesn't really make sense until the back story is filled in, but surges forward on sheer energy.

The killer is a charismatic character who charms men and women alike. He's also a master of disguise, which is visually confusing until almost the very end. This is the weakest aspect of the story: it's hard to keep track of the serial killer when you can't recognize him. It's as if he doesn't even recognize himself. Towards the end he confesses to Ricky that he just becomes what the person he is with needs. He can't become the character Dante that she fell in love with.

The time jumps in this story are similar to the ones often used in Stray Bullets. But since this is a five-issue miniseries they happens in a much shorter story telling frame, and there are no clear chronological cues. So the story can be quite confusing, in a way that does not seem intentional. Fortunately the Lapham flair for colorful characters with complex motivations is very much in evidence, making this an interesting (if flawed) read.

Every once in a while, Stray Bullets disappears for months at a time. sometime I don't even realize it's been missing until it comes back. This time I have been aware for some time that Stray Bullets has been missing, but somehow I missed Lodger entirely. I'll have to give it a look. thanks for bringing it to my attention.

I think this is a series that would definitely read better as a trade. Mark, you're 100% right about it being hard to follow. It was around issue 3 or 4, that I thought I had missed an issue. Still a pretty good read.