'Loki' season finale: A Kang by any other name would conquer just the same

July 22, 2021 — If you watched the season finale of Loki on Disney+, you may be saying to yourself, “Self, I sure wish I’d read the comics and myths this show is based on, so I would understand this gibberish better.”

Well, I have read the comics and myths. And they do help to a degree.

That comes right out of the original Norse myths. In those old stories, Sif has golden hair and is married to Thor. When Loki cuts it off (all of it, not just some), the Thunder God forces him to get the dwarves to create magical hair made out of actual gold for her to wear instead.

In the comics, Sif is depicted with raven hair, which is the version we see in the Marvel Cinematic Universe (as played by dark-haired Jaimie Alexander). All of that is combined in Loki episode 4.

Then there’s that frog dressed like Thor in a jar in Loki episode 5. In the comics, Thor is transformed into a pond-hopping amphibian in 1986, who then lifts Mjolnir in Thor #365 to become the Frog of Thunder. (That issue is referenced by the label on the jar, “T365.”) Thor was later restored, but another frog, a former human named Puddlegulp, finds a shard of Mjolnir that transforms him into Throg, the second Frog of Thunder. He continues to protect frog-kind to this day, with his own miniature hammer.

This comics event was referenced in the films, in the play-within-a-movie at the beginning of Thor: Ragnarok.

Actor Loki (Matt Damon): “Sorry about that time I turned you into a frog.”

Actor Thor (Luke Hemsworth): “It was a wonderful joke.”

Lastly, there were the many Loki variants who appeared in the first season, many of them in The Void at the End of Time. The majority were created out of whole cloth for the show, but several are straight out of the comics:

And in the original Norse myths, Loki was a shapeshifter who took the form of a woman on several occasions. Once he became a mare, was impregnated, and gave birth to Odin’s horse Sleipnir. No, I am not making this up. 2) “Classic Loki” (Richard E. Grant): This variant dresses in a cheap Halloween version of the armor/outfit Loki wore during his first few decades in comics.

Yes, there was a comic book titled Asgardians of the Galaxy. Moving on.

4) President Loki (Tom Hiddleston): Loki ran for president in a Marvel Comics miniseries in 2016, but didn’t win. Obviously, somewhere in the multiverse he did. 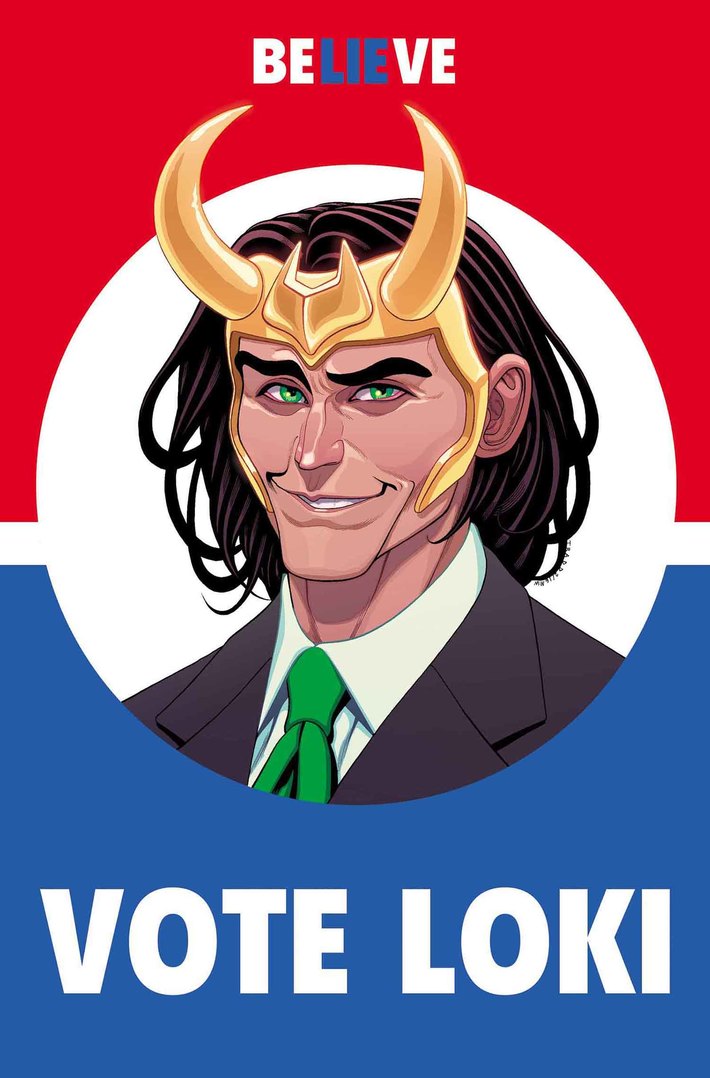 So, sometimes the comics inform Loki the TV show, or at least offer context.

But sometimes they only confuse the issue.

Take, for example, He Who Remains. When we first saw his residence at the end of episode 5, my comics-trained brain reacted instantly. “That,” I announced smugly to anyone who would listen, “is either the Citadel at the End of Time, or Chronopolis.”

And what are those things?

The Citadel at the End of Time is the residence of He Who Remains, who in the comics is the final director of the Time Variance Authority. In the comics, the TVA doesn’t control the “Sacred Timeline,” but does monitor all the timelines for potentially catastrophic Grandfather Pardoxes, Butterfly Effects and the like.

Meanwhile, Chronopolis is the capital of the temporal empire of Kang the Conqueror, a supervillain of long standing in Marvel Comics who enjoys time-traveling to different time periods of the same world and conquering each independently, then adding those timelines to his empire.

That doesn’t seem all that efficient, or make sense, really. But the pay is good and he makes his own hours. And what else are you going to do when your last name is, essentially, “the Conqueror”?

As it happens, Kang was already scheduled to make his MCU debut in Ant-Man and the Wasp: Quantumania (2023), where he’ll be played by Jonathan Majors.

Does that name sound familiar? It should, because in addition to his stellar work in Lovecraft Country, Majors also played …

He Who Remains, in Loki episode 6.

So Disney+ foiled my comic book training by, essentially, combining Chronopolis and the Citadel at the End of Time, and substituting a Kang variant for He Who Remains. I can’t even get annoyed, because it’s such a clever storytelling solution.

And what about the rest of the gibberish? Like the dangerous variants of himself He Who Remains mentions? Well, that’s certainly spot on. We have seen many versions of Kang, and most of them are pretty awful people:

First showing up in Avengers in 1964, the original recipe Kang had such awesome future tech that even Thor’s hammer wasn’t much of a threat.

He was born in an alternate timeline in the 30th century as Nathaniel Richards, presumably a descendant of Reed Richards of the Fantastic Four, who reconstructs Dr. Doom’s time machine, takes over the 31st century and then embarks on his “career” as a cross-time conqueror. Due to his constant monkeying with timelines, there are a lot of versions of Kang, maybe an infinite number, but certainly enough to create the “Council of Cross-Time Kangs” at one point. Naturally, one of them betrayed and killed all the others because Kang, he always be Kangin’.

Kang’s only weakness is his love for Ravonna Renslayer, who is sometimes his love interest and sometimes his enemy, depending on the timeline. You might remember a character in Loki with that name, played by Gugu Mbatha-Raw, who went in search of free will. And that, in the terms she stated on the show, means being “the one in charge.” We haven’t seen the last of her, I bet.

Early in his career, Kang got stranded in ancient Egypt. While repairing his time machine (which was hidden in the Sphinx), Kang established himself as pharaoh, called himself Rama-Tut and battled the time-traveling Fantastic Four. Several variants of the FF, in fact, from multiple timelines.

Man, no wonder the TVA is so busy. He Who Remains (Jonathan Majors) appears to be a variant of one of Marvel’s most powerful and long-lasting villains, Kang the Conqueror. (Courtesy Marvel.com)

Immortus is who most Kang variants become if they live long enough, a conqueror who’s had enough of conquering and lives in the extra-dimensional land of Limbo. And if you asked He Who Remains on Loki what his real name is, he’d probably say “Immortus,” since he matches most of the criteria for that version of Kang.

This version of Nathaniel Richards is a teenager who learns of his destiny to become a murderous tyrant, and tries to change it by creating futuristic Iron Man armor and forming the Young Avengers in our current era.

This version of Nathaniel Richards set up shop in 1901 to conquer the 20th century before those annoying Avengers began appearing to foil him. He didn’t succeed in our timeline, but there are probably timelines where he did.

This version of Nathaniel Richards never becomes Kang. But he’s still a time-traveling supervillain. To tell you the truth, Scarlet Centurion is the most redundant of all the Kang variants. Cool red armor, though.

So given all that, the outline of the second season of Loki begins to take shape. He’ll surely have to deal with Kang (or multiple Kangs), a burgeoning multiverse, Ravonna, the TVA, Sylvie, his other variants and maybe, just maybe …

… Agent Mobius on a jet-ski. Come on, he deserves it!