Lost in Time (Chrononauts and Ei8ht) Lost in Time (Chrononauts and Ei8ht)

Time travel has been a staple of science fiction since H.G. Wells wrote The Time Machine in 1895.  The concept has waxed and waned in favor over the past 120 years, but it’s always there as a playground for imaginative writers.  This year, comic book luminaries Mark Millar, Sean Murphy, Rafael Alburquerque and Mike Johnson brought readers along for a ride through time in two new mini-series.

Millar and Murphy’s Chrononauts, published by Image Comics, follows the adventures of two scientists from the future, Corbin Quinn and Dan Reilly.  The first issue is a fairly standard set-up.  However, Millar brings the right dose of small detail and a well-developed sense of humor while Murphy provides a playful sense of wonder that help this story stand out from the time travel crowd.  Quinn starts off by sending video cameras into the past to record historical events.  The footage garners him the grant money he needs to build two time suits that will allow people to travel in time.  Naturally, he takes one of the suits for himself and gives the other to his best friend and colleague.  With the world watching, Quinn steps into the past.  Reilly quickly follows him, only to step into the path of a charging horde of horse-riding Mongols.  So far, so good: a solid set-up with a nice cliffhanger ending. 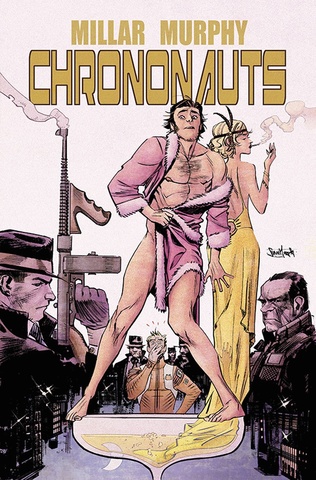 However, in the second issue, Millar and Murphy step up their game.  Dr. Quinn is not the altruistic explorer we often find in science fiction.  His wife has just left him and he’s tired of begging for grants to complete his projects.  Quinn quickly ditches the mission parameters.  In the minute between his time jump and Reilly’s, Quinn has raced across time.  He brought sports cars, tanks, and helicopters to the middle ages and established himself as a Mongol Khan.  That’s not all.  Quinn takes Reilly on a tour of time.  He’s been doing all of the fun things we dream about- setting up shop with Al Capone, dating Marilyn Monroe, and building little kingdoms in every age. Chrononauts has suddenly turned into the time travel story we’ve always wanted.  It’s fun and cheeky, turning time travel tropes inside out.

Of course, Quinn and Reilly can’t turn time into their own personal playground without some ramifications.  The army sponsored Quinn and they’ve been monitoring his activities through his time cameras.  They decide to grab additional suits and bring him back.  The third issue turns into a high-speed chase through time.  Millar and Murphy continue to top themselves, filling Chrononauts with more humor and more adventure.  Plus, there’s always room for one more cliffhanger.  Quinn loses his time suit to the man he displaced as Khan.  Suddenly, Quinn and Reilly find themselves fighting an angry dictator for control of all of time.  Murphy amazes the eye with one of the greatest cross-time battles in comics.  And Millar delights the reader with a story that whips back and forth as energetically as any roller coaster.  Chrononauts is a true time travel treat.

Albuquerque and Johnson’s Ei8ht, published by Dark Horse Comics, is a very different beast.  Albuquerque crafted a story that takes place in the past, the present and the future.  He also invented a place outside of time called the meld.  Albuquerque uses visual clues to help the reader know where- or should I say “when”- a scene a takes place.  Specifically, Albuquerque uses colors to indicate different epochs in time. 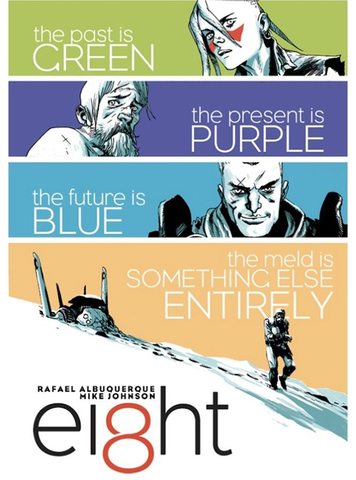 Ei8ht follows the adventures of Joshua, who was sent back into time only to find himself sidetracked into the meld.  Joshua soon learns that an earlier time traveler rules the world of the meld with an iron fist.  He aligns himself with the locals.  They want to overthrow their warlord, known as The Spear.  Joshua simply wants to steal the parts he needs to fix his time machine.  Meanwhile, a subplot follows yet another time traveler from the present who successfully makes it to the distant past- namely, the time of the dinosaurs.  Albuquerque and Johnson weave their story across different times, creatively and captivatingly.  Threads and objects from one storyline show up in another and the events of one time affect another.

Ei8ht is more dramatic- and less humorous- than Chrononauts.  Joshua is grieving a dead wife, rather than ruing divorce proceedings.  Joshua is also struggling with memory loss, trying to find himself even as he’s lost in time.  Plus, Joshua develops romantic interest in a local leader named Nila.  Eight is emotionally complex.  While Chrononauts married humor and adventure, Eight pairs adventure with deeper issues of identity and character.   It’s an engaging story and an impressive writing debut for Albuquerque, who is better known as the artist on American Vampire.   Of course, it is a time travel story with all of the twists and complications that entails.

Chrononauts and Ei8ht are very different time travel stories but they’re both worth checking out.  You’ll be delighted and intrigued by these unique takes on time travel.

I've been curious about both of these books, Chris, not only because they sound interesting but because the previews are pretty and the credits are impressive.

One question: Is Chrononauts connected in any way to the "Millarverse"? Although, to tell you the truth, I don't know how the other Millar books connect. Maybe it's just an expression.

Permalink Reply by Wandering Sensei: Moderator Man on August 21, 2015 at 5:08am
As far as I know, Cap, the Millarverse books aren't connected at all. I've never seen any trace of crossover. I can tell you that Chrononauts was a pretty awesome book, on par with Starlight and Jupiter's Legacy.

Thanks, Chris. I'm always on the lookout for new titles I might like and may have missed, and these fit the bill. (I really like time travel stories.) I think I'll tradewait them, though; sounds as if they are the kind fo stories that read better in a "satisfying chunk" rather than monthly installments.

Permalink Reply by Chris Fluit on August 21, 2015 at 1:58pm
That's probably the way to go, Jeff. I was able to get in on the ground floor with the first issues but at this point it should be simpler to wait for a forthcoming trade than to track down back issues. Plus, they were both mini-series so you'll get a complete story with the trade.

I read the first 2 issues of Ei8ht and I rather liked it, now I just need to find the later issues some where.

Chrononauts I will definitely tradewait. I have a personal ban on Millar on buying a series in single issues. I gave him one last chance during Jupiter's Legacy and got burned again. I only have myself to blame.